In Search of Sisterhood

I am still riding the high from my Reunion a week later. I am still dragging myself through the mundane tasks of each day (which is what I was doing before), but now on the other side of an epic weekend, I think this is what withdrawal feels like. I am SOOOOOO glad that I went back! 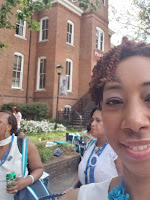 But as you might have guessed, everything did not unfold according to plan and that is just fine. Instead of taking great pictures at specific locations on campus, I took a lot of bad selfies with my college crew who all managed to make it back for this Reunion. I bought keepsakes for some prospective students back at home. I did party like it was 1999, so my body has a few choice words an entire week later. I am looking forward to Homecoming in October, but if life happens, I have fond memories and stronger bonds from this weekend to sustain me until the next big gathering.

My heart is full and in spite of my physical fatigue, my spirit has been uplifted and renewed.

Spelman College was the right place for me 29 years ago when I was an awkward 16 year old who had endured years of feeling like a square peg in a round hole. I found a tribe among young Black women from all walks of life--the daughters and nieces of famous somebodies to the daughters and nieces of local everybodies. We were all just lucky enough to meet at this small women's college. We all knew people who wanted to be there and others who chose not to attend. Back then we had no idea how special Spelman would be for us.

If you find my enthusiasm for my alma mater groan inducing, I urge you to look deeper...this is not another love letter to Spelman inasmuch as it is an acknowledgment of the space she gave me to discover my true self. I assure you, other alumni feel the same intense devotion to their schools for various reasons, usually when they are confident that it was the right place to matriculate for those four or more years. Although I left that campus 25 years ago, it has always felt like home to me. I will not sugarcoat by suggesting that my tenure was Shangri La or utopia, it's just that when I look back over my life and look at all of the other places I have been, nothing else compares. NOTHING.

My excitement for this Reunion had been building for some time, beginning with the pictures that friends had been posting since 2017. I had a great time at my 20th Reunion and had no doubts that I would move heaven and earth to return. And each October during Homecoming as I watched from the social media sidelines because life just didn't work out for me to attend, no worries I thought, because Reunion 25 is coming. 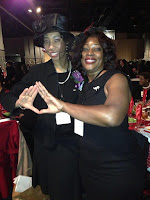 Then last March I received the sad news that one of my classmates had succumbed to breast cancer. I knew she had been sick, and as best as I could, I followed her journey through social media. I even saw the pictures of her at the last Homecoming but didn't notice her frailty or the fact that she was carrying an oxygen tank. Her death floored me. We weren't even close friends, but it was jarring to lose a peer in what I now understand to be the prime of life. And I remembered her father because he and my Dad were once colleagues (which is how we met). Then it must have been six weeks later that another classmate suddenly passed. This time the connection went back to our years in high school; suddenly, I was blindsided by the inevitability of my mortality.

I determined then that no matter what, not only would I return, but I would make it my business to encourage as many of my sisters as I could to do the same. It became a personal crusade to connect and celebrate these women, because life had proven to be too random and unpredictable. I also got involved with the Reunion planning. Initially, that was not my intention, but sometime after Homecoming, I made an inquiry and as it happens in life, asking a question sometimes means that it becomes your duty to find the solution. And God willing, I plan to keep up with both efforts for as long as I can.

And a whole week after my Reunion, I see God at work in so many ways which proves how much I needed that fellowship with my sisters. I had some long-overdue and much needed heart-to-heart conversations and have vowed to maintain those relationships. I met some sisters whom I did not know 25 years ago (yep, even on such a small campus), and I have grown closer to others whom I now consider good friends. I am overjoyed by their accomplishments and achievements. I celebrate their children and grandchildren and what lies ahead on their prospective journeys. I stand in the gap for those in need of fortitude and strength. And as for those that I missed or who could not attend, we were still joined in spirit.

I have many 'sisters' from other aspects of my life, but my Reunion reminded me that the meaning of that word requires more than just a certificate of affiliation. There are a lot of women in this world who are linked to me through the various organizations to which we pay dues; unfortunately, that is the extent of our kinship. Because of the boost I received at Reunion, I resolve to focus my energy on the relationships that nourish my spirit instead of ones that have become too taxing or that I only maintain out of obligation.

Even among my Spelman sisters, some of y'all I can only love from afar. But whenever we are in each other's presence, I plan to enjoy the laughter and the tears. I am grateful for that brief time together that shaped the course of our lives.


We'll ever faithful be, throughout eternity...oh God forever bind our hearts to thine. 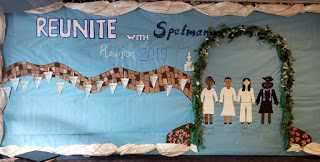 Posted by Ayanna Damali at 5:53 PM