Is This Your Man?

(This comes from the archive of pieces that I started, but did not finish. I saw a FB post today that compelled me to dust this off as a public service to every woman still looking for her Boaz. But please, for the love of God, don't marry any old boy that calls himself a prophet but is advertising for a wife on Facebook...)

Whenever I see a Facebook status, Instagram meme, or a tweet that begins with the phrase, "I don't know who needs to hear this, but..." I prepare myself for the laughs (or the truth). One time it was a reminder to get the clothes out of the washer which is something I ALWAYS need whenever I finally get around to doing laundry. Another time it was a reminder that everybody can't be my friend. 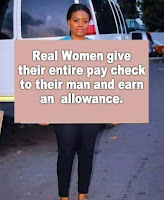 Well today, I am offering that same service to some single person out there. If this or a similar meme was shared by some guy you know, do yourself and the rest of us a favor...tell him to kick rocks, then unfriend/block him, and then move on with your life.

Tell him that nobody asked some dude to tell the world how real women are supposed to act. Nobody needs to take advice from a poorly doctored Facebook meme. Tell him, and I am serious about this, real women are tired of grammatically offensive viral misogynist hotep claptrap.

I don't know why, but seeing this triggered all of the nonsensical debates I had in college about fixed gender roles in relationships. These were deep conversations about last names, killing spiders, and taking out the trash, because that's what some real men were taught to believe defined them...

Before you ask why so bothered if you're such a secure Busy Black Woman--trust me, I am good. I just want to expose some of this booshay because I have lived long enough, been married just as long, and it is my duty here on Beyonce's internet to warn others. So I don't know who needs to see this, but:

Don't let some man-child list all of your kindnesses to him as a obstacle course of hurdles you had to jump over in order to 'earn' his last name. Don't be fooled by his overuse of the word Queen in his descriptions of you on social media. Don't consider it a triumph that your fidelity was finally rewarded with a walk down the aisle in your dream dress with all of your children in the wedding party. You are not best friends with his Mama...you're her tag team partner (as were all of his exes).

This same dude will be calling you out of your name the instant you make some unreasonable request, like watch the kids while I run to the grocery store. He will hit you back with some nonsense about being in the middle of the game or needing time to work on his latest MLM scheme that has y'all in so much debt that you are working two extra jobs. But if you run out of his favorite cereal, he'll be talking shit about you not holding a brother down...

That's not the life you want, Sis. FWIW, this is just my Busy Black Woman's opinion that if these dudes need someone to tell what to do, they should take up dog-training as a hobby. Grown women who are handling their business don't have time for this kind of crazy. I know, that is a generalization that might not apply to every situation, and trust, I know that the dynamics within every relationship differs from the outside looking in. I'm just saying that what works in the hotep world is what works for them and their various baby mamas. Do not be deceived into believing the false teachings of ashen men.

And since I mentioned Boaz, I feel the need to apply my own biblical interpretation--a lot of folks are preaching bad religion. They are out here telling women how to dress and act with no proven results except Scripture, which they misuse. The story of Ruth and Boaz (which is actually a story about Ruth and Naomi but I will get back to that in a few) is often recounted as an allegory about a woman's faithfulness in waiting on God to send her a new husband. And while I have all kinds of issues with that...what if we told the story from the perspective of what Ruth and Boaz saw in each other? Ruth saw a man who was willing to care for her and her mother-in-law; Boaz saw a woman who had been loyal and dedicated to her mother-in-law. Could it be possible that while this is a story about love, we've been focused on the wrong couple?

And as for the virtuous woman in Proverbs 31, have you really paid attention to what is being described there? Of course she's called blessed by her husband and children because who wouldn't love a woman who does all of that work before the crack of dawn? And she's running a profitable side business too. That's the kind of woman this dude on Facebook was advertising for, but he added that she also needs to be short, light-skinned, gorgeous, and able to sing...so damn, I missed out. Meanwhile, I'm questioning his self-proclaimed apostolic status if he leads a church but doesn't have any eligible candidates in his congregation.

You don't have to take my advice, but trust me, your dream husband is not some man-baby who feels the need to publish a superficial list on social media to get attention. Note that he did not ask for a kind and devoted woman like Ruth, or for an industrious, hard-working partner like the proverbial virtuous woman. Instead of telling the world what he wants, he should have explained why anyone would be eager to apply for the job of being his wife (and because I'm curious about the benefit package for lugging around that kind of ego).

Last year when I first wrote parts of this piece, it had been in response to a lot of crazy I had been seeing on Blue Ivy's internet, and each time, I recall wondering if these sisters would have been better off single than having to face the utter humiliation of some dude publicly branding them as doormats. Inevitably, these same self-aggrandizers will go from calling her his Queen to thot as soon as she asks for child support or moves on with someone else. And while he's trashing her, he'll only make time to see his children to take pictures in the matching team jerseys he bought last month.

So I will say it again for the sisters in the cheap seats--YOU DON'T WANT THAT LIFE. And I know, it's getting colder, this pandemic is still with us, who knows how this Election will go, and we could very well be heading for the Rapture, but naw. There is no book of Desparations in the Bible.