If this year has proven anything, it is that anything can happen to just about anybody. Death is inevitable and it will eventually come to claim all of us, even the octogenarian Supreme Court Justice who successfully beat cancer three times. Even she, who took on the white male legal establishment in the 60s and proved that a woman could do more than just type her husband's legal briefs: she could attend her own classes, raise a child, and manage to graduate at the top of her Columbia Law School class. Even Ruth Bader Ginsburg, known affectionately and reverently as the Notorious RBG. 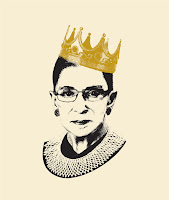 I will not waste any time on tears. That isn't to say that I am not saddened by her death, but I won't waste any time worrying about the political shenanigans that are already underway. Because right now, the time for long-winded think pieces on the hypocrisy and virulence of white supremacy in its last desperate, dying stages isn't worth the effort.

Instead, I will share a couple of stories that illuminate why I was such an unabashed #NotoriousRBG fan, and how just like her, I plan to fight until that day when Death comes to collect even me, the Busy Black Woman.

I first learned about Ruth Bader Ginsburg the summer I interned for the Women's Legal Defense Fund (now the National Partnership for Women and Families). Because I was in college, I simply thought it was exciting to have another woman nominated to the Court. The confirmation hearing for Clarence Thomas had been an eye-opening experience for me, given the uniqueness of being at Spelman at a time when many of us were grappling with the meaning and implications of feminism. And it seemed politically correct to counter-balance the appointment of a conservative Black man on the Court with a liberal white woman.

Also of note, the semester before my internship, I took a Constitutional Law class as part of a sequence of pre-law classes to prepare for law school. I will share some anecdotes from that experience at another time (because it was at Morehouse), but the main point to this is to mention that when we studied a series of cases about gender discrimination, I was unaware that many of those cases had been argued by Ginsburg. Color me awestruck to learn that she was the Thurgood Marshall of the Women's Movement, so I was enthusiastic about her selection and confirmation. (BTW, I hate those kind of comparisons, but suffice it to say she applied a similar strategy in attacking gender distinctions in the law.)

Fast forward to several years in the future when I had a chance to hear Ginsburg speak at some event where I was still mesmerized and charmed by this little lady who swore that her best friend on the Court was her ideological opposite, Antonin Scalia. I was in the official civil rights advocacy phase of my career and our consortium was preparing to litigate at least two major affirmative action cases, and he was at the top of our list of nemeses. Yet, it was fascinating to hear her describe their friendship such as their mutual love of opera and dining at a certain Italian restaurant. The fact that she didn't take their ideological differences personally seems so retro given how ardent disciples of both are now engaged in Mortal Kombat over each successive Court vacancy.

That Ginsburg was dubbed Notorious by her admirers and probably called worse by her detractors is a testament to her insistence that she be heard. She authored many opinions during her tenure on the Court, a time of monumental shifts within the legal profession. Coincidentally, a lot more young women and people of color attended law school during her tenure, so we had a lot more reading to help define our generation's advocacy. Ginsburg became our shero because she was so relentless and indefatigable--and this was before we knew about her multiple cancer diagnoses and the workout regimen and the fact that she probably hasn't slept for more than four hours a night since her third year of law school.

That brings me to one of the criticisms I have seen on social media--that she should have relinquished her seat when Obama purportedly asked her to resign. I disagree. She was confirmed to a lifetime appointment, and much like a few other women that I have come to respect, the concept of dedicating one's life to a particular cause typically means that the cause itself becomes one's reason for living. There is no such thing as retirement...die on the field in battle, not on the sidelines. And it was her seat, not Obama's so she had the right to decline his request. She knew as well as anybody else that her departure would launch a thousand missiles from both sides of the political spectrum, and perhaps once she knew that she would not outlive this current Regime, she decided to bequeath us with sufficient motivation to press on with the movement.

Movements change things. Those who are now second-guessing her decision to stay on the Court are thinking in terms of monuments. Monuments are content to stand still to be admired. Anyone who thinks that Ginsburg was concerned about admiration missed the point of her entire career. 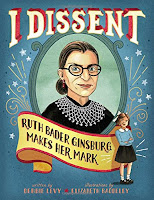 The point was not to become a meme or an inspirational Halloween costume. If her life could be summed up in one word, it was dissent. The norms of her upbringing had been that true happiness and fulfillment for young women could only be found in a family. She had both a husband and a child by the time she graduated from law school, but decided that she had more to offer the world. So she dissented. She eventually found a job as a professor, but then resolved it was not enough to shape the young minds that went forth to challenge the status quo; she had to be willing to march into battle as well. So again she dissented. She had ascended to a seat on the highest court in the land and had served that institution for more than a generation, but instead of enjoying a well-deserved retirement, she would vacate in her own time. Another dissent.

I saw the RBG documentary (2018) when it was released, and it hinted at a few of her personal shortcomings. I took note of one in particular, but it was in the dramatized movie of Ginsburg's life On the Basis of Sex (2019), that it became more clear. Like everyone who aspires to and achieves greatness, there are high costs. In her case, Ginsburg was revealed to be a less than involved mother. Her husband became the happy homemaker and made the sacrifices (and connections) that propelled her career. She acknowledged that, and while there is no cup for measuring maternal instinct my guess is that hers was small. Her single-minded focus on dismantling gender inequality didn't give her much time for mothering, but it empowered women to choose their own path to happiness and fulfillment.

Another critique on social media has been the elitist blind spot she (and the rest of the Court) have had with respect to hiring diversity. I agree that she could have done a better job of democratizing the fraternity of Supreme Court law clerks, as it is a rarefied gateway to every elite space in the profession: white shoe law firm partnerships, executive appointments to the Department of Justice, endowed professorships, the federal judiciary, and possibly back to the Supreme Court as a justice (as was the case for John Roberts, Elena Kagan, Neil Gorsuch, and Brett Kavanaugh). Ginsburg should have hired a more diverse assortment of clerks, but so should every justice. It is a blight that everyone except for Clarence Thomas and Sonia Sotomayor share. (And yes, that includes our other SCOTUS hero Thurgood Marshall as well.) But it is a bridge too far to assert that her failure in that respect is proof that she did nothing for people of color or Black people in particular.

That kind of rhetorical nonsense is the stuff of zero-sum cancel culture. It is the bullshit logic of the keyboard whiners who never gear up to fight because they would rather complain about there not being any vegan snack options. Don't be so precious about losing a battle that has not yet been fought.

Of course the odds are against us. Of course this DESPOTUS and his Regime believe this is some kind of flaming cross--a sign that they can still stack the deck and win everything. Maybe. But so what?

Ruth Bader Ginsburg wrote mostly dissents as a member of the Court, and if that record is to be compared to the number of cases she won as an advocate, that could brand her as some kind of sore loser. But if you are mourning her death, then you should already know that she didn't mind losing. The point was to fight on anyway. For example, Ginsburg didn't write the majority opinion in the Lilly Ledbetter case, but her dissent helped to inspire the law that sought to correct the injustices Ledbetter had endured.

Don't dis the RBG for the state of the world if you don't know basic civics (Supreme Court justices don't legislate from the bench). Don't come for the RBG if you aren't registered to vote or only think about elections every four years (there are nine seats on the Court, but hundreds of federal judgeships and McConnell has been green-lighting every Trump appointee that can spell). Don't get so caught up in ideological purity that you would rather ruminate on her shortcomings instead of strategize to move the needle forward on progress. Don't give up the fight just because the battle will be fierce.

Posted by Ayanna Damali at 5:53 PM