I ask myself this same question every time I watch more than a few minutes of Flashdance: how did this movie ever get made and why was it such a big deal? 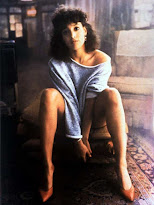 Or is that just my imagination? Because when Flashdance came out in 1983, I recall that it was a huge hit (even though it was rated R, so I didn't actually see it until many years later). I remember watching the music videos for What A Feeling by Irene Cara and Maniac by Michael Sembello and thinking that they were exactly the same (they aren't). I wanted to cut my tee shirts to fall off my shoulder so that I could look effortlessly cool like Jennifer Beals, the star.

In fact, I wanted to be Jennifer Beals. I wanted her hair, her legwarmers, I wanted to break dance and table dance just like she did...luckily my parents had better ideas and enrolled me in ballet class. As you know, I went on to take ballet for many years, so by the time I finally saw the movie and realized that was the whole point--that she wanted to be a ballerina, there went my childhood dreams and naiveté. How come no one told her that you can't go from the strip club to the Pittsburgh Ballet without any ballet training, no matter how flexible or agile you are, and in spite of the generosity of a nice elderly white lady who can arrange an audition?

Of course, that was the 80s and I'm sure crap like that movie propelled many a young girl to beg her parents to let her take dance class, only to show up to learn that first day, NO you cannot wear black jazz shoes nor wear your hair all over your face without receiving a strong rebuke from the stern ballet mistress.

Ironically, I was watching Flashdance and contemplating its enduring absurdity as I became aware of a #CancelNetflix campaign on Twitter, related to the release of the French film Cuties about the sexualization of underage girls in competitive dance teams. I read through a few tweets and quickly realized that the controversy was unnecessarily overblown and politicized, so I moved on. But then I read this article about how the director is now receiving death threats, and wow. Judging from the tone of the tweets, I was right to ignore the hashtag initially; however, it might be timely for us to address the issues raised by this film.

Let's start by dispensing with the politicized outrage because really...your biases are showing like a church lady slip. You ain't fooling anybody with all of this pearl clutching over exposed midriffs and metallic eye shadow. It was all good when you were fans of Dance Moms, a show that is still airing and that features the very world of dance competition at issue in Cuties. And surely some child in your orbit went through a phase when they begged you to turn over your phone so that they could watch JoJo Siwa videos nonstop.

You are suddenly concerned about pedophilia now? Have you been clothes shopping for a child lately? Have you seen the shows on Nickelodeon or the Disney channel? Do you listen to Kidz Bop? Did you even look into the backstory about Cuties before you decided to comment and retweet conspiratorial nonsense? Or did you just react to the possibility that Barack Obama, Hillary Clinton, and George Soros  all walked into a bar and colluded with the Chinese bartender to mix the ingredients for this COVID mocktail hoax that has killed 193,000+ people?

Second, let's analyze the timing of this, just not in the context of politics. A few weeks ago, we learned a new acronym that brought more pearl-clutching from decent respectable ladies who would never...and for what it's worth, I am not walking back what I wrote. But I am just taking note that reactions are very much dependent on the messenger. Y'all weren't this animated when Britney Spears went from the Mickey Mouse Club to being Toxic.

Or maybe you were, and now that I have my own impressionable five year old, I am more aware because I too wonder about the conflicting messages we send our children about their bodies. I worry about this culture of competitive dance as I prepare for a new season of ballet classes via Zoom. I think back to what got me hooked on dance, and indeed it was the flash. It was watching hours of the Solid Gold dancers, Soul Train, Fame, and the synchronized choreography of the Beat It video. It was also watching Dance Theatre of Harlem and the Alvin Ailey American Dance Theatre performances on public television. It was seeing Mikhail Baryshnikov and Gelsey Kirkland dance every Christmas for many years in The Nutcracker. However, the reality was this iconic speech that Debbie Allen delivered in the first season of the TV show Fame. 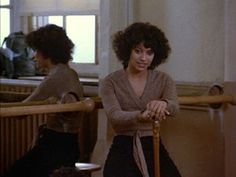 I put in the work, had big dreams, but I was tall and Black in the 80s. I felt more comfortable at the ballet barre because no one made fun of my lanky limbs. In the corps de ballet we moved with control and precision, so that was my comfort zone. Through dance I learned discipline and commitment. I also learned to regard my height as an asset even though I wasn't even the tallest dancer...that was my dear friend Karen who stood six feet tall before she effortlessly rose to the tops of her toes in pointe shoes. Those fundamentals allowed me to continue dancing (and to perform, thank you very much) well into my eighth month of pregnancy and beyond into my 40s. Hell, for my 50th Birthday I am thinking of pulling a JLo at the Superbowl! (Note that I said JLo, not Jennifer Beals, who didn't even do her own dancing in Flashdance...)

As a society, of course we send conflicting messages to children, regardless of gender. We have gender reveal parties to determine what color baby clothes we will shower on new parents. Somehow, we have determined that actually matters, even though we also claim to believe gender is a construct (well some of us do). Which is why it seems rather predictable that a majority of the #CancelNetflix crowd tend to be those who were just fine with voting for a man who once exploited his ownership of a beauty pageant as license to go hunting for genitals to ogle and grab.

Finally, it seems rather fitting that the director of Cuties, Maïmouna Doucouré, is a French Muslim woman. I'm guessing she knows enough about modesty to issue an indictment on western cultural hypocrisy, which appears to be the entire point. After all, France is the land of the can-can and Moulin Rouge, but also Edgar Degas so go figure. From what I can tell (and I haven't seen it yet), this film has become a convenient pawn in our culture wars because of the U.S. marketing and it's mature audience rating. The U.S. poster is problematic...but so is competitive dance, in my humble veteran dancer now dance Mom opinion. And how would these complainers have felt if the film had been rated PG since the point is to make people uncomfortable?

We should be uncomfortable. We should feel just as horrified as I was a few years ago when my Niece took classes at one of those competitive team factories. We were invited to her summer recital, and though she was dressed age-appropriately, that was not the case for many of the performers that day. The worst part was when my daughter, still in diapers and sucking on a pacifier started dropping it like it was hot in the aisle to one of the songs, mimicking what she saw on stage. That audience was full of applauding parents who had paid top dollar tuition for what was essentially a kiddie burlesque revue.

If we don't want our children to emulate Cardi B, then we've got to give them Misty Copeland as a viable alternative. And if you think this is my elitist preference for ballet showing, I assure you that it isn't because just the other night, my child and I both were transfixed by a contemporary step dance company. I know that there are other layers to this conversation, such as the institutional racism of classical dance that limited options and opportunities for dancers of color, and I am willing to concede those historical biases are yet to be overcome. However, from what I have observed, competitive dance is just another example of how everything ain't for everybody.

One more point to clarify before I conclude, yes I did joke about wanting to pole dance like JLo, but allow me to point out that she also is a lifelong dancer. If you want to have that kind of flexibility, stamina, and strength, it requires training, not just talent. Talent will distinguish you in a chorus line, but training is how the body double in Flashdance fooled me as a child. Training is why Debbie Allen can still lead a dance class that rivals half an hour of zumba. Training is what you need to ensure that your child is getting in addition to those expensive costumes and glamour shots.

The controversy over Cuties is precisely that as well--this film might not be your cup of tea for any number of reasons. But if you didn't cancel your Netflix subscription after Tiger King but you are an ardent fan of Dancing with the Stars...then know that I am judging you. But I might reconsider if you slide me your password.

Posted by Ayanna Damali at 5:51 PM