This piece will contain a few spoilers, so if you have not seen the film, I strongly encourage you to do so unless you have been convinced that it is a waste of time, in which case, I urge you to read this and then reconsider. Please and Thank You. 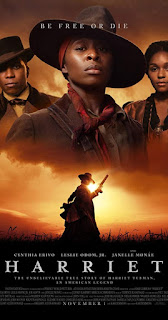 In the weeks leading up to the release of Harriet, I saw a lot of chatter on Twitter and I am sad to say that I read far too much of it prior to seeing the movie; however, I ignored most of it. It was a good movie, I recommend it, and if you are weighing whether to see it, I implore you to do so as soon as possible!

I sat in a theater that was partially full of senior citizens for a matinee showing, which is not surprising for the middle of the week, but a little disappointing when I think back to not yet two years ago when I first tried to see Black Panther a few days after its release. It was a midweek morning and I specifically chose an out of the way theater, but showings were sold out for the entire week. I lucked up and saw the movie a week later at a multiplex in New York where there were shows every half hour and the theater was still packed with people, many of whom were seeing it for the second or third time. I mention this at the outset not to shame anyone who saw Black Panther multiple times (because that was a great movie), but to point out that this movie should have done better than fourth place this weekend.

I also felt that it was important to reference Black Panther in response to the concerns about Cynthia Erivo being British. Chadwick Boseman is American, and yet I don't recall any misgivings about him taking on the role of an African King. And there weren't any complaints about Boseman's co-stars Angela Bassett, Forest Whitaker, Sterling K. Brown, or Michael B. Jordan, also American actors. Nor a lot grumbling that the Black Panther had been written by an old white guy (the late great Stan Lee). Yeah I know Wakanda is a fictional place, but it was purported to exist on a real continent as an independent and thriving utopia that had been unspoiled by colonialism...which goes beyond the realm of fantasy into delusional. Not a word or a whiff of outrage.

I read a few of Cynthia Erivo's past tweets and yeah, a whole lot of y'all say problematic shit on Twitter. That doesn't excuse her statements, and she deserves the appropriate dragging. And maybe there was another American actress who could have filled that role, but it isn't as if British and American actors don't ever cross the pond and switch places. Meryl Streep was Margaret Thatcher. Sir Anthony Hopkins was Hannibal Lector. Idris Elba was Stringer Bell. Renee Zellweger was Bridget Jones. Naomie Harris is currently an American cop in Black and Blue. And do you know why we rarely notice? Because they are actors and that is their job.

But since we are apparently keeping score, Black Brits have been getting a lot of American roles lately so be sure to boycott the next film or favorite project that stars Lupita Nyong'o (Us), Daniel Kaluuya (Get Out), Gugu Mbatha-Raw (A Wrinkle In Time), John Boyega (Star Wars), Chiwetel Ojiofor (The Lion King), Thandie Newton (Westworld), David Oyelowo (Don't Let Go), and Carmen Ejogo (True Detective). Remember, those are roles that could have gone to Americans, so let's stay righteously mad Every Single Time. And why stop with Black Brits when there are Black actors throughout the diaspora who are infringing on the rights of American-born actors: Winston Duke and Lorraine Toussaint (Trinidad and Tobago), Letitia Wright (Guyana), Sidney Poitier (Bahamas), Grace Jones and Sheryl Lee Ralph (Jamaica), Danai Gurira (via Zimbabwe), Uzo Aduba (via Nigeria), Tatyana Ali (via Panama and Trinidad and Tobago), Laz Alonso (via Cuba), and Harry Belafonte (via Jamaica).

America First! Send them back! Build the Wall! That's how you sound.

As for Erivo's performance, she was excellent! Leslie Odom, Janelle Monae, Vanessa Bell Calloway, Clarke Peters, Vondie Curtis-Hall, Daphne Maxwell Reid, and my line sister (I saw you girl :) also gave noteworthy performances. I am unfamiliar with the other white actors, and their presence on screen was one of the weaknesses of the movie. White actors in these historic pieces can either come off as cartoons or ciphers if not used adequately, and unfortunately the performances of Joe Alwyn and Jennifer Nettles fell short of the brilliance we experienced with Michael Fassbender and Sarah Paulson in Twelve Years A Slave. But, I also recognize the desire to elevate this narrative above the condition of enslavement, so it was an interesting creative choice to marginalize the white characters.

Which is why the rumors of a white savior was such a reach. Mind you, there are benevolent white people in this movie, because there were white abolitionists, who sheltered runaways, provided them with food, clothing, and safe passage. Not to be confused with the slaveowners, overseers, and bounty hunters...so yes, there are depictions of good white people because that's how the Underground Railroad worked. Additionally, there is no need for all of this ruckus over the existence of a Black bounty hunter. Don't be that naive and willfully ignorant. Some enslaved people did not leave the plantations; others found the means to survive the best way they could. In a biopic, creative license is what makes the narrative interesting and engaging. If you prefer the straight-forward factual story, then watch a documentary or go to the Harriet Tubman Underground Railroad National Historic Park. Otherwise, I need more of you to learn your history from reading books, not an #ADOS twitter/instagram rant. 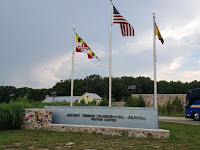 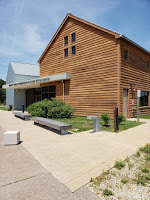 Or you can revisit one of the previous movies made about Tubman's life. I was recently reminded of this gem that I saw back when I was in elementary school. Thanks to inclement weather, indoor recess, and what passed for being 'woke' in the late 70s and 80s, I had the memory of these stellar performances by Ruby Dee and Cicely Tyson. The current movie dramatizes Tubman's life, which is what a biopic does.

Thus, I really appreciated the treatment of John Tubman's story because it offered a perspective on the complexities and tensions on marriages between free and enslaved people. Instead of the commonly accepted story that her husband was a scared man who did not support his wife's desire for freedom, we get a sympathetic portrayal of a man who sought it for her. His choice to move on was presented as practical, not out of spite or from a lack of love for a woman he never thought he would see again. I also appreciated the nod to the earlier films where Harriet's parents would not look at her in order to truthfully say that they had not seen her. It highlighted another emotionally challenging component of relationships among enslaved people--the illusive structure of enslaved families and the extraordinary effort she undertook to reunite hers.

There were a few scenes that I thought were gratuitous and unnecessary, but nothing egregious. The greatest flaw was an omission, so I agree with the criticism that Tubman's later work as a Union Army spy got the footnote treatment. That is the one aspect of her life story that most people know the least about. The Combahee River Raid, which is referenced in Glory (one of my favorite movies), would not have been successful without Tubman's leadership. Yet, it isn't included in Ken Burns' Civil War series either, so that might also reflect a lack of serious historical scholarship on the vital role of women and enslaved people in the war.

I have had some time to reflect on the sexist nature of the backlash, fueled at least in part by the ashier elements on Black Twitter. These are the same dudes who never pass up an opportunity to bash Black women whether it is Oprah, Kamala Harris, victims of sexual assault, and now a film about a real-life American shero directed by a Black woman. I expect conservative movie reviewers to dismiss the film as ideologically driven because they regard any critical examination of slavery as revisionism. But when there are Black people denouncing as trash a movie that they haven't seen (or when they have an obvious agenda in disparaging it), then that is the exact opposite of wokeness.

We're boycotting because Comcast is the distributor and look at their role in the Byron Allen case. The same Byron Allen who calls himself a protege of Rupert Murdoch and works in partnership with Sinclair Broadcast Group. Did he call for the boycott of this movie because he plans to produce an alternative on the Weather Channel?

We're boycotting this film because we're tired of seeing slave movies. In the same year that we commemorate 400 years of the African introduction to this continent in bondage, we are ashamed of the condition that was imposed on our ancestors? Y'all better stop listening to Kanye West...

You ain't woke if you would rather see another stale installment of The Terminator franchise, but at the very least that would be honest. I am not saying that Harriet is the best film or that it doesn't have shortcomings. But we have flocked to the theaters to see all kinds of movies, even Kevin Hart movies, so surely this is better than Night School. At the very least, see it and judge for yourself. 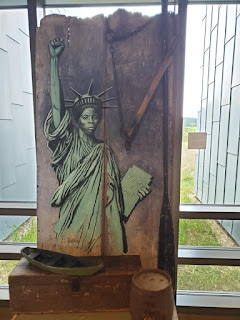 Posted by Ayanna Damali at 1:05 AM