Seeds in the Ground

The Busy Black Woman has had enough of the bickering and whining and back-stabbing and hysteria! So Mother is going to share some advice with you, which you will need in the coming weeks. First of all, WASH YOUR DAMN HANDS WITH SOAP. They still have plenty of that at the store. I know, it dries out your skin and makes everything ashy and hard so you look like you've been playing in flour, but just do it. Because the revolution cannot afford to lose you to some preventable disease. Besides, antibacterial hand gel will not work against a virus.

Second, I had another great epiphany the other day (a lot of those lately, I know) wherein I realized that the 60s were to our Boomer parents and grandparents what the 90s are to us Generation Xers. Because it was 30 years ago this month that House Party was released, which technically makes Freaknik our Woodstock! Therefore, accepting that one of the perks of middle age is that I'm right about most things, I am gonna give a lecture just like my parents and their friends used to give us whenever we thought we knew more than they did.

In case you forgot, the Busy Black Woman taught American History and Government online in a past life, so this lecture will consist of some outside readings, a few bad jokes, and at least two stories from my past. I promise the glaze that overcomes your eyes will subside in time, so to give you some perspective on what is happening right now, we must first take a trip back to 1988.

Picture it, Atlanta, in the middle of the summer, there was a convention in town, and the goal was to select a candidate who could beat the current Vice President, George Bush the First (only then we had no idea that he would be the first Bush to occupy the Oval Office). The Democrats had been humiliated in the previous election against Ronald Reagan, so you would think that the effort to choose an electable candidate would have yielded a better result than Michael Dukakis, whose cousin was and is still better known...

Back then, the most prominent Black leader was the Rev. Jesse Jackson. He had been a candidate in 1984, so this was his second run for the White House in the Democratic primary. (Ordinarily, I would pause right here to share a story about his first run and how that was the first time I wrote a political opinion piece back in the sixth grade, but another time.) At my conservative Catholic high school, most of the institutional support was for Bush, so the primaries were only of interest to the Black students (another story, but for another time). The field included a certain Uncle Joe Biden (DE), who was making his first bid for President until he had to withdraw due to an embarrassing plagiarism allegation. The other choices included Sen. Al Gore (TN), Sen. Paul Simon (IL), Sen. Gary Hart (CO), Rep. Dick Gephardt (MO), and the aforementioned Gov. Mike Dukakis (MA).

Now, to move this story along, your first homework assignment is to read up on the convention machinations later, and then note that Jackson delivered one of the greatest convention speeches until Barack Obama's keynote at the 2004 convention. Despite coming in second place, Jackson was not chosen as Dukakis' running mate and they lost. While it was naive of us to assume that America was ready for a Black man in the Oval Office in 1988, it took us twenty years of working through the party system to get us to that reality in 2008. It was the seed that was planted by Jackson's historic run, one that was ready to bloom once the stars aligned accordingly. (Don't worry, I haven't forgotten about Shirley Chisholm...keep reading.)

After you have read Jackson's speech (seriously, the speech is required reading), you will note that after a typical Baptist preacher intro, in which he names and thanks his family and friends, he offers a formal greeting to former President Jimmy Carter, elder statesman of the Democratic Party as well as a nod to fellow civil rights activist Mayor Andrew Young. Ironically, ten years earlier, Carter had fired Young as Ambassador to the United Nations; now he was the mayor of what would become the capitol of the new South. Jackson then went on to invoke the names and places from civil rights events that laid the groundwork for his journey to that stage. Specifically, he calls the names of those who were denied a seat at the 1964 Convention (thus, your third reading is Fannie Lou Hamer's famous testimony and the shenanigans President Johnson attempted to keep her out of prime-time).

So marinate on that for a moment--Jackson got to reap the seeds that had been sown just twenty-four years earlier by the Mississippi Freedom Democratic Party. And Obama got to reap what Jackson and his Rainbow PUSH Coalition had sown twenty years later. So my beloved, your time is coming. The seeds are in the ground.

I know how hard it is to wait and see what the end will be, but impatience is a vice, not a virtue. Some people do not live to see the harvest of their labors, which can be unsettling and disheartening. But you need to have faith. (OK, that veers into sermon territory, which I am not equipped to give, so let's get back to the lecture.) If you want to see some tangible proof of how progress works, then look at how Jackson's speech invokes several themes that have become synonymous with the Democratic Party. This speech references a multi-hued coalition, support for the working class, unfettered access to the ballot, universal health care, a living wage, LGBTQ and women's equality, common-sense gun control, and affordable housing. Here is one key line in that speech:


Progress will not come through boundless liberalism or static conservatism, but at the critical mass of mutual survival.

Progress [through] the critical mass of mutual survival. Not from the extreme poles of ideology, but on common ground. Because Jackson repeated that sentence and that theme, I am tempted to believe that this was some prophetic wisdom he saw fit to impart to future generations. We won't get very far unless we find a way to work together as a united party with a mission to serve the common good. Kinda like the current Democratic Party platform.

Oh, and here's a footnote to fill in a few gaps. When Jackson ran in 1984, he was the second African American to seek the Presidency in the 20th Century (Frederick Douglass did not seek the office, but he was nominated in 1872). One hundred years later in 1972 Rep. Shirley Chisholm (NY) was the first to seriously seek the office. When she ran, she was dismissed by both the nascent Black political establishment and the polarized women's movement. I encourage you to listen to this excerpt from her campaign announcement and see if anything sounds familiar. 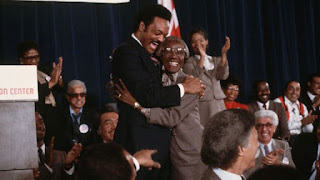 When Chisholm died in 2005, it was before Barack Obama was elected and before Hillary Clinton was nominated. She did not live to see the harvest, but she still planted the seeds in the ground. The disappointment some of us feel by the choices we have now, having lost the four women from the U.S. Senate as candidates is real. But when we look back to when Chisholm ran in 1972, to when Rep. Geraldine Ferraro (D-NY) was the first woman to be nominated for Vice President in 1984, we see the evidence of the seeds they planted. Our time is coming.

Those of us who have been around long enough to remember these past battles know how frustrating it is to trade idealism for realism. But we have watched the incremental changes that have brought us to this moment and know that while pragmatism wins the battles, idealism fuels the fight. In my lifetime, we almost elected a woman to succeed a Black man who had previously lost a congressional campaign in 2000. So from what had been the most diverse field of rising political stars in my lifetime: a Latinx former Cabinet Secretary and big city Mayor (Castro); a Black State Attorney General and U.S. Senator (Harris); a Harvard professor, U.S. Senator, and creator of a federal agency (Warren); another big city Mayor and U.S. Senator (Booker); a gay naval intelligence officer and mayor (Buttigieg); an Asian American venture capitalist (Yang); and two other women in the U.S. Senate (Klobuchar and Gillibrand)--yeah, it's a blow. But our time is coming.

There is a place for idealism in politics; it's just not always in the seat of power. Thus, from that collection of former candidates there could come a Vice President, future Cabinet secretaries, Supreme Court justices, Governors, Senate leadership, etc...if y'all get over your feelings. The shortcomings of an imperfect leader can be overcome by a good team.

Therefore, if your preferred candidate doesn't get to accept the nomination this summer, you do not have the luxury to stay home to sit this election out. This country cannot survive another four years of this moronovirus incompetence. Nor shall you vote third party in protest. Those folks never truly intend or desire to be President. Show me what Lenora Fulani, Ralph Nader, and Jill Stein have done for this country after they lost and I will remind you how we ended up in a never-ending land war in Asia with a fake-tan pussy-grabbing reality TV show wannabe dictator.


I know, you wanna cancel folks over past mistakes that had unforeseen and catastrophic consequences. Like this 1988 interview on the Oprah Winfrey Show. Yeah, she deserves to be dragged for unleashing this pestilence on the land, but I assure you that everyone has committed major regrettable acts. I think a certain well-meaning, but tone-deaf person should regret recording this album. But living long enough has given us the hindsight and wisdom to know better for the future. Not all seeds are good, so be careful what you plant.

A few closing thoughts: I was never at Freaknik and no one saw me there. Through the years, I may have regretted my choices, but never regretted making the effort to vote. For the record, I was not old enough to vote in 1988 nor was I born in 1972. Yet and still it feels kind of liberating to be to be so unbothered about being old enough to remember things that I can incorporate into a lecture. So no, the readings are not optional, and maybe I can still dance like they did in House Party. The final this fall will be whether you choose to tend this garden so that good seeds can grow and flourish, or if you prefer to bulldoze the plot to make way for a big beautiful border wall. That's the lecture--choose wisely and wash your hands.
Posted by Ayanna Damali at 12:38 AM