The Liberation of Mammy and Jemima

I saw Aunt Jemima trending on Twitter the other night, but I didn't see anything noteworthy or out of the ordinary until the next morning when a friend posted this article. In response, I posted this on the Busy Black Woman Facebook page. To preserve those images and to offer a few reflections, I wanted to index everything here. Apparently, a lot of people were surprised to learn about Aunt Jemima's origins, so allow me to offer this history lesson in the form of a lecture I would offer if I were teaching one of my favorite classes from college, Images of Women in the Media.

Let's start by distinguishing Aunt Jemima from Mammy, the ubiquitous icon that has held pennies, cookies, and salt for more than a century:

Many people assume that the two images are interchangeable, when in fact, it is important to highlight that Mammy is the archetype, a pop culture expression of an antebellum Black mother figure. Various renditions of her have included Aunt Jemima, Mammy from Gone with the Wind, and even modern drag versions as with Martin Lawrence's Big Momma or Tyler Perry's Madea. Aunt Jemima is most commonly known to us as a brand name, one that originated as a minstrel character.

The name came from one of several songs, credited to Billy Kersands, a Black minstrel performer, who is believed to have written the first of several versions of Old Aunt Jemima in 1875. This version is not credited to him, but the lyrics are similar. The song and character Kersands created were adopted by a white minstrel company performing in blackface, which was a very popular form of traveling entertainment. In 1889, an audience member named Chris Rutt saw the character and decided to adopt her likeness for advertising his pancake mix. He then did what was common whenever white folks appropriated the creations of others--he trademarked the name and likeness. Here are a couple of early ads: 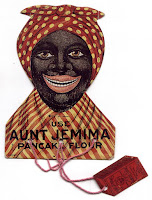 As you can see, Aunt Jemima closely resembles the classic Mammy figure. The woman whose image was used for the original ads was Nancy Green, a formerly enslaved woman who was first hired by the Pearl Milling Company to serve as the face for the brand. She held that position until her death in 1923. By that point, Green's own life story had been re-written to support the mythology of "her" famous pancake mix... 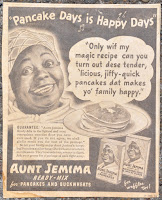 Of course, since Aunt Jemima was a fictional character, other actresses were hired to continue on in the role. Lillian Richard (1891-1956) was hired in 1925 to travel throughout the South as the character, while Anna Robinson (1897-1955) was hired for the Chicago Worlds' Fair in 1926. By then, the company was owned by Quaker Oats and Robinson was prominently featured in their print advertisements. Other actresses to fill the role included blues singer Edith Wilson (1896-1981); actress Ethel Ernestine Harper (1903-1979); Quaker Oats employee Rosie Lee Moore Hall (1899-1967); and Aylene Lewis, who portrayed the character at the Aunt Jemima Pancake House in Disneyland from 1955 until her death in 1964.

(I'm a bit stuck on the fact that there was a chain of Aunt Jemima Pancake Houses/Kitchens, even in Canada...and no, we are not just going to overlook the fact it was once a Disneyland attraction until 1970, but keep reading.)

Mammies like Aunt Jemima were not just characters selling products. They were part of a nostalgia machine that manufactured and sold romanticized images of an idealized past. For example, two major Hollywood period movies set in the antebellum South featured mammy figures--in fact, they were portrayed by the same actress, Hattie McDaniel. We are all familiar with her quintessential Mammy from Gone with the Wind (1939), the role that won her the Best Supporting Actress Oscar in 1940. She also played Aunt Tempey in Disney's Song of the South, released in 1946, for which her co-star, James Baskett, won an honorary Oscar for his portrayal of Uncle Remus.

(A quick pause here to acknowledge that GWTW was just removed from HBO streaming services to much consternation, and SOTS hasn't been seen since the 1980s. I will definitely dedicate some time to addressing both movies in a future post. But I also wanted to note that SOTS is based on folklore that Joel Chandler Harris gets credit for having written because he got the copyright, and I will just let you interpret that for yourself. If you have never seen the movie or want to learn more about it, this site is a good resource.)

The Mammy figure, as depicted in McDaniel's onscreen roles and the advertising campaigns that featured Aunt Jemima, was intended to reinforce white comfort and Black servility. Mammies were mother figures who cared for everyone, especially the white children in the households where they worked. Black women were employed as domestics all over the country, but it was the specific use of happy southern Black mammies, uncles, and pickaninnies on pastoral plantations that seemed to be the most enduring. Perhaps it was the times--the country was emerging from the depths of the Great Depression, but not yet engaged in the second World War. Content and servile Black people were not demanding the right to vote or organizing with other urban immigrants to form labor unions.

And good, benevolent white people loved and depended on their mammies. She was a confidante and protector. In the case of Aunt Delilah in the original Imitation of Life (1934), she was the inspiration for a lucrative pancake business on the Atlantic City boardwalk... 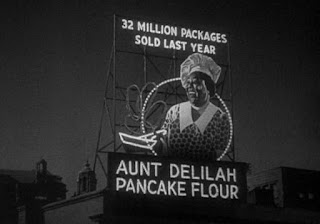 In the remake of Imitation of Life (1959), Annie wasn't supposed to be a mammy, but that didn't  prevent her employer, Lora, with whom she lived for many years, from knowing anything about her private life until it was too late. Mammies only lived to please others and only mattered in their subjugated context.

If a family was not lucky enough to have a mammy, maybe there was a gentle Uncle who served the children semolina for breakfast and rice with their dinner. Or maybe he taught them how to dance. 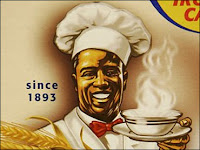 Thus, the fact that Aunt Jemima was licensed to Disney as an attraction until 1970 is a curiosity that can only be explained as peak white nostalgia. It was a conscious choice that the happiest place on earth would maintain a relic of the antebellum past during the Civil Rights Movement. One can only surmise that was because Aunt Tempey wasn't as well known for her biscuits... 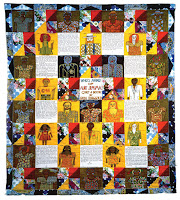 By the 1980s, Mammy was being reclaimed and liberated by Black artists such as Betye Saar and Faith Ringgold. Black woman (my Mom included) had realized that it was imperative to re-imagine Mammy in opposition to the ways she had been remembered fondly for her docility and loyalty. Instead of looking upon her with shame, what if we revered Mammy? Only a badass Black Mama could be so proud and powerful as to raise other folks' children, cook their meals, clean their homes, and manage those same tasks in her own household. Mammy became a figure of resilience and strength, and suddenly she was on display in our homes like so many porcelain teacups and thimbles.

So when Aunt Jemima received her well-publicized makeover in the early 90s, it might have been in response to our defiance, or it could have been a subtle effort to reassert ownership of an image that had always been about placating them. I didn't know this history when Aunt Jemima got her new hairstyle, but I did take notice of how she remained non-threatening and accommodating. No longer a Mammy, but definitely the respectable suburban carpool mom whose son Kyle is such a nice young man in his khakis and polo shirt.

Aunt Jemima, Uncles Rastas and Ben, the Land O' Lakes Indigenous woman, the Quaker Oats man, the Keebler Elves, St. Pauli's Girl, Ronald McDonald, and every other corporate image is as much the product as whatever they were created to sell. No one at Pepsico just woke up in the middle of the night, scrolled through their social media, saw this TikTok video, and suddenly decided that the time had come to retire a 130-year old icon. Because it would have been much easier to just allow it to disappear from the packaging without saying anything. I assure you, nobody misses the Tidy Bowl Man or the original Brawny Towel guy.

And before y'all get too obsessed with toppling corporate icons (RIP Mrs. Butterworth) as progressive victories in the struggle against racism, don't believe the hype. Aunt Jemima's smiling face was still selling pancakes when Indra Nooyi, one of the most successful woman in corporate America, oversaw the acquisition of Quaker Oats by Pepsico, and she was the CEO when Dan Gasby lobbied for his late wife B. Smith to replace Jemima in the advertising. That was three years ago, and it didn't happen. There are NO Black women currently heading a Fortune 500  Company, and only four Black men serving as CEOs. Anybody can be hired to sell a product (Joe Namath once sold pantyhose and Michael Jordan used to sell perms). So ditching Aunt Jemima should never have been as controversial as taking down Confederate monuments.

Yet, here we are.

And to clear up one point because I mentioned Tyler Perry's Madea and Martin Lawrence's Big Momma as examples of modern-day incarnations of Mammy, the issue is not their resemblance in physical appearance. It is with their choice to depict a Black mother figure in drag. I don't equate drag with blackface, but when it is used as a comedic device in an intentionally unflattering way because the point is to know that the character being portrayed is a man...it becomes hard not to see it as ridicule. 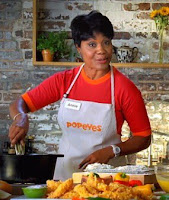 As the Quaker/Pepsico company reevaluates and tries to come up with a new brand identity, I don't expect that Aunt Jemima will become Sister Jamilah sporting an Afro or braids. I suspect that she will be retired to the museum of old brand icons where she can hang out with the original Colonel Sanders (nope, scratch that)...well, she'll be alright. Y'all just better leave the Popeye's Lady and Betty Crocker alone.