A Very Unhappy Juneteenth to You

Last Friday, June 19, 2020 was a LOT for me to process. I have a lot going on in my personal life, so while it would have been nice to have a day off, that really isn't possible when one is a stay-at-home parent in the middle of a global pandemic and has an elderly parent in the hospital*. I also had a lot of writing to finish, but I did manage to catch a Juneteenth sale...

And right after I hit confirm and realized what I had done, I saw that there were several other Juneteenth sales going on. Most of them were connected to the various Black-owned businesses that I follow on Instagram, but a few others appeared to be something along these lines --->

This came to my attention courtesy of Twitter, and what made it stand out was how the original poster thought that she was doing a good thing by making a donation from the sale proceeds to her local Black Lives Matter group. How thoughtful...

To be clear, I am rather excited about my new flip flops, and once I get my feet to looking human again, I will be glad to model them for you on Instagram. I was also happy to drop a few extra coins on a Black restaurant for Father's Day take-out and I am not at all that annoyed that my order for Father's Day gifts from a Black-owned bookstore came the day afterward (not that I will be seeing my brothers any time soon anyway.) But let's get a few things straight. Juneteenth is not Black Independence Day.

I know that we were all taught some rather problematic interpretations of American History, but this is the one time where I need you to remember that you were correctly taught that President Abraham Lincoln signed an Emancipation Proclamation in 1862, which went into effect on January 1, 1863. You might not remember the various political machinations that went on behind the scenes, because we don't teach much detail in middle school which is when most of you learned anything about slavery. Therefore, if you are still operating on what Mrs. Temple taught you during that week dedicated to the Civil War and Reconstruction, then keep reading.


You also may recall that the Emancipation Proclamation only freed certain enslaved people--those who were held in bondage in the eleven seceded Southern states that were part of the Confederacy. Texas was one of those states, and and as you know, geographically it is the southernmost state situated west of the Mississippi River. Therefore, it would take a lot of effort for Union soldiers and news to travel that far, given that most of the action took place along the eastern seaboard. Logistically, that remoteness served the needs of slaveholders who retreated to the state with their human chattel. Thus, it is worth noting that is why there was one last battle in Texas, at Palmito Ranch in May 1865, after the war had effectively ended. The following month is when General Gordon Granger issued his General Order 3 in Galveston, on June 19, 1865. 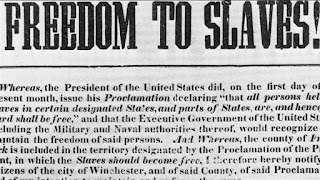 You were also taught that it was the Thirteenth Amendment that officially ended slavery in the United States. However, before we unpack that historical detail, I want to direct your attention to the movie Lincoln (2012), which offers a dramatization of the effort to ratify that amendment while simultaneously pursuing an end to the Civil War. If you are still keeping track of dates, General Lee's official surrender at Appomattox Court House took place in April 1865 (and Lincoln was shot days later). When the State of Georgia ratified the Thirteenth Amendment on December 6, 1865, it officially amended the Constitution. Another quick historical note for those of you who are keeping track--Texas ratified this amendment in 1870 while Mississippi just ratified it in 2013 (thanks in part to that film).

In the 1980s, I had a conversation with my Dad after I first heard about Juneteenth. I thought I was being clever when I questioned him, the woke revolutionary, about celebrating Juneteenth in lieu of Independence Day (which we didn't acknowledge for reasons I wrote about here). His reason for rejecting my proposal was simple: why would we celebrate the delayed notification of freedom for the enslaved people in Texas? To him, that was a 'doggone shame' not a festive occasion.

His tune changed a bit by the time DC formally recognized Emancipation Day, which officially became a holiday in 2005 thanks to his fraternity brother and my former Councilmember Vincent Orange. On April 16, 1862, the enslaved people of the District of Columbia were formally emancipated by President Lincoln eight months before he issued the Emancipation Proclamation. He also compensated the slave holders for the loss of their human property, so let's put a pin in that detail for now. Thanks to DC, the rest of the country gets a grace period in filing taxes. (You're welcome, now make us a State!)

There was a point to all of that--there is no single date that marks the transition from enslavement to emancipation. The entire push to elevate Juneteenth as a response to Black Lives Matter (BLM) protests ignores other systemic obstacles to equality. Black freedom meant very little in a world where sharecropping, tenant farming, convict leasing, Redemption violence and terror, Black codes, and grandfather clauses replaced chattel slavery. Sure, we can designate Juneteenth as a representative date for the end of the peculiar institution in this country, just as soon as we settle on 1619 as the start date...

What had once been a day of awareness and regional celebration, became #BuyBlackFriday. Perhaps that was inevitable given the economic precariousness of the last couple of months. There have been calls all month for either a boycott or a concerted Black-business buying effort (I addressed both matters here). Then there was the outcry over the initial plans for the Trumpet's comeback rally in Tulsa, which also helped (whether we want to admit that or not). To the extent that people have learned some more American History, that pleases this former professor. If our purchases helped a small business owner keep the doors open for another few weeks, I am encouraged. However, with respect to everything else I offer this modest proposal:

Please don't wish me a Happy Juneteenth. I'm not from Texas, but more importantly as a Washingtonian, I have my own issues with freedom and equality and what that means in this city which still exists as a colonial holding. That doesn't mean that I don't want people to acknowledge Juneteenth (because I do). However, I do not want to see it become Cinco de Mayo. By all means, sell your wares at a discount to move product, but please, do not conflate support of your business with the pursuit of justice and liberation if it only happens once a year.

There are plenty of calendar dates of significance that we do not commemorate with commercial exploitation. I have yet to see D-Day (June 6) sales aimed at veterans or any special discounts on gun purchases made for Constitution Day (September 17) for all of those folks who swear that the only Amendment worth knowing is the Second. Election Day, which is always the Tuesday after the first Monday of November is not even a federal holiday, so can we fix that first?

And please, learn something about the history of struggle in this country and why we don't necessarily need extra holidays, but we do need more awareness 365 days of the year. I mentioned Cinco de Mayo as example of how commercialism bastardizes these observances to the point that wishing someone a Happy whatever is enough to claim wokeness. Go on and enjoy your shots of tequilla--just acknowledge that you are drunk, not woke. The same is true as PRIDE month comes to a close and you're hoping that your rainbow accessories and appreciation for Disco make you an ally. I really am impressed how y'all overran Black bookstores with orders and by the array of Black Lives Matter merchandise you have acquired, but we are not on the same page if you turn around to call the cops on a bunch of kids who are playing football in the street.

So what would I suggest in lieu of donating to random cash app requests on Twitter (and yes, I saw many similar requests)? Read that anti-racism book you ordered, and then read a few more. Donate to an HBCU or give to one of the local organizations on the ground that are engaged in anti-racism work. When July 4th comes in a few days, spend some time thinking about the meaning of freedom and how that has been pursued by countless immigrants, women, Indigenous people, etc., and how we might work harder to become a more perfect Union. WEAR A MASK.

And please 'like' my new sandals when you see them posted on social media.

* My Mom was discharged from the hospital on Tuesday. So now you know why it took me a week to finish this...
Posted by Ayanna Damali at 4:20 PM