In Search of Our Mother's Gardens 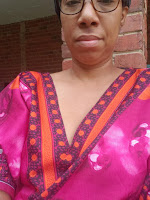 My inner Boho Busy Black Woman is quite pleased. I am sitting outside in my backyard, dressed in a flowing caftan, and surrounded by growing plants. I have a functioning compost pile where I deposit daily food scraps. What I don't compost, I am attempting to re-grow (so far an onion and some celery look promising). I found all of the pieces to my juicer and may try a new juice concoction later (nah, I'll pour a drink instead).

I don't know whose life this is, but I kinda like it.

What I mean by that is, I had an epiphany this morning as I sat outside in my backyard for my daily prayer call. I was pulling double duty, so I was up a little earlier and sat bundled in a small blanket because the air was still crisp and moist with morning dew. Right before I dialed into the first call, I took a moment to breathe in the scene--there were all kinds of birds and the white noise of my neighbor's A/C unit. At the end of the second call, I inhaled again and felt transported to some distant memory of a scene that didn't quite mesh with my usual Busy Black life. Familiar, yet strange to feel so at peace in the midst of pandemic and protest chaos.

The last time I had a summer garden was the year I got pregnant. I mentioned this on the Facebook page the other day, and I promise to tell the full story of the zucchini plant that foretold the coming of this rambunctious girl child I had the following Spring. (I checked the archives and realized I wasn't writing during that time period, so stay tuned for another post.) She is very excited, yet easily bored and disinterested in this gardening effort. Though not at all surprising, I am proud to say that she did maintain her focus long enough to help me plant some of what is now growing. 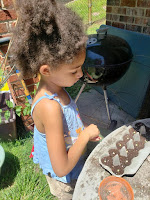 Is it a vision of my life I am channeling in these peaceful moments, or is it a memory of a scene that belonged to one of my foremothers? Is it my Grandmother Viola's tiny front-yard flower bed, full of store bought annuals that came from Eastern Market a few blocks away? I look at my unproductive and diseased peach tree and remember how the one in her ivy-covered yard, planted by the careless toss of a peach pit by my mother and her younger brother as children, flourished and yielded edible fruit for years without much effort. Or at least I was unaware that anyone affirmatively did anything intentional to keep it alive from year to year. I wonder should I dare to resuscitate mine since the squirrels and the deer probably wouldn't let the fruit ripen to maturity.

Is it my Grandmother Amanda's flowering bushes that framed the front and side yard of her little house? She had the typical assortment of what I call nice-lady bushes: azaleas, Rose of Sharon, hydrangea, roses, and probably others that I cannot remember. She and the other nice ladies bonded over their bushes, grandchildren, and the slower pace of retired life. There was also an evergreen bush that produced berries she cautioned me never to eat and a giant blue spruce that I called the Christmas tree. I remember it being a sore point when the next owner (my cousin) cut it down and planted an old rusted cab in its place. Or maybe it was Mrs. W's backyard oasis, one of Grandma's neighbors and church buddies, who had upped the ante with a fish pond (funny how I hadn't thought about any of that in years)!

Is it my MIL Martina's urban vegetable garden that had to be protected from her ball-tossing sons and their friends? The Hub recalls that she grew tomatoes and that his father had to install chicken-wire fencing to shield the plants. When I knew her, arthritis prevented her from gardening, but she still maintained various house plants outside on a deck that overlooked the street.

Is it Soror B's garden? Every year I marvel at her hot peppers, collard greens, and other garden delights, so this year I am attempting to duplicate her success in containers. I cannot wait to share pictures with her as they grow. I want to install flower beds similar to hers around my little patio and maybe plant flowers that the deer won't find appetizing. Or is it Soror M's backyard paradise, where for years, we gathered every August for new student send-offs? Like my Grandma Amanda, her house is framed by the same assortment of nice-lady bushes in the front yard and along the sides, but then the backyard transforms to an extensive outdoor mancave/she-shed. There is a grill built into what looks like a fireplace or an altar that is the focal point, along with a lounge/entertainment space decorated with potted flowers. Come to think of it, that appears to be a common pattern...

Mrs. E, Mrs. B, Mrs. M, Mrs. F all planted the same nice-lady bushes in the front of their homes, and then ceded some space for their husbands' side projects out back. Of course, that was not how it worked with my Mother. Audrey wanted nothing to do with nice-lady bushes, and my Dad was never granted a special place for any outdoor hobbies. She did have azaleas planted by the front door after she pulled up some evergreens and our basement flooded. She maintained two respectable flower beds on either side of those azaleas that are now overgrown with vinca and other assorted weeds. Since her illness, no one has tended to those beds, and while it has been something of an annoyance that I am the only person who gives it much thought, I may spend Independence Day this year digging up and planting something special for her. 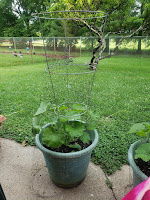 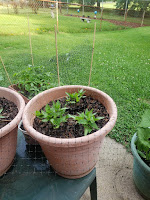 As I scrolled through my Facebook timeline after the prayer calls, I saw posts of friends with pictures from their gardens, all in various stages of development. Some were planted weeks or months ahead of mine, so they could show off first fruits. Others were planted a bit after mine, so they were excited about first buds. Some people bought already established plants while others started from seed. All of us are excited, so perhaps I might start an online group for us to share our progress. I have also wondered whether it would be worth the effort to revisit my old garden blog to track mine.

While admiring their work, I remembered the Alice Walker book and essay that gave this piece its title. It has been quite a while since I last read it, but it seems so appropriate in this moment. All of us who are planting flowers or vegetables or maintaining fruit trees, how many of us are channeling memories spent with a mother, grandmother, or aunt who tended a garden? How many of us recall how those women came home after a hard day or week of unappreciated work that never paid them what they were worth? How many of those women taught us indirectly how to create art and beauty in our own special way?

Having just written about the liberation of Mammy, my head is still in that space of recognizing how extraordinarily gifted our mothers, aunts, and grandmothers were. Those women whose hobbies we assumed were about killing time, when in fact, they were about making do with the meager resources at their disposal. Gardens were about providing vegetables to eat in-season and then to can for use in the winter months. Cooking elaborate Sunday meals were about having leftovers to sustain their hungry families on those weeknights when they had to work late. Clothing scraps were sewn into quilts and curtains and patched up holes in clothes. Sewing helped them to avoid Jim Crow humiliation in stores where they could not try on garments before purchasing. Our foremothers taught us to make the best of less than ideal situations...we just didn't know then how it would be useful to us now.

In my recollection, my mother stayed up late to sew dresses for me and clothes for herself. It had nothing to do with Jim Crow in the 80s, but she had two other children, and not many hand-me-downs from older cousins fit my lanky frame. She also sewed costumes for her students, and I still remember one night when I crept downstairs to find the entire living room swathed in velvet pantaloons for some Shakespearean festival. Rentals were not in her budget.

I remember how we had a grape vine in the backyard of our first home, and how Grandma Viola made us jars of grape jelly (and peach preserves) every year. I remember that we never had to worry about grapes going unharvested because one of our neighbors, Mr. J, enlisted a crew of relatives to pick them for us (and then spent half the winter drunk). His mother and sister were the overseers and chief vintners.

Since I haven't developed a desire to sew, my interest in gardening probably came from my Dad, who had a vegetable garden the summer we lived with him in Michigan some 40+ years ago when he was in grad school. I was younger than my daughter when I helped him harvest carrots and corn from our backyard. I don't recall that he ever attempted to duplicate that effort here in DC because I'm guessing Audrey would not have been down with it. However for years, he talked about getting a plot at the community garden nearby. He never did that, so maybe that's what I'm doing--planting my Daddy's garden (he was Amanda's only child)...

Not that it matters which parent, grandparent, family friend, etc., bequeathed this innate need to watch things grow to me. Like everyone else who finds solace in nice-lady flower bushes, koi ponds, barbecue altars, self-designed backyard patios, outdoor work spaces, vintage clothes, heirloom quilts, cookie tins full of extra buttons, rag dolls, handwritten recipes for gumbo and red beans with rice, shelves of pickled veggies, fruit preserves, secret diaries of poetry, soap or candle-making, or bathtub brew, we are all in search of peace. We are looking for beauty that we cannot conjure up on demand, places we can go to retreat from the relentlessness of chaos.


And so our mothers and grandmothers have, more often than not anonymously, handed on the creative spark, the seed of the flower they themselves never hoped to see: or like a sealed letter they could not plainly read. -- Alice Walker, In Search of Our Mother's Gardens (1972)

Posted by Ayanna Damali at 5:16 PM