Kwanzaa Is A Holiday

In elementary school, we had a very cool and hip science teacher named Ms. Tucker. Of all the things I remember about her, specifically that she was unapologetically Afrocentric in a time when that was considered passé and weird, and she taught us about Kwanzaa. I don't remember exactly what year it was, but one December she pulled out some African instruments, her Black Liberation flag, a wooden menorah, some plastic fruit, and began to tell us about the seven principles. Then she taught us this song, which I still know (because y'all know my memory for randomness):
Kwanzaa is a holiday,
Kwanzaa Kwanzaa Kwanzaa
Is an African holiday
Seven Principles, seven candles
Seven Black days for the African!
She actually danced around the room a bit as she taught us this song. We even sang it in a round, which is also a rather random recollection. I remember that when I got home, full of excitement and pride, I asked my father, Mr. Revolutionary Civil Rights rabble-rouser, if we could celebrate it since it was an African holiday. The response I got has been with me for four decades: NO.

I'm not sure that he offered much of an explanation at the time, but subsequently, he would declare that he would never celebrate Kwanzaa because of issues he had with its founder, Dr. Malauna Karenga. I was in college when he finally chose to elaborate on those issues, and to my knowledge my Dad has never willingly celebrated Kwanzaa. If he has been in the room when there have been rituals or ceremonies, I know he's been polite and respectful to nod along and smile. But that is the extent of his participation. In recent years, he has said that it is enough for him to focus on Christmas, which is a much bigger deal for him as a Catholic deacon.

As for me, I had my own reasons not to celebrate Kwanzaa. In addition to my Dad's issues with Dr. Karenga, I came across a few of my own feminist reasons to disassociate from his creation. I also didn't need the added drama of another thing to do in an already over-scheduled holiday season. I am usually traveling during this time of year to visit the Hub's Puerto Rican relatives, and it was enough to get them to add collard greens to the family dinner menu. I couldn't find a third of my Christmas ornaments this year, so the idea of keeping track of a kinara and seven candles???

For years, I acknowledged the criticisms of our siblings from the Motherland, that the celebration itself isn't African, it just uses words and images that we (Americans) perceive as African. That pan-Africanism is a buffet of choices that affirm very narrow and ahistorical narratives about an entire Continent. That we are all the descendants of Kings and Queens. That we all lived in Zamunda or Wakanda until the Europeans arrived. And I got that, because for years it felt as if celebrating Kwanzaa was a demonstration of wokeness instead of a cultural reawakening.

However, thanks to my daughter's multicultural Montessori education and my own sense of We-Are-The-World ecumenical ism, I am more open to the idea of exposing her to various holiday observances such as Kwanzaa instead of dismissing it as some made up hotep nonsense. As we know, all holidays were made up at some point, so what is the harm? She learned about Hanukkah this year and has been referring to chocolate candy wrapped in gold foil as gelt, so if she can learn about the Maccabees and believe in Santa with no confusion, then why not add a little Swahili to the mix? Am I the only person that remembers Chrismahanukwanzakah? 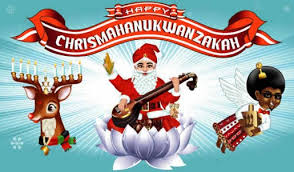 For starters, Kwanzaa isn't a Black cultural alternative to Christmas...not anymore. Kwanzaa doesn't have mascots like Rudolph or the Easter Bunny (although Kwanzaa Timmy is a classic). There are actually a LOT of Kwanzaa songs online, which I didn't know existed until I tried to find the song that Ms. Tucker had taught us. There are tons of Kwanzaa books and stuff, most of which seem to contradict the intention of a holiday that isn't supposed to embrace commercialism, but y'all know how Afroeconomics works (somebody always prints tee shirts). And yes, Malauna Karenga, the founder of Kwanzaa is problematic for both his collusion with the FBI against the Black Panther Party (Dad's reason) and his torturous and abusive sexism (my reason).

Yet, Kwanzaa has managed co-opt valuable space on the calendar. In recent years, I have noticed how Kwanzaa ushers in a season of Black Awareness wherein we get to go from celebrating our connection to the African continent to honoring one of our most revered civil rights leaders to spending an entire month teaching the world about all the ways Black people have endured and triumphed in spite of its racism. Or at least in my mind, that is how it should work. Which is why we must start by acknowledging that Kwanzaa is an American holiday, quintessentially so in that it combines numerous cultural, secular and religious elements into one (kinda like Christmas with the Baby Jesus and Frosty the Snowman inflatables in your front yard). So yes, it is somewhat random and slightly absurd, but that is also what makes it beautiful.

While I don't plan on incorporating any ceremonial rituals or dressing us in matching kente cloth pajamas, I will take time to teach my daughter the seven principles. I surprised myself in being able to name all of them from memory, but that just proves how 40 years of consistent messaging can eventually make an impression. And for the past couple of years, I have been intentional about promoting Ujamaa, cooperative work and economics through my elevation of Black businesses via the Busy Black Woman Holiday Giving Guide. In fact, it occurred to me that I have been a proponent of all seven principles through much of my advocacy and work, so why not embrace Kwanzaa? It isn't as if I don't acknowledge other holidays that are annoying or have problematic origins. Two of my least favorite holidays exist to sell greeting cards, candy, and jewelry (and I have happily accepted all three).

So no, I won't roll my eyes if you buy my Kid a Kwanzaa book. And perhaps when we're not in the middle of a pandemic, I may seek out a public celebration or two to incorporate into our holiday traditions. However, I have a few suggestions for the Kwanzaa PR folks because we need to move our people beyond just dressing the part for seven days out of the year: 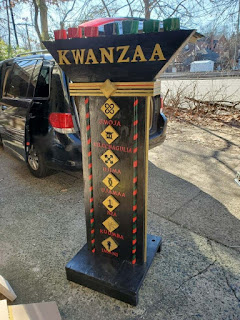