The Princess of My Heart

Eleven years ago, I took a group of young girls to see The Princess and the Frog, the first Black Disney Princess movie. I was a mentor in my sorority's junior debutante program, so we thought this would be a great outing for them. I remember my excitement in buying them little trinkets to celebrate the moment of being a princess...and how most of them were like, meh shrug okay. Then it took me a year to finally write out my thoughts about the film, which weren't even posted to this blog, but to the Cafe (which, to my surprise, y'all have discovered). So I guess it makes sense that I would eventually share some musings about that movie here, since Tiana is absolutely the animated Busy Black Woman! 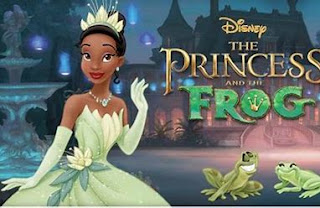 I've watched the movie many, many times since it debuted in 2009 and as I've grown older and now have a daughter of my own, I definitely have some new perspectives about the film, its historical significance, and the lessons it imparts. I still love it as much as I did when I first saw it, and if I can set an intention for this piece, it is my hope that I can describe and fully articulate the joy that so many of us felt when this movie came out! Even now, I don't think that girls growing up in a post-Tiana world really understand why this was SO ground-breaking and emotional. And now that Disney has announced plans to revisit her story, we will be watching with eagle eyes to ensure that they don't mess it up like they did The Lion King...

Speaking of, let's start with The Lion King (1994), which was clearly the animated forerunner to The Princess and the Frog. If you saw that movie when it debuted you probably have fond memories, and might remember that it was one of the most successful Disney animated films of all time. In the 1990s, Disney animation was on a hot streak with the release of a new movie each year that established its dominance. It all began with The Little Mermaid (1989), which we watched with my then-baby cousin (who is now a grown Big Cousin/Auntie herself). We loved that movie, as well as the two hits that followed, Beauty and the Beast (1991) and Aladdin (1992), so when The Lion King was released, I remember being puzzled that it was a film about animals instead of people. Hmm, I thought, surely I am not over-thinking things by wondering why after three successful films about princesses, including a very brown-skinned Princess Jasmine, we would get a film about an animal prince whose parents happened to be voiced by King Jaffe Joffer (James Earl Jones) and Queen Aoleon (Madge Sinclair) from Zamunda? 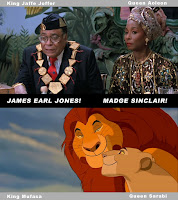 (Side note: the fact that I knew/thought this is evidence of several things, namely my age--I was 20 when The Lion King came out. Coming to America was released in 1988 and had reached cult classic status. Among my woke HBCU peers, we had time to make up conspiracies for why Disney had opted to present an animal story set in Africa. Also, I know why John Amos's character, Cleo McDowell, was flirting with the Queen...and if you don't, check the original Roots.)

Aside from those musings, we still loved the movie, even if we were perplexed about several of the voice actor choices, namely Jonathan Taylor Thomas in the speaking role of Simba instead of Jason Weaver who did the singing. That film was followed up by Pocahantas (1995), which pushed the envelope in a more radical direction with an Indigenous princess and her people pitted against a racist, greedy colonizer. That certainly was not the version of the Jamestown story we had been taught, and the film was released in the early skirmishes of the culture war we are still fighting. There were other issues as well, and though subsequent movie offerings continued to promote diverse story-telling such as Mulan (1998) and Lilo and Stitch (2002), the more successful movies throughout the next decade were the 3-D animated films produced by Pixar.

Those of us who grew up on the Disney offerings in the 70s and 80s recall so-so animated adventures such as The Black Cauldron (1985) and The Great Mouse Detective (1986); corny live action movies that starred Don Knotts; and periodic re-releases of classics from its vaults. One of the movies I saw on television was Dumbo (1941), and even though it is one of my favorites, there is no need to even discuss why that film is so problematic. I also saw Song of the South (1946) at the theater with my Mom, who must have taken us to see it without my Dad's knowledge. I don't suspect that movie will be released again, not even for sentimental reasons as references to it at the theme parks are about to be re-branded for Princess and the Frog. The point is, Disney may not have been the worst company with respect to its depictions of people of color, but yeah...the progress they made in the 90s was VERY noteworthy.

Thus, when we got to the remake of the Rodgers and Hammerstein musical Cinderella, it felt like a trial run for what audiences might expect from a Black princess story. The original musical had starred Julie Andrews in 1957, and a remake was made with Leslie Ann Warren in 1965. Forty years after the original, Whitney Houston produced a version with her protege Brandy Norwood in the title. It was a very diverse cast overall, similar to what might be typical in the theater instead of television. But it was part of the evolution that would lay the groundwork for Tiana.

Helping to pave that path was Raven-Symone, who starred in her own Disney channel sitcom for four years, and has been a mainstay in their various offerings. There were also Black animated characters, most notably The Proud Family, which not only featured Black voice actors, but was the creation of Bruce Smith, a Black animator (who would work on Princess and the Frog as well as HBO's Happily Ever After series). While I won't suggest that I was sitting in wait for a Black Princess movie, I did take note of these developments as evidence that something was coming. When it was announced that plans were underway, I held my breath, anxious but reassured that delays were necessary to avoid the mistakes that had been made with Pocahantas.

So when Princess and the Frog finally premiered in December 2009, I was psyched! I intended to see this movie at the theater, even though all of my nieces and cousins were teenagers or young adults and my niece Nasya hadn't been born yet. To ensure support for the opening weekend my sorority designated it as a red carpet affair, so I went all out in preparing an elaborate outing for our junior debutantes. I went to the party supply store to find tiaras and Mardi Gras beads for the girls, and I smiled inwardly at the prospect that a Black face would soon be incorporated into the Disney Princess franchise (for which an entire aisle of the store had been dedicated).

Despite my excitement, there was no major marketing campaign that I can recall, not even Happy Meal toys. After the movie, the girls humored me by posing for the picture below. I assumed that maybe it was their age (12-15), but then one young lady suggested that it was hard to get excited when Tiana had spent most of the movie as a frog. Subsequent reviews aligned with her observation although I defiantly insisted that it didn't matter. The fact that there was a movie centered around an empowered Black girl with her own story, even if she was human for all of 20 minutes was good enough for me. However, when Tangled (2010) and Brave (2012) debuted to much bigger fanfare, those criticisms began to make sense. Then Frozen came out in 2013, and suddenly every little girl wanted to be the elusive Ice Princess (but not her sister Anna who had a more substantial role). 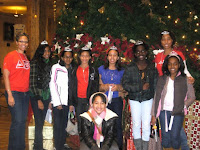 Marketing is everything. And apparently, heroines need to be presented in their fully realized heroic form in order to make an endearing impression. Little Black girls who are willing to humor their mothers and aunties by playing with those Tiana dolls and costumes all still want to be Elsa. They will be pulled into the story that ignites their fantasies and wins their affections. I wanted my daughter to like Tiana and Elena of Avalor because they look like her, then it occurred to me that my favorite Disney Princess is Mulan...

That doesn't suggest that Disney didn't get Tiana's story right, it means they can always do better. The crows in Dumbo have always been problematic, so thankfully they found a new way to tell the story without them. The only salvageable aspect of Song of the South has always been Zip-A-Doo-Dah, which still greets visitors to the theme parks. The Lion King has been successful in every incarnation because it is a timeless story. Cinderella can be remade again and again because Rodgers and Hammerstein were musical geniuses. Raven Symone is always going to have a job with Disney.

I still love the original Princess and the Frog story of hard work and self-determination, because that is the essence of Black Girl Magic. However, what is clear after all of these years is that Disney really created Tiana for all of the Black mothers and aunties who grew up without seeing our images reflected in their fairy tales. Our daughters didn't need her story as much as we did, and I suspect we care more about what life is like for Tiana and Naveen as humans than they will. It matters to us whether they are still friends with Louis, the horn-playing gator and how many husbands Lottie has had by now. We want to know how it must be as the only princess who needs to work because her husband got disinherited (come thru Meghan Markle)! And now that Splash Mountain will be re-themed as a bayou (so Brer Rabbit and Brer Fox can still linger in the set pieces), I can't wait to check out a Tiana's Place New Orleans-themed restaurant in Downtown Disney.