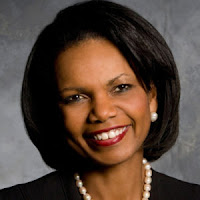 It is a painful revelation to acknowledge that someone you once admired is terrible. In fact, it really sucks. A few weeks ago, I had to confront the realization that a lot of what has been said over the years about former Secretary of State Condoleezza Rice was right. I won't call her any of the names that some of y'all have used to describe her over the years, but let's just say that after her appearance on The View, I see things so much clearer.

For years I have been mis-hearing the subtle reassurances and denouncements in her account of her personal narrative. While I heard her speak of overcoming the racism and prejudice of 1960s Alabama to accomplish remarkable feats, in fact she was demurring that the system was ever implicitly racist or sexist. The difference is more than semantic. You see, she did the work of overcoming her race and gender to be regarded as acceptable enough to advance inside a system where Black women typically aren't concert pianists that speak fluent Russian. And she did all of that without raising her voice or rolling her neck. How admirable.

So when she appeared on The View and made the case for why little white children don't deserve to have their feelings hurt in the hard discussions of American history, it was consistent with her special brand of suburban Mom diplomacy. What would the neighbors think if we traumatized their children with horrific stories about the sins of their grandparents? No, no, we mustn't do that...

For years, I admired and defended this woman, in spite of her politics and her devotion to the neo-Cold War worldview espoused by the Bush Administration. In my mind, it was more important to focus on the fact of her achievements, not the compromises she made along the way. Even when she was shoe shopping while Black people were drowning in the aftermath of Hurricane Katrina, I argued that her portfolio as Secretary of State did not address domestic policy. Therefore, her presence would merely serve to distract from the incompetence of the Administration's response. In her book, Rice conceded that her trip to New York was ill-timed, the kind of regret one expresses after just missing the end of season sale. 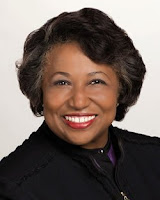 I thought I had said my peace on Dr. Rice a few weeks ago when I posted my initial reaction to her comments on the Facebook page. However, this week a former colleague of mine posted this thread to Twitter about former Ambassador Carol Moseley Braun. On November 3, 1992 she became the first Black woman elected to the U.S. Senate from Illinois. The thread covered various factoids and anecdotes of her career, and it reminded me how those had been the very attributes that had inspired my class to request her as our commencement speaker in 1994.

I recall that we were beyond excited and were expecting a rousing speech full of marching orders! That previous summer had been when she argued so passionately against a routine Congressional trademark renewal for the Daughters of the Confederacy. I was primed for her to offer more insight into what compelled her to shame her colleagues into to denying those "delightful gentleladies" the "imprimatur" of the U.S. Senate. I wanted to know exactly what shade of red former Sen. Jesse Helms (R-NC) turned in that elevator when she stared him down and told him that his singing of Dixie could never make her cry. I was ready!

Instead, we got some insipid Flag Day keynote address to the local VFW. Disappointed doesn't begin to describe how we felt. All of these years later, that is what my classmates remember (or try to forgot)--that she came all the way to Atlanta to lecture an audience full of Black women and their families on patriotism. Someone on her staff clearly misunderstood the assignment.

Wisdom, the passage of time, and current events would suggest that the Ambassador came to our graduation with a different agenda than to deliver a typical "win one for the Gipper" commencement address. We knew what we wanted to hear from her, but in hindsight it was a four-hour long graduation ceremony with several speakers. There were others on the dais that salvaged the moment and offered the more memorable and meaningful remarks. Whether she knew that in advance or just made up her mind at the last minute once she had sat through at least two hours of pomp and tediousness is anyone's guess. I just know that most of my classmates don't recall with any detail much of what she said, not even the fact that she gave a soporific speech on patriotism. I can't imagine she expected us to reflect on her theme, so methinks she used our graduation as an opportunity to send a message to a broader, national audience of folks who didn't seem to understand what has now become the gospel truth.

Black people, particularly Black women, don't need to be lectured on patriotism. But apparently white people do. If you disagree, then just consider the fact that white people would rather overthrow this democracy than see certain women and people of color ascend to positions of power in our government.

Of course, no one foresaw that possibility in 1994, but then again, no one foresaw the impact of integrating the Senate with one single Black woman. They didn't expect for her to cause any trouble since none of the other nice ladies had been so bold as to challenge their traditions. It was supposed to be a routine vote, but she threatened to hold the floor until hell froze over--and she had every right to do so under Senate rules. After all, hadn't some of those same Senators tried to filibuster the Civil Rights Act almost thirty years prior?

One day I hope to inquire about this directly, but perhaps Braun felt the need to explain to those white southern gentleladies and their defenders why their support of a symbol of insurrection was so objectionable. She knew that her invitation to the Daughters of the Confederacy annual Margaret Mitchell Tea Party had been permanently revoked, so she used the platform of Spelman's graduation to show them what real patriotism looks like. This wasn't the soaring oratory the great-great granddaughters of women who had once been enslaved and forbidden an education were expecting; instead it was a message to the descendants of Miss Mellie and 'nem on what it means to be an American.

And I declare that whether we realize it or not, that is exactly what Black women have been doing all along. We've always understood our assignment. We keep saving this republic from the clutches of these "innocent" gentleladies who would rather debate white children's self-esteem than support the actual lives of Black and Latinx children. At every decisive turn, we show up to vote against tyranny and injustice. We advocate for the needs of our communities after having worked a full shift for less pay, fewer benefits, and for longer hours. Our blood, sweat, and tears run red, white, and blue; yet y'all keep insisting that their reverence for a Lost Cause is somehow more patriotic.

You know how exasperating it is when someone can't or won't do what is expected of them? We often sigh facetiously, you had one job...but in reality, it isn't just one job. It is always the 'other duties as assigned' part that makes the difference. For Black and Latinx women in visible positions of power, part of the job is to inspire our children to believe that they can accomplish anything when given the opportunity to shine. And another part of the job is to burn the place down as necessary. We can't transform racist and sexist structures if we allow them to remain intact. Therefore when I juxtapose my frustration with the Ambassador in 1994 to the profound disenchantment I've come to feel about the Secretary, it becomes so clear why I have been wrong all of these years. One woman understood the assignment.

In all the years Condoleezza Rice has been on the national stage, I have never witnessed her flub a line or stray off-script. She recites every word with A+ perfection, even when she recounts her childhood in Birmingham. Never a quiver in her voice or a tear shed for the violent death of a playmate or whatever indignities segregation forced her to endure. She's not bitter; she's better than those who took to the streets to demand justice because she stayed in the library to get her homework done and didn't cause trouble. She made it to the halls of power and didn't touch anything, not even the furniture. The only fires she's lit have been the candles in the candelabra atop her grand piano.

Carol Moseley Braun may not have set the Georgia Dome ablaze at my graduation, but I bet there are still some smoldering embers in the U.S. Senate. In fact, those nice gentleladies are still burned that her words on the Senate floor have reverberated across the country and their flag no longer flies. She made them so big mad that they have led the charge to ban curriculum that isn't taught to prevent the sins of their parents and grandparents from being revealed. In spite of the backlash, Braun declared that one doesn't become the first Black woman elected to the Senate to make nice with the good ole boys. 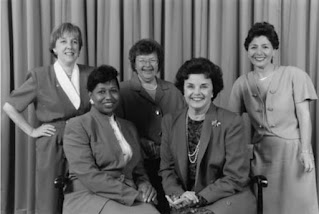 "My duty is to stand up for something and to be a spokesperson for the outrage and disappointment and those who wanted to see change in the Senate."

Someone understood her assignment, and it was not the star pupil who never let her race or gender distract or offend those in power. Putting up with sexism isn't the key to unlocking the corner office. Racism isn't some fairy tale that happened once upon a time, long ago in a land far, far away. And patriotism isn't misquoting MLK so that white children can feel better about enjoying their skin color privileges guilt-free. We can disagree about a lot of things, but we cannot disprove the existence of systemic -isms by pointing to our historic positions within exclusive spaces as progress. Until there is more than one face in the crowd, paved roads for others to follow--unless there are fundamental changes to standard operating procedure, then there is NO progress.

Let me close by invoking and tweaking the words of another famous women who made history during the first week in November back in 1968. Shirley Chisholm understood that the assignment was not to demand a seat at the table in order to pour tea. If you did the work of bringing your own chair, you'd be wise to have brought along some matches as well.