OK, one small detail will change in a few days.  Instead of a chunky URL hosted by Blogspot, Busy Black Woman will be moving to:


http://www.busyblackwoman.com
They (the omnipotent auto-message generating IT folks at Google) tell me that the change will be complete in a few days and that all of my content will migrate to the new address.  Keep your fingers crossed since I will not otherwise know how to access anything written before the change finally occurs.

And speaking of empire building Busy Black Women...as you know, our patron saint, The Oprah, will be shutting down her TV talk show this Wednesday after 25 years on the air.  Can I tell you that I am old enough to remember when Oprah was a news anchor in Baltimore?  For real, and I am not making this up--at one point, she rocked an afro (sho nuff)!  Anyhoo, the next thing I remember was that she disappeared from our airwaves and reappeared on the pages of Jet magazine in countless articles about her new Chicago-based daytime talk show.  This was significant because (a) the only national talk show of significance was hosted by Phil Donahue and (b) locally, Carol Randolph's show was almost off the air at this point (yup, I am that old, and in case you have never heard of her, you need to click that link to learn more). 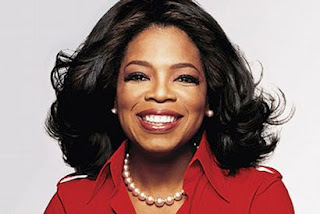 In the 25 years since the Oprah took over the 4pm slot, well, what can I say?  She has succeeded where others (Napoleon, Alexander the Great, Julius Caesar, etc.) have failed in taking over the world.  I have written before about how the Oprah is the most powerful woman on the planet (Condi Rice and Laura Bush were numbers 2 and 3 respectively), and I still stand by that pronouncement, even in the age of Hillary Clinton and Michelle Obama.  I might admire Queen Elizabeth II for having her face on a lot of currency and her own national anthem, but I actually know the Oprah.  We all know the Oprah (wouldn't be surprised if QEII secretly DVRs our girl as well).

The Oprah is the original BFF.  Our ace boon coon.  The Big Sister Almighty.  The real-life fairy godmother with real magical powers.  She finally got you to tell the truth, read a book, and go to the doctor.  She led you out of that bad marriage.  She coaxed you out of the closet.  She encouraged you to start that business.  She sent your child to college on a scholarship of spare change collected from strangers.  She cried with you when you revealed that deep dark pain.  She declared you a legend when others didn't even know your name.  She revealed the secret, and got you to believe in angels again.