Anyway, at 4:00pm, I tuned in to watch a composed, calm, serene and humble Oprah Winfrey take to her stage to preach a farewell sermon of sorts to her congregants in the studio and around the world.  And her message was simple: find your life's purpose and then fulfill it as God intended!

I know that to all of the Oprah-haters (and yes, there are apparently as many haters as there are die-hard Oprah-holics out there), this is consistent with her do-good and be-blessed New Age spiritualism, but in her 45 minute benediction, she found a way to mention the universe, Newton's third law of motion, and Jesus without making anyone feel alienated or excluded.  The love she expressed for the millions of people who have watched her show over the years exuded from her like a warm, golden light.


And immediately after the show ended, I googled the poem "If" by Douglas Malloch*, since the last line "be the best of whatever you are" was the theme of her message.  I memorized this poem in elementary school, and over the years I have heard various allusions to it, most notably in a sermon by Martin Luther King, Jr.  And being a prolific internet researcher, I googled that sermon, "Creating the Abundant Life", and let me say that what I read there proves that the haters are indeed wrong.

Putting on my adjunct assistant professor hat for a few seconds, the aforementioned sermon was preached at the Dexter Avenue Baptist Church in September 1954.  For those who remember your American history, this was a whole year and a few months before King became the spokesperson for the Montgomery Bus Boycott.  King was 25 years old, and at the time, one could assume that he thought his purpose was just to be a Baptist preacher.

Oh, the places life will take you when you give in to your purpose!  Twenty-eight years ago when Oprah Winfrey moved to Chicago, she was simply looking for another job.  Now, I am neither a preacher nor a talk show host, but someone needs to shout on that point...

Maybe I just needed to hear that message today...to remember that poem I learned some 30 years ago...and to discover that coincidences are really divine intervention.  There have been times in my career when I resented being relegated to the minor leagues of my profession, but I showed up and took my swings anyway.  And a few doors were opened.  Right now, I have no idea where the path I'm on is headed, but I know that if I stop walking, I will never know. 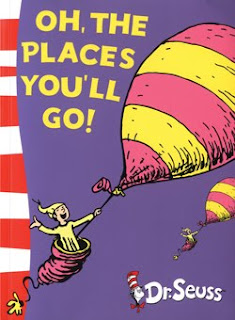 "We all dream of great deeds and high positions, away from the pettiness and humdrum of ordinary life. Yet success is not occupying a lofty place or doing conspicuous work; it is being the best that is in you. Rattling around in too big a job is worse than filling a small one to overflowing. Dream, aspire by all means; but do not ruin the life you must lead by dreaming pipe dreams of the one you would like to lead. Make the most of what you have and are. Perhaps your trivial, immediate task is your one sure way of proving your mettle. Do the thing near at hand, and great things will come to your hand to be done."

Be the Best of Whatever You Are

We can't all be captains, we've got to be crew,
There's something for all of us here,
There's big work to do, and there's lesser to do,
And the task you must do is the near.

If you can't be a highway then just be a trail,
If you can't be the sun be a star;
It isn't by size that you win or you fail —
Be the best of whatever you are!
Posted by Ayanna Damali at 10:25 PM