This is too easy.  Who didn't love Soul Train?  Who among you is crazy enough to admit to such want and deprivation?

To be honest, I am not even sure that Soul Train qualifies as being described as fried chicken-worthy because there is no good reason for anyone to feel guilty about loving this show.  I mean, do you know anybody who did not want to be a Soul Train dancer?  Have you ever met a person who has never participated in a Soul Train dance line?  Did you know that Soul Train is such an integral part of Americana that they are going to preserve parts of the original set in the Smithsonian?  And is there a person alive who does not instinctly know that a blown kiss, two fingers, and a raised fist universally means love, peace and soul? 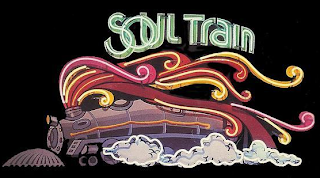 No my friends, I feel no guilt for loving the Train; my crime is watching Soul Train clips on YouTube.  Over and over and over again.  I can lose an entire afternoon of work productivity to old Soul Train clips.  Heck, one of these days, I might blow off an entire Saturday morning of meeting obligations if there is a marathon on Centric...  That is how serious my love is for the Train--as serious as a Sunday soul food feast of fried chicken, mac and cheese, buttermilk biscuits, collard greens, and grape soda in a jelly jar!

So without further delay, here are some of my all-time favorite Soul Train clips:


Al Green: I don't know where to begin with this one...first of all, his arm is broken but instead of securing it in a sling, it is barely in a cast and definitely wrapped in some chick's head scarf!  Then, let's not forget that he was on SOUL TRAIN, so the dancers are clearly confused about whether they should be dancing or swaying...or shouting!  And finally, the dude in the hood in the band *no words*


Jackson 5: Back when MJ still looked like he was related to his brothers, they performed on the Train and he did the robot.  This is one of those moments in TV history that hinted at his future brilliance as a performer.


Kim Fields: Umm, well because no one except for me remembers that this EVER happened!  I think most people seem to recall that her character Tootie on The Facts of Life was once in love with Jermaine Jackson...but no, it was in the midst of Michaelmania that she declared her love and released this ridiculous single.


Elton John: This legendary performance proves that white artists did go on Soul Train and it was not at all strange (ok maybe this one was a bit odd).


Pebbles: ROTFLMBO!!!  What is great about this clip is how so wrong her performance was from the rose pom-poms all over her outfit to the need for a back-up dancer on a show where all she had to do was lip-sync!

And there is so much more that I could post, like the Scamble Board contestants and how that was such a bogus set-up because they always seemed to guess the famous name in just the knick of time.  Although everyone tends to think of the 70s when it comes to classic Soul Train lines with the perfectly-choreographed-to-last-exactly-20-seconds routines, the 80s color-coordinated super partners had to hold their own and dance solo down the line.  Memorable is just one word I could use to describe the dude who consistently break-danced in a Yoda or ET costume.  And of course, who could forget Cheryl Song, better known as the Asian lady with all of that hair?  And please do not get me started on the Fashion Fair Cosmetics and Ultra/Afro Sheen Hair Care commericals, or worse, those Schlitz/Colt 45 malt liquor ads with Billy Dee Williams!

And then there was the Alpha and Omega of TV show hosts: Don Cornelius.  He's so cool, he gets his own paragraph.

Whew, there are so many more clips and memories, but what would you expect from a show that I watched faithfully every Saturday at either 11am, 12 noon or 5pm for at least 25+ of its 35 years in syndication?  I've got the itis just thinking back on all of that...
Posted by Ayanna Damali at 8:11 PM