(Well, it was back on October 5 when I started writing this initially...but please read on :)

Ten years ago, on the night of October 4, I was wide awake and worried about coming down with a cold.  It had taken us six hours to get to New York and then another hour or so to find our way to White Plains because apparently clearly marked exit signs only exist on the New Jersey Parkway.  Anyway, after finally settling in for the night, I called my parents and my father assured me that he would get in touch with my younger brother who was away in college to let him know what was going to happen the next day.

The next day was a beautiful autumn Friday in New York City, and my then-boyfriend of five years and I rode down to Manhattan with a couple of friends from college to get hitched at City Hall.  Of course, nothing went as planned.  We left late and got stuck in midday traffic.  The ceremony was taking place three weeks after 9/11/01 just a few blocks away from what had become known as Ground Zero and workers were still searching through the rubble.  Police were everywhere, so we had to go through several security checks just to drive close enough to be let off near the clerk's office.  Not all of our friends were there at the right time, and we almost forfeited our slot because the office closed earlier than we anticipated.  To this day, I am positive that the ceremony was conducted almost entirely in Spanglish.  Later I learned that my father had casually told my brother that I had gotten married two days after the fact.  And both of us went back to work that Monday morning as if nothing major had happened at all.


Of course, it was major.  We were married and three weeks later, he moved into my apartment and thus began the first challenge of married life.  We spend the bulk of that first year house-hunting, which had been the impetus for the hasty nuptials in the first place.  We closed on our house three weeks before the blessing ceremony that was insisted upon by our parents and families, exactly a year and a week after the City Hall wedding.  During the two weeks prior to that second ceremony, the city was being terrorized by the DC Sniper.  Right after Thanksgiving that year, I learned that I would be losing my job--the very same job that I had assured the mortgage lender in August that I knew of no reason why I would not be there for the foreseeable future.

And that was just the beginning.

Looking back over these ten years, I can honestly tell you that sometimes it has been hell--heartache and pain, health crises, job losses, financial setbacks, personal disappointments, depression, and the long-running dispute about who is the sloppiest member of our household.

But we are still here.  And most of the time, we have continued to laugh and love and endure.

Two days ago (October 3), the Obamas celebrated their 19th wedding anniversary, and having been married for nine years and two days longer than us, I am sure that they could offer a much more detailed list of challenges faced and obstacles overcome and laughter shared.  For starters, he is the freaking President of the United States and her mother lives with them...

Two days from now (October 7), a very special young woman will be getting married and I will do my very best not to be photographed wearing the ugly cry face when she walks down the aisle.  This young lady was the first among the husband's nieces and nephews to refer to me as "Titi", and when I told her that she could just call me by my first name (which she had been doing), she insisted that I was her aunt now and that thereafter, I would be forever her Tia.  It is so hard to believe that as I think back on her high school and college graduations, this time Saturday she will be a married woman. [sniff, sniff]

I've given marriage advice in this space previously, and while most of it still applies, I need to add one more very important nugget for all of you soon-to-be or just-married folk out there: remember to laugh.  Laugh at yourself, laugh at your mate, and laugh at all of the folks who are not in on the joke.  Laughter may not be the cure to every problem, but it is the best medicine.  Laugh at all of the corny jokes that you will hear over and over and over (and over) again.  Learn when to laugh during the repeats of stories that you know are being retold slightly differently than what really happened.  Laugh when your child's diaper is on backwards or when their clothes do not fit or match.  Laugh when she tells you that she will begin to cook dinner again.  Laugh when his idea of cooking dinner is microwaving a pizza.  Laugh when the credit card bill comes and the item that you were told was purchased on sale actually cost more than a flat screen TV.  Laugh when he tells you that he wants to run for President and that but that you can still keep things as normal as possible for your family.  Stop to laugh before you hurl that lamp across the room after you are accused of being a nag even though it is only the fifth time you mentioned that a particular task is still undone.

Laugh just because there are too many things that will make you cry, make you angry, and make you wonder why you ever got married in the first place.  Laugh because in the instant that you second-guess your marriage, you will remember in the very next instance why this was a good decision. 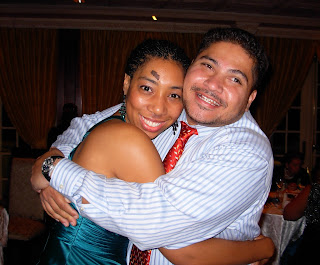 Posted by Ayanna Damali at 3:45 PM