If I were to sum up my impression of motherhood these last few weeks in two words, they would be tub poopie. Or I could go with no nap. Or if you prefer something more general then it would be MOM DOWN.

In this latest episode of Busy Bad Mommy, the Babe developed a high fever out of nowhere last Monday so she and I spent the entire day curled up in bed. I nursed her, gave her juice, tried several times to give her Tylenol, and even took her outside for fresh air. My Aunt and Dad checked in periodically with advice, but by 9 o'clock when the Hub got home from work, her fever had not broken. Around the same time I received a call from a cousin who asked me the most obvious question...which I could not answer because (head smack) I never took the Babe's temperature!!! So in my frantic attempt not to look like a complete moron, everything went haywire and we ended going to the ER. This is me at 3am right before we were released: 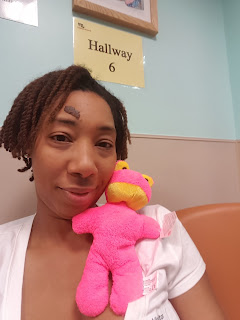 Diagnosis: too much wax in her ear.

The next night at bedtime she began screaming for no good reason after she had been asleep for about an hour. Her father came in and declared that he had it under control but she continued to shriek as if she was on fire. So I loaded her into the car for a ride around the neighborhood, which worked for about 5 minutes until we got back to the house. She went to sleep eventually (probably after my Xanax kicked in).

I recently saw a documentary on the Kennedy family and of course there was the always-smiling Ethel Kennedy with her 11 children. And I wondered aloud, how in the hell? I know they had nannies and servants and other kinds of help, but I struggle to manage one tiny little kid.

Mind you, I used to be great with children. My cousins can attest to that. My Niece has generally been easy to manage. The NY contingent of nieces and nephews love me. Even the new Baby Niece and I get along quite well. But with my own child I am out of my league.

For obvious reasons there is no asking my mother for advice. But even if she could offer me some motherly wisdom, she would not. She would ridicule my inability to do basic things like prevent the kid from eating cheerios off the floor. She would declare how superior she was as a mother, call me a silly girl, click her ruby heels, and take off on her flying broomstick. In her place is her sister, my Aunt, who also flies in on her broom to occasionally chime in on my ineffectiveness.

There are no other close family members to offer me much advice or support. My Dad was away in graduate school during my early childhood, so apparently his memories of me began around the time I hit puberty. On the Hub's side, all of the nieces and nephews are grown (and his mother was around to assist). He has several friends and coworkers with young children, but I do not.

So, if I wanted advice, I would have to turn to the village council of senior mother figures. And based on my past experiences with a few of them, I would rather just clean up tub poopie. Remember how the pediatrician looked at me like I had six heads when I said yes, the Babe still nurses at nine months (now 16) and no, she is not in daycare? The play group nannies brag about successfully sleep training their charges at birth, while I wrestle with the Babe to take one nap. The library nannies, who always arrive early for story-time to secure the best spots at the front of the room, look upon me with annoyance whenever the Babe wanders too close to their well-behaved charges. And the FB mommies who work several jobs, have successful side hustles, and pursue advanced degrees, while I am a SAHM with a blog no one reads? Yep, lots of support there.

I do have good Mommy moments (I do, I do, I do, I do). After all, I was clever enough to buy her shoes with squeakers and she is reasonably well-behaved in restaurants. Perhaps we should spend a lot more time at the mall.

I know this time will pass quickly and one day I will look up and she will be a teenager. And then if I'm lucky, she'll call me on the phone one day with questions about her own toddler (and thanks to this blog, I will not be able to lie).
Posted by Ayanna Damali at 3:48 PM