At times the 2016 Election cycle has felt like an episode of Looney Tunes. On the one hand there is Yosemite Sam and his running mate, Elmer Fudd and on the other hand there is...well I have to be honest, I do not remember the name of the girl bunny who was not a major character until the 90s which seems a tad condescending, so here is cartoon Hill from the Presidents Song (she appears at 2:58). But I hope you get my point. This is the craziest election I have witnessed in my lifetime.

And while this election will indeed be historic, it is also quite sad that in order to elect a woman her opponent has to be someone so ludicrous that the best compliment is to compare him to a cartoon character. But I am jumping way ahead of myself by declaring a winner...

Several of my friends on social media are practically obsessed with proving Yosemite's unfitness for office, almost to the extent of waging a religious crusade. And I agree, he is totally ridiculous which is why I refuse to even say his name anymore. Apparently he thrives on seeing his name in print, even if he is being criticized, which then results in his saying even more outrageous things to keep his name in print. 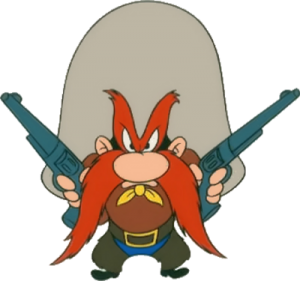 So, my first point of order: STOP. The articles, the analysis, the editorials, the tweets, the quotes, etc. We get it. We're already convinced...

And this is my second point: However, the folks who do not regard him as unfit are no longer your friends, remember? So many of you have announced on several occasions intentions to de-friend all the folks with differing viewpoints, and I trust you made good on that promise. Thus, everyone who gets your posts already agrees with you and his fans DO NOT CARE.

My third point: In de-friending your former classmates, colleagues and crazy uncles, you are now operating in an echo chamber similar to what fuels FOX News, MSNBC, AM radio and those random internet sites that keep conspiracies alive. No alternative points of view, no room for debate, just a steady diet of the same perspective for breakfast, lunch and dinner. But hey, if that's what you like.

Point four: Therefore, we are all clear that you have a definite opinion about this Presidential election, so it would actually be more useful to post articles, analysis, editorials and tweets about the candidates down ballot whose races are just as important. For example, who is running for Attorney General, Congress, or for your local county/city council? These people will have a more direct impact on your life. Use your social media outreach to urge your friends and followers to pay attention to those contests in order to make more informed decisions.

Point five: Actually get involved in the process by doing something constructive. Get the young folks in your family registered to vote. Offer to take seniors to the polls during early voting, if that is available to you. Volunteer to work on a campaign (or donate money to one). Become a nonpartisan election monitor or work as an election day official. It is great to tell folks to vote and how, but even better to demonstrate your commitment to the process by participating in some tangible way.

Six: Stay involved after November 8! The election is just the beginning of the process. Pay attention to what the elected officials are doing and demand accountability from them if their decisions are contrary to your interests. The great thing about social media and other forms of electronic communication is that you can immediately express your positions just as easily as you can waste time watching cat videos.

Seven: Have friends who would rather vote for some random third party candidate? Let them do whatever works for them and accept that not everyone is invested in supporting our current political system. A vote for a third party candidate is a statement and contrary to what you might want to believe about the 2000 election, the result was not just the election of George W. Bush. That election exposed serious flaws in the way politics influenced how, when and whether each vote really counts. So instead of blaming those 500+ Naderites for giving us W, you should be thanking them.

Eight: OK, seriously, maybe thanking the Naderites is a stretch, but in politics, winning is not everything. Neither is losing the final word. Live to fight another day, and remember that the struggle continues.

My penultimate (ninth) point is directed at those who were disappointed and got Berned: Really think through whether petulance is the appropriate response to losing this round. Your candidate made a choice at the very beginning to participate in the system when he had been an outsider for decades. In the end, and in spite of the back-door shenanigans of a certain Debbie with the curly hair, he accepted the will of the people and decided to back Hill. He gave an impassioned speech that urged you to keep the momentum going, so now, do you play or take your ball and go home?

And I need to make a larger historical point to those who refer to you as whiny millennials, those who were once thought of as whiny flower children--y'all understand disillusionment (remember 1968) so please do us a favor and guide, not chide.

The final point: Yosemite might be unfit and there are some definite issues with Hill, but as my husband so eloquently posted on Facebook this week, we are electing a President, not the Pope. Neither is perfect. This is America, not Utopia so let's do this!
Posted by Ayanna Damali at 12:57 PM

Email ThisBlogThis!Share to TwitterShare to FacebookShare to Pinterest
Labels: causes