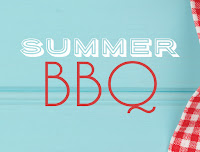 I used to have these special posts on random topics that I would post on a specific day of the week, but it has been so long that I forgot the rules! But who needs a reason to resurrect an old forgotten label for the sake of shaking things up a little? Besides, it is Memorial Day weekend, so I thought to perform the very important public service of providing a few guidelines to clarify expectations for those who might not know the appropriate summer BBQ etiquette. Here goes:

1. Know your audience: There are different standards at play depending on the host(s) of the event...so let's just get this out of the way up front so that there is no confusion--white folks operate on slightly different rules. Don't get offended if you are reading this and are thinking, "Wow, that is an unwarranted generalization, possibly racist", because it isn't. White folks host summer parties where there might be some grill action, some pool action, and probably some business/networking; whereas black/brown people host cookouts for any random, arbitrary reason. I could write an entire post about the differences, but I will distill everything to these three (3) main points: 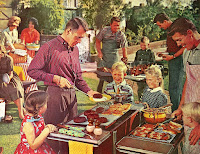 2. Politics: Before January 2017, the rule was that you could only talk politics at the BBQ with that one conspiratorial uncle who sits in the same chair all day and still doubts that the moon landing occurred. He probably doesn't vote, but somehow has a theory on everything from international climate agreements to trash collection in the hood. He criticized Obama from jump and also predicted that Hillary Clinton was going to run for President back in 1994 (and that she would lose).

But the shock of this last election finds him disillusioned to the point where you dare not say anything, even as he hints at his need to unload. The election of Montana Max has him so upset that he now defends Obama, Hillary, George W. and even Ronald Reagan, which is why you need to listen politely and have your escape plan ready to execute after about 15 minutes.

3. Special Dietary Issues: Eat before you come. While there will be plenty of food options available, just know in advance that if you are vegetarian, vegan, gluten-free, have food allergies, etc., you are probably out of luck. Everything will have come into contact with meat, dairy, or whatever triggers your allergies at some point, so don't even ask. In fact, you should assume that unless you are at the white folks' party, the only safe thing to eat is the green salad with no dressing and the chips.

4. Attire: This is a matter of extreme importance, because you will always be judged by that really unfortunate outfit you wore to the BBQ, so play it safe. Maxi dresses with cute accessories are standard for the ladies; cargo shorts and polo shirts work for the guys. If you are not a maxi dress person, then wear your cropped pants and a nice tunic. But do not show up in the mini-dress that only slightly covers your behind, brand new high-heeled sandals, team apparel, or any kind of romper. And don't just throw on a tee shirt and shorts unless you are at the white folks' party for your kickball team. Because somebody's grandma is at the BBQ and not only will she notice, but she will say something directly to you if you are dressed inappropriately. You've been warned.

5. Handle your liquor: This goes without saying because the black/brown folks will clown you, the white folks will judge you, and getting drunk is an irredeemable faux pas.

6. Control your thirst: This is one of those rules that is best explained with a scenario, and though this will be offered via the male heterosexual perspective, it is applicable to any situation.

You come to the BBQ with your friends, but not with a significant other. You spot an attractive woman and decide to approach her. You make small talk, and she politely declines to encourage your advances. Smarting from her rejection, you violate Rule #5, which might have been forgiven until you end up in the pool. And the person who saves you is a Steve Urkel/Clark Kent-looking dude who used to be a lifeguard (and who happens to be the only person at the black/brown folks party who can swim).

Here is what you did not know: that attractive woman came with Urkel/Kent, he overheard your small talk, watched you get drunk, and actually nudged you into the pool (at the brown folks' cookout, she is actually 15 and it was her little brother who pushed you). So you never know who is at the BBQ and how one false move can ruin your rep...

7. Watch your children: This is not a given. Some of y'all go to the BBQ and let your children run wild while you are off somewhere drinking, playing spades, or talking to that conspiratorial uncle from Rule #2. And you do this because you already know that everybody is watching out for every child in attendance, so no big deal right? Wrong.

You know your kids are crazy. That they won't wash their hands but will want to touch everything on the table. That they will piss in the pool. That they will break that lawn chair. That someone will suffer an injury that requires stitches. That somebody will end up drinking beer. That Grandma is watching and will drag your terrible parenting after you leave. That folks will hesitate to invite you back...

8. Store-bought food is acceptable: Unless you are the host of the event, most times you need only come to the festivities. But black/brown folks believe in the pot luck, which is not just BYOB but also bring a side. We've already established certain rules for family holiday gatherings, so this is an exception of sorts because it is the only time you can bring something store-bought without judgment. There are various personalities assembled at the BBQ, including those folks who don't eat other people's cooking (I know); which is why there are at least four different containers of potato salad on the buffet. And the hosts are cool as long as you know that you're taking it home.

9. Universal applicability: All of these rules apply at the family reunion, the company outing, and the church picnic.

10. Fix your own plate: Can we settle this drama without a social media debate? Because I would hate to see relationships fail, brothers go hungry, or the BBQ come to an abrupt and awkward end over a damn plate!

Let's deconstruct this issue by starting with the premise that it is a polite and kind gesture to have someone fix your plate. It is only a necessity when children are involved. Every other able-bodied person can serve themselves without a whole lot of drama, so please do not make a federal case if your wife/girlfriend/side-chick/date does not bring you a plate of food. It really isn't that serious.

Yet, I know that for some folks this is a major test of their relationship status. Some folks have argued that this is why there are so many single black women, while others claim it is the reason why they are still married after 30+ years. Whatever.

So can we settle on a rule that if you are hungry and are not younger than 12, you can get yourself something to eat. If you are in the midst of a deep political conversation with that uncle from Rule #2, this is your escape plan! If you are that attractive woman who is being hit on by the thirsty dude from Rule #6, this is your polite face-saving rejection of his advances. If you are at the white folks' party, trust that NO BODY will even notice who puts those chips and veggies on that small plate. And even if grandma notices from the kitchen and says something later, you can always say, "well, I was hungry" and that will shut it down.

And again for emphasis, it is a courtesy for someone to fix your plate, bring you a drink, or even gather up your trash--not a duty. Your only duty at the BBQ is to heed these rules and have a little fun this summer.

Posted by Ayanna Damali at 5:04 AM