The Day I Almost Lost It

Edited repost from the Cafe:

Can we start with the fact that I have some kind of terrible cold, the first one that has actually slowed me down since I gave birth to the Toddlersaurus? So I was in no mood for two-year old drama, yet that is apparently all she had on the menu today.

So I almost lost it when I dragged that child outside with her stupid rain boots barely on her feet to let her scream on the front porch for about five minutes. This was after she spent the morning climbing all over me, not eating her lunch, refusing to nap, dumping all of the clothes out of her drawers, scattering her jewelry, biting me (twice), and generally getting on my very last fucking nerve. If I had yielded to temptation and shut the front door in her face, then I think you could declare me lost. Luckily, one of my curious neighbors happened to walk up to check on things...

My bff called right around the time I let the kid back in, and when I told her that I sent the Hub to work because it wouldn't have made that much of a difference having him here catering to her instead of me, she offered to come rescue the kid tomorrow after work. That was not exactly a firm offer.

When I first wrote this piece in frustration that I could not catch a break, it was also while I was wallowing in my self-pity pool of failure. Having been a perfectionist for a while, I know its pitfalls. I could be exaggerating, but in all likelihood, I'm grading myself on a curve. Barely passing is only the difference of a few points.

Because the fact that she is not even interested in the potty, is just starting to speak jibberish, still addicted to the pacifier, cannot go down for a nap on her own except when she's in her car seat, and it is a month before she is supposed to start at camp...yeah, I might not be hard enough on myself. And that village that I should be able to rely on feels deserted.

And on top of all that, I am writing yet another piece on motherhood and THIS IS NOT SUPPOSED TO BE MOMMY BLOG! And because I have no idea how to import a Kermit gif to illustrate my frustration at this moment, I guess this will have to suffice: 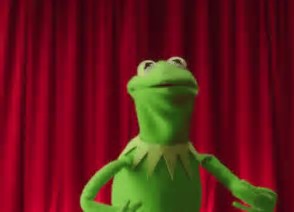