This is the type of story that would normally have been relegated to a micro-mention on the Busy Black Woman Facebook page, but I felt compelled to go in, for a just a brief moment on the ridiculousness of this entire incident. And also for posterity, in case someone else gets the bright idea to try something stupid like this again. It also gives me the unique opportunity to bring back, once again for your reading pleasure, Fried Chicken Wednesdays (something too good not to eat, even though it ain't no good for you)!

Yeah, I'm talking about that group of young tourists who inadvertently stumbled onto the campus of Howard University and caused all kinds of crazy because they were wearing their pro-Trump gear. The week after Charlottesville when he made a total ass of himself, y'all choose to dig in and brand yourselves as similarly stupid??? OK. 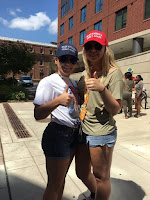 Let me start by arguing for the sake of argument, that visitors to public places do have the right to be clueless that their apparel might be offensive to others IF they are truly naive enough not to know that their apparel is offensive. Meaning, if these young ladies had visited the campus of a different HBCU, not located in the heart of a Milk Chocolate City, like say West Virginia State University, then there would be no story to run and tell. Because somebody could genuinely make the mistake of not knowing that WVSU is an HBCU. I assure you, if I show up wearing a Black Lives Matter tee to the wrong place, like a Chik-fil-A somewhere in rural Arkansas, I know that I should thank my lucky rabbit's foot, every ancestor, Holy Mary Mother of God, and Black Jesus from Good Times that I made it out alive.

So, that was your first mistake. Y'all come to visit Washington DC and think that just because you bought your pro-Trump shirt from some Asian guy peddling a bunch of cheap shit off the back of a truck parked near the White House, that you somehow wouldn't offend anyone by wearing it. This is WASHINGTON DC! Even the President has better sense than to wear that red hat around here. And not because this is still a city full of black folks, but because this is a city where no one voted for him and we ALL hate him. And believe that we aren't exactly fond of his supporters either.

Mistake number 2 was going to visit a college campus at the beginning of the new semester without knowing anything about said campus. Nobody sane does that. You don't roll up to the gates of Harvard and not know that you are not at Boston University. Because you aren't, and everybody on Harvard's campus will be quick to let you know that you are an idiot. Because you are.

Mistake number 3 was not immediately recognizing your first two mistakes and neither (a) removing the offending gear; (b) removing yourselves from the situation immediately; or (c) doing both a and b. You got the reaction that you did because you intended to cause drama. Mind you, we totally get how some folks get off on proving "reverse racism" by black people.

Mistake number 4 has been your assumption that you would elicit sympathy from anyone other than the folks from conservative media outlets. You went on social media and admitted that you wanted to flaunt your support of the President, which you apparently feel entitled to do, because "this is America". And you are right, this is America where we have a right to free speech, but no right to a free audience. You don't go to someone's house and insist that you have the right to offend them because "this is America".

So here is where I serve the cold chicken: Trump supporters are just as annoying as he is. You all seem to think that the world owes you something, like our eternal, global antipathy for unleashing his special brand of wanton ignorance isn't sufficient enough. Wearing that MAGA gear is the same as taking a tree limb and beating a dead horse. And then dragging the pulverized carcass through the streets. And then scraping up whatever is left and trying to serve it to us on garbage can lids.

No thank you, we pass. So please do not defend your audacity as patriotism nor our offense in response as racism. Trust that we hate black Trump supporters even more (just ask Omarosa). You won an election, not a war, so we'll be doing this all over again in a few months.

And here is some even colder chicken with the frost crystals still visible: we refuse to play the role of the vanquished, defeated foe to your conquering hero, the Troll King. So get over it. You don't get to play the victim because no one is the least bit impressed by your victory dance (the German, Canadian, Australian, and the Mexican judges aren't even looking in your direction). And because you must instinctively know that you are on the wrong side of history, no one is going to cut you any slack for being young, especially since that is precisely the root of your problem. You want us to see the Dance of the Hapless Maidens, but we keep seeing Whine of the Clueless Cheerleaders:

And here is your last, frost-bitten, processed nugget that we can't even call chicken: you are too young to have any appreciation for when America was allegedly greater, and you were too young to have voted in the last election. So really, who cares what you think until you can do something to make it count? But those Howard students you tried to goad, a few of them were eligible to vote in the last election. You are still in high school, so more of them will come of age by the midterms. They actually have the means to do exactly what is printed on your hat in just a few months. And believe that they will.
Posted by Ayanna Damali at 8:34 AM