The last thing I ever want to do is defend the actions of anyone connected to the disaster that is the current Administration, but I think we are about to cross that bridge too far from fairness that leads right into the heart of Pettyland. These shoes are not a reason to hate Melania Trump: 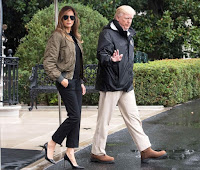 In the midst of a natural disaster that finds the fourth largest American city under 50+ inches of water, I know we want to find someone to blame. Folks want to blame it on the gays or lesbians being elected to positions of power. Folks want to blame Obama, even though he isn't the President anymore, so then they want to contrast his response to Hurricane Katrina (even though he wasn't the President then either). And then they want to blame his wife for going shoe shopping during the storm (but that was Condoleezza Rice), and so we all get that some folks still just want to be mad at Obama for something.

Instead, let's dispense with our hatred for rich women who find themselves embroiled in controversy for being rich in the middle of national catastrophes. It isn't their fault.

Now, a rich woman throwing a tantrum about not receiving special treatment and then getting a poor minimum wage-earning salesperson fired--that is a reason to get upset. Because in that instance, she was being an entitled bitch (and yes, that even applies to our patron saint, The Oprah).

But this rich woman, married to a top Administration official whose name we can't spell, posting a picture of herself on Instagram wearing thousands of dollars worth of name-brand clothing that she isn't getting paid for advertising? Clearly, she thinks we care like her name is Kim Kardashian, so no use in wasting energy getting mad at her.

Sometimes, we just need to cut the rich woman who visits the site of a major catastrophe and isn't quite dressed for the occasion some slack because she probably does not have a royal hazmat suit in her official wardrobe:

And let's be real...criticizing this rich woman for anything is likely to get you cut from Big Mama's will:

Yet, some folks' inability to vote for this rich woman: 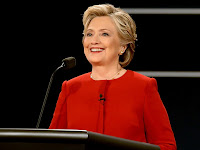 Is the reason why this guy is Commander in Chief: 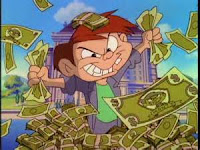 So at the next natural disaster, which will hit in the next 3-5 years because Him don't believe that climate change is real, give this rich woman and her smiling rich husband a break if they don't invite you in to stain their recently installed carpet because your place got flooded:

They've got to keep the place nice and clean for Jesus.
Posted by Ayanna Damali at 10:55 PM