*This is a long, personal venting post. But please read anyway.*

Last Sunday a familiar scene unfolded at the playground: my daughter was playing and some kid tried to get her to relinquish some object so that s/he could play. And each time I am caught in a dilemma--do I tell the kid to scram or do I teach my daughter to play nice?

The short answer is that it depends on the circumstances. In some cases when my daughter takes a toy from another child, I intervene to encourage her to either return the item or to share. In other cases when toys are taken from my daughter, I might let her retrieve the toy or I redirect her to another item. I do this because it is my nature to avoid conflict, and based on my observations of playground behavior by not just the other children, but also the parents. Let me share a few scenarios to better illustrate my point:

I used to think that I was being over-sensitive until the Hub witnessed the third scenario, and this past weekend when my Niece witnessed scenario first. And before you pose a series of obvious questions, let me interject with a quick story about how my daughter's front tooth got chipped at a public splash area. She was playing with another girl who was about a year older, and who was there with her mother and older brothers. Somehow, this kid ends up swinging a plastic racket and pops my kid in the mouth...

Thus, after the trauma of that splash park experience, I determined that certain play spaces were "safer" for my daughter. My definition of safe is to have her play in places where there is less of a likelihood that she will be physically harmed because: (a) it is a contained playground; (b) where I can see everyone; and (c) that has plenty of adult supervision per child. We have not ventured back to a public splash park yet for primarily those reasons. However, I wonder if I should just be less risk averse instead of nursing my feelings after each one of these micro-aggressive experiences.

* Which is where we return to the story of what happened last Sunday. The three of us (Toddlersaurus, Niece and I) had just had an early dinner and gotten gelato, and I had promised to take them to the playground before we were to head home for the evening. We got to the playground around 7:30pm, just as the sun was starting to go down, so they had only 30 minutes of play. I sat down on a bench and took out my phone to check my social media and to take pictures of them. There were three children playing outside of the gate, but inside the play area it was just my daughter and my niece, so they had all of the discarded toys and stationary equipment to themselves. After about 15 minutes, the other children who had been playing outside the gate ran into the playground, and the boy with the group jumped on one end of the see saw. My daughter then climbed on the other end, and this kid then starts to protest that he wanted to play with his other friends and that my daughter should move. Instinctively, my niece walks over and plants herself between them while this kid continues to whine. He is then joined by the two girls who also protest that they want to play, but not with my girls.

And then this kid, all of five years old, turns to me and demands that I tell my girls to relinquish the see saw so that he and his friends can play.

Half a second before he began his tirade, my inclination was to tell my daughter that she could play on something else, but when my niece walked over to sit with my daughter something told me to let this all unfold. So after all that woofing at them, when little man turned to address me like I was his nanny, I told him that they should all share and went back to scrolling on my phone. He and his friends gave up and continued to audibly complain about our selfishness. Soon enough, my girls abandoned the see saw, and the trio of whiners returned with their parents to play for less than one minute before leaving the playground!

What the serious FUCK??? Mind you, at least one of those adults must have been within earshot to have overheard this scene because the entire group of parents, children and pets surrounded the see saw as soon as my girls got off. So really, were y'all trying to intimidate or protect? When is it ever appropriate for a child to address an adult in that manner? And then, literally for less than a minute, they couldn't all play on the damn see saw together?

On the way home, I was livid and cursed just about the incident just as you read above (and worse). But on other occasions, when one of other scenarios occurs, I think I'm being a good parent when I encourage my daughter to yield or share. But if no one else makes a similar overture in favor of my child, what does that say? Am I reading too much into the indifference of some parents whose inclination is to look the other way when their children are being unkind or even hostile? What am I teaching her in these moments?

I concluded this week that one big constant in all of this is the fact that I am often by myself with my daughter in these situations, which in turn means she is merely playing by herself at the playground. I don't know how children at this age make friends, and since I suck at making friends at 43, I am at a serious loss in encouraging her especially as her language skills are still developing. There are no parents in our weekly playgroup, just nannies, and I am not a part of any real parent groups, just virtual ones on Facebook. She may have made friends at summer camp, but I didn't make any parent friends with whom I can arrange play dates. I've tried to connect with line sisters, alumnae sisters, and others who have children her age, but I haven't had much success since every one else has a day job.

This could become an entire piece about all of my parenting anxieties and insecurities. I am not my mother, who probably would have had words for that little boy and his parents. Her ability to manage these types of situations was to take no prisoners, a quality that often embarrassed me, but one that I sometimes wish I could emulate. And I am not my niece, who at seven, can be the big sister and guide my daughter through the maze of playground interactions with others. When the Niece was two, I watched her organize children on the playground into little armies of minions who did her bidding. So my daughter has me, the kumbaya mommy who doesn't want to believe that here in DC in 2017, I have to tread lightly to avoid confrontations with all these unfriendly, cliquish white parents.

It is the same bullshit I alluded to two years ago when that chick emailed to say I couldn't join their mommy group because I live in the wrong quadrant of the city. It is the same judgmental mean mommy stare I get at the library because my daughter is taller than every other kid (like me) and so she comes across as a bully instead of just another temperamental toddler. It is that refusal to make eye contact when I sit down next to you on the park bench, so you quickly whip out your phone to avoid talking to me. It is the I-don't-know-where-I-recognize-you-from-but-I-won't-bother-to-speak-anyway effort not to acknowledge me. It is the sure, you can sit there while we totally ignore you and your daughter.

All of this could be explained as just rude behavior, but because I grew up in this city and am well acquainted with certain attitudes, and let's just say that even when I have concerns about other kids, it is never because they are blatantly trying to exclude my child. The girl who popped my daughter in the mouth was older and definitely playing way too aggressively, but they were playing together. And yes, she was black. On the day that the Hub witnessed two little white girls tell our daughter that they did not want her to play with them on the sliding board, it was a little Latino boy who came over and took our daughter's hand and led her up the slide. The African and Latino nannies do speak to me, but the white SAHM speak to each other first and then act like they don't see me.

I've pretty much expressed all of my frustration, but with no resolution. I could decide to take my daughter to other playgrounds in the area to see if we encounter the same nonsense. I could take her to the playgrounds where I have been wary of her safety, and hover like a helicopter to keep her from getting hurt by some older kid. I could adopt my niece, but that five year age difference is going to become an issue sooner than we realize. Or I can do as I have always done when subjected to the same drama when I was growing up--confront it head on. My issues might not become my daughter's issues, and the only way to know otherwise is to continue to act like we are just as entitled to play as the other children. I'll keep you posted. 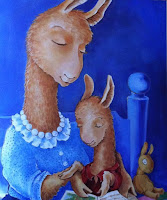 Posted by Ayanna Damali at 4:34 PM