What Dreams May Come

After dropping the Kid off at school yesterday, I came home and opened my computer to the headline that would ruin the rest of my day. It was premature, so after posting a retraction on my both the Busy Black Woman and my personal Facebook page, the day unfolded like we were all on death watch. Which we were until the sad confirmation came by the evening that director John Singleton had died.

I was in college when Singleton's debut film Boyz 'n the Hood was released. I didn't see it in the theaters, but on tape that someone had rented or bootlegged (look, don't judge the college student hustle). I didn't love the movie at first and was annoyed that at the end when we learn that Trey and Brandi were headed to college, the name of my alma mater was misspelled. Additionally, I was annoyed at the marginal depictions of the women in the film as either dysfunctional single mothers or hoodrats. (Mind you, I was a young college feminist, so complaining about sexism and misogyny was how I rolled back then, fueled by that Images of Women in the Media class that I keep referencing.) 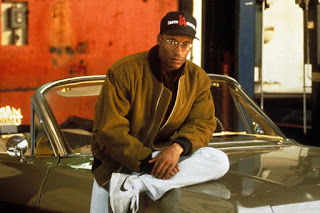 I didn't see the genius that everyone else saw in his work back then. It would take me years to recognize it, and then more time to fully appreciate what Singleton's career and body of work meant. Thankfully, that recognition and appreciation occurred well before yesterday; thus with respect, I won't attempt to write a retrospective of his life and work. The obituary writers and film critics will handle that. Instead, I wish to acknowledge the totality of his accomplishments in what I hope will be the ultimate tribute--to urge you to live your dreams!

John Singleton was a few years older than me, so his youth was the primary thing that I remember the most about the buzz of his early career. He was the youngest and the first Black director to receive an Academy Award nomination for Best Director, and in hindsight, I can only imagine the pressure he should have felt from the weight of such expectations. Yet, it didn't appear that he allowed that to phase him. After his auspicious debut, he went back to work and kept working. Along the way, whether his films were successful or not, he paved an important path that one can only hope will become well worn by many others one day.

He brought Hollywood to the hood. He brought under-the-radar young Black talent to the silver screen. He told stories that challenged the politics of respectability without apology or sentimentality. He gave us strong Black heroes. His early success probably inspired peers like George Tillman, Jr. and Reggie Rock Bythewood, and later young brothers like Ryan Coogler and Barry Jenkins.

Yesterday, the initial news of his impending death shook me in the most unexpected way. I didn't know John Singleton personally. But similar to my reaction at the news of Luke Perry's untimely death from a massive stroke just weeks ago, I suddenly became aware of my own mortality.

Lately, I have been muscling my way through a fog of depression that has me questioning everything. Am I a good person? Am I contributing anything significant to the world? Are my dreams too lofty? What am I afraid of? In small but significant ways, I have been receiving reassurances...not that I am guaranteed of anything substantial, but that it is the journey that makes the struggle worth the effort. So in spite of my doubts, I keep pressing.

If it is the epitome of self-involvement to reduce the sad fact of someone else's death to an anecdote for personal reassurance, stay with me here--John Singleton's death offers all of us a lesson in living. How many of us remember the hype about him back in 1991? Are you on a path towards living your dreams? Did you write that screenplay? Did you start that business? Have you traveled the world? Are you working a job that pays the bills but kills your soul? Do you wake up everyday with the desire to conquer the world? Or do you drag yourself out of bed to face the monotony of the same old shit day in and day out? Are you too comfortable with just existing? What are you afraid of?

This morning I heard that John Singleton told Spike Lee to look out for him in a couple of years. Marinate on that for a minute, because Singleton was just a year out of film school when Boyz was released. Have you ever dared to be so bold as to tell a mentor that you are planning to be a threat? For that and more, I have so much respect for what this brother accomplished in that 25+ year span of a career (a lifetime by Hollywood standards). The fact that I would not call myself a great fan just speaks to how impressive and inspiring he was. He had a dream and lived it.

Singleton never garnered the same level of acclaim that he received at the start of his career. His big screen output was uneven, and I'm guessing that his recent work on the small screen was an effort to remain relevant in an industry where he was no longer a wunderkind. So what. Nobody ever said that living your dreams would be a walk in the park on a perennially sunny day.

Yet, as tributes pour in and folks take the time to assess his career, I am looking to everyone who is still in Hollywood to take what Singleton did to the next level. The aforementioned peers and young brothers whom I am sure he inspired have either won or are on the path to win Academy Awards and now there are Black women in that pipeline to do the same. I saw this tweet thread last night about how Singleton celebrated Regina King and Peter Ramsey at the 2019 Academy Awards, then this article about his impact on the careers of so many others.

Hence, the next level is where you refuse to confine your dreams to the outline that has been drafted by someone else. Use it, expand on it, make it your own, and then watch what happens. One of my criticisms of John Singleton's work had been its marginalization of women. Even now, I feel that is a fair critique; yet, I also recognize that writing fully realized women might not have been on his level. Instead, his work introduced us to the actors whose interpretations of his narrow female characters allowed them to grow into better roles. Regina King was a former child sitcom actress whose career might have followed a different trajectory had it not been for her memorable performance as one of the hoodrats I found so grating in Boyz. And somewhere, there is a woman who can write and/or direct those fully fleshed out Black women whose stories also deserve to be told on screen.

We mourn the end of this life and what could have been which is what we do when someone dies too young. We also celebrate all that he accomplished and the foundation upon which others can build from the work he left undone. And of course, there are those dreams that we still have time to chase...
Posted by Ayanna Damali at 6:38 PM