The Lovers, The Dreamers, and Me

Last week I made the utterly insane declaration that I was going to take the Kid to see The Muppet Movie for its 40th Anniversary limited release in theaters. And then I promised to share the tale of our adventures, so here I am to made good on that along with sharing a bit about my nostalgia for the muppets. 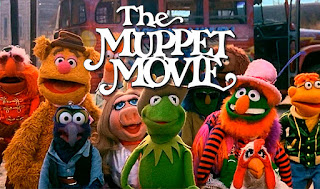 It was just last month when I wrote this piece about Sesame Street's 50th Anniversary. A few days afterwards, I began to see advertisements on Facebook for the 40th Anniversary of The Muppet Movie, which made me suspicious about those algorithms, but also curious if it would be worth the trouble to see this at the theater with the Kid. And until late last Thursday morning, I had determined that given our past experiences (Hidden Figures, Coco, Moana, Ferdinand, Despicable Me, Misty Copeland in Swan Lake, etc.), it would be great in theory, but not worth the effort.

Mind you, I just passed on a formal outing to see the new CGI version of The Lion King for all of the above-referenced reasons (to which I will add Toy Story 4). Because in spite of her ability to sit quietly with a hand-held device for at least 30 minutes without so much as a peep, THIS KID CANNOT SIT STILL IN FRONT OF A LARGE SCREEN. And nobody has good money to waste on popcorn when half of it will end up on the floor. Nor can I afford to rent an empty theater for her to run around in for an hour in the dark.

But Thursday morning, two friends posted this article. And the next thing I know, I was recalling the words to this song and then I went looking for YouTube videos to post on the FB page and then I started searching for the closest theater with the best showtime and then hours later I'm on this improbable, hapless mission to drive across the Wilson Bridge in rush hour traffic by 4pm. Just as improbable and hapless as it was for an unlikely bunch of Muppets to travel across country to achieve Hollywood stardom.

As I shared in my Facebook post, this movie is peak nostalgia for me. And as I heard in the voices of the commentators who were discussing it the next day on Morning Edition, it has that same effect on all of us Gen X-ers who have seen this movie at least a dozen times (and its various sequels, and the original show, and Labyrinth, and Fraggle Rock, and the Muppet Babies).

Maybe I shouldn't try to speak for everyone in my generation, but there is something very emotional about seeing Kermit the Frog on that log with that banjo singing a song that many of us probably sang for some elementary school assembly (kinda like this clip from the Queen Latifah Show). There is the sweet nostalgia of looking back on that era of our youth--the innocence of a time when we could be entertained by the corniest of premises.

So yes, I got a little dust in my eye when those first familiar chords were strummed. I looked over at my sleeping Kid and had a full circle memory of being at the theater with my mother to see this movie (again for the umpteenth time) with my younger brothers. Now I'm the mother with the high strung little person who had to be taken out of the theater to diffuse a 20 minute meltdown in the bathroom...(and maybe I'll share the entire story at another time), but thankfully, we returned to enjoy the rest of the film without incident.

I tried to imagine how our parents reacted to all of that ribald adult humor and how so much of it went above our little heads. How Henson and Co. were clearly fans of Mel Brooks' Young Frankenstein and Blazing Saddles and how significantly this Muppet film must have influenced the Coen Brothers' O Brother Where Art Thou. How normal it was for us to accept that there was barely a handful of female muppets (all of whom were voiced by male puppeteers except for Fran Brill over at Sesame Street); yet, the diversity on display in that menagerie of characters would eventually inspire the likes of Kevin Clash (Elmo) and Leslie Carrara-Rudolph (Abby Cadabby). And let's not forget to mention Avenue Q...

Back to the myriad reasons for our sentimentality--I was five when this movie was released and I can't name a single memorable Disney movie from the 70s. The 80s was a slightly more creative decade for the Mouse, but all in all, big screen kid's fare consisted of superheroes, George Lucas, and Steven Spielberg blockbusters. And that was one of the inside jokes of watching the Muppets and SS during that time, because their parodies for younger audiences featuring real-life stars in comedic spoofs of their work was a wink at our parents. Who can forget Pigs in Space? And why else would we have tuned in to see Lynda Carter, Christopher Reeve, or Sylvester Stallone sing?

Ultimately, I realize that my own nostalgia for the Muppets has been the combination of this year marking a series of transitional personal milestones and the need for some form of escapism. Nostalgia during tumultuous times is like eating comfort food in the winter. Each of my recent trips back down memory lane has been akin to wearing my favorite pajamas, hugging my favorite stuffed toy, and eating my Grandmother's Sunday cooking. Which of course evokes the bittersweet acknowledgement of time and loss...because the longer we live, the more we have to look back on.

Hence that lump in the throat that develops whenever we hear Jim Henson as Kermit the Frog. To a lesser extent, we know that most of the other familiar voices have moved on (died or retired), and everything must change. In addition to Jim Henson, who created our beloved Kermit, many of the actors who had cameos in that movie are gone. Some of those classic muppet characters didn't return for subsequent incarnations of the show. Some of the people from that era in our lives may be gone or perhaps we're taking care of them. Our lives are busy, hectic, chaotic, and preoccupied; yet there is something so calming and special about that moment when an unassuming felt puppet frog tells us that we too can chase our dreams.

Posted by Ayanna Damali at 9:47 AM