When I first heard the news, I immediately thought about my Mother and how if she was lucid and able to articulate, she would write a more fitting tribute to Toni Morrison. That is because my Mother was one of Morrison's biggest fans--she read all of her books, taught several of them as well, celebrated her birthday in the same month, etc., while I can admit to having latched onto my Mother's appreciation. Like many of the Black women writers who came into my life in my youth, I loved Toni Morrison because my Mother loved her first. 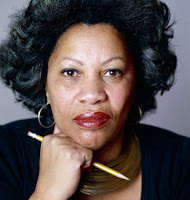 So as I pondered the type of tribute that my Mother would have written, I decided to visit her. My Dad and I discussed Morrison's transition, but he said that he hadn't told her yet...because to him, my Mom is still very much aware of the world. The Alzheimer's has only made her mechanical existence a challenge, so I went along with his reasoning. Instead of sharing the sad news, I told her how I would download some of Morrison's audio books for us to enjoy together on my next visit. And she smiled.

Then as usual, life intervened, but before the great calamity of technical difficulties and shitty customer service, I had an epiphany via a text message exchange with one of my line sisters. I just learned that she is also a writer, so it seemed rather out of the blue that she would reach out to praise Morrison's well-known accomplishments. I responded with my wish that we could have had the chance to sit at Sister Toni's knee just to inhale her wisdom...but then it occurred to me that is why she wrote and became so celebrated--so that we all could receive her gifts.

I did not formally meet Toni Morrison in the flesh, but in hindsight, it would be inaccurate to say that I never sat at her knee. I heard her speak at Spelman College more than 25 years ago. It was right after she had been awarded the Nobel Prize. She came to Sisters Chapel for a reading that was open to the public, so the gathering was standing room only. Somehow, I managed to find a seat while she stood at the podium and read from Beloved and Jazz (just published). Afterwards, she offered some thoughts on reading and memory and history. I recall being childishly underwhelmed...

That story of my youthful foolishness could be another reason to cede this task to my Mother, who clearly would have had a different, more appreciative recollection. And that is entirely the point--I can't ghostwrite a tribute from my Mother's perspective on her favorite author. I must write from my own collection of experiences and encounters with Morrison's work. I must admit that I never could get through more than half of Beloved, despite several attempts. I must admit that I have only read a few of her books; yet the impact of those was profound. I must admit that I had been hoping to see the film about her life in the present tense before...because I had some sense that this moment was imminent.

My initial encounter with Toni Morrison came in high school. My Mother was teaching The Bluest Eye to her high school students and had accumulated a collection of her other works. I picked up Sula because of the cover art and inhaled that book twice. Then by chance, it was part of our summer reading list for Spelman, so I read it again. Then as we discussed it in our Freshman Composition class, I read it for a fourth time. Because of Sula, I met one of my best friends forever. Because of Sula, I earned a nickname that allowed me to finally appreciate the birthmark above my right eyebrow.

I re-read Sula every so often because it is a profound statement of womanism--the Black woman's assertion of her worth, her value, and of her free, defiant, and unrepentant self. The book was published the year I was born, in a time when society was beginning to debate the roles that were prescribed for women overall, so I am sure that it caused quite the scandal. I imagine that many good church ladies saw themselves in Nel, as many of us continue to do so now. I was always drawn to Sula, so I re-read this book to remind myself that whenever in doubt, I just need to live. And in my mind, Toni Morrison was a real-life avatar of the character she created.

I also read The Bluest Eye, Tar Baby, Song of Solomon, several of her essays and editorials, and her collaborations with her late son Slade on children's books. But whenever I heard Toni Morrison speak, it was as Sula. I especially enjoyed her interviews with unsuspecting journalists who assumed that she should be honored by their attention. She wasn't--why would Sula be flattered by adoration? In hindsight, I understand now why Morrison seemed so unbothered, including the harsh critical reception of the movie version of Beloved. If we didn't get it, that was our fault for expecting it to be easy to read, easy to watch, easy to process...

Easy to assume that a Black woman with (or without) a Nobel Prize somehow needed permission to be free. To be Chloe Wofford. Toni Morrison. Mother. Sister. Elder. Audrey's favorite writer.

By reading her work, we all had the opportunity to meet her. If you have a favorite from her magnificent opus, you had the privilege to sit at her knee. If you have yet to make her acquaintance, lucky you--prepare yourself for a sumptuous feast, prepared lovingly like a Sunday spread.
Posted by Ayanna Damali at 10:53 PM