That Special Place in Hell

Madeline Albright famously said "There is a special place in hell for women who don't help other women," and Lord, I hope she's right. I have a list of recommendations for a few special ladies who deserve first-class accommodations in their expensive handbags...

1. Let's start with Tomi Lahren, who recently had to apologize for a particularly vulgar tweet aimed at Sen. Kamala Harris. It was so offensive that even her colleagues at FOX took issue with it, which is probably why she eventually apologized. Because really, of all the glass houses from which to throw stones...

2. Every single woman who still stans for R. Kelly.

3. If the world needed a nastier British version of Ann Coulter, there is Katie Hopkins. She is mean, and that is the most respectful thing I can say about her without insulting her looks or using an expletive. She gets regularly re-tweeted by our DESPOTUS, which means she is as deplorable as he is, but with an accent which might make it appear that she's a tad more polished, but racism and xenophobia coming from the gutter or from some lonely woman's parlor is still bile. And her obsession with hating on the Duchess of Sussex reads a lot like she once fancied herself as a contender for Prince Harry's affections (as if).

4. I have several Facebook friends who support her candidacy, but Rep. Tulsi Gabbard is absolutely on the midnight train to crazy town. And that is not my salty opinion in the wake of her debate night attack on Sen. Kamala Harris (because all's fair and politics ain't beanbag). However, it is my humble opinion that Gabbard is playing a very cynical game by going after Harris--the only other woman of color in the race. Take note of the fact that none of the other women have taken similar swipes at each other.

5. Every self-righteous pearl-clutching Christian lady who expresses an opinion on the DESPOTUS's strong faith and values. Yeah, I'm thinking specifically of statements made by former Rep. Michelle Bachmann, but she's not alone as there are clearly churches full of the faithful who agree with her. Believe whatever you need to in order to justify your misguided support for him, but be reminded that this is a man who endorsed a pedophile, has been accused of sexual assault by at least 12 women, and who bragged about grabbing women by the crotch. By biblical, do you mean the plague of evil he has unleashed in the world that has us needing the patience of Job to endure it?

6. Those sisters who proudly support and promote hotepian pontificating on social media. Like one sister I know who is on a self-appointed mission to convince Black women that our choices about everything are solely responsible for the deterioration of society. Or Yvette Carnell, who co-founded the American Descendants Of Slaves (ADOS) Movement which is another name for hotep with a hashtag. Of course, there are times when someone might inadvertently share hotepian booshay like a computer virus, such as those instances when someone posts what they think is a harmless meme of some dude sitting in a wicker chair with a barefoot woman standing next to him. If your Pavlovian response is to 'like' any picture that mentions the words queen and real man without taking note of the context, just know that is the same as buying raw shea butter from Walmart...

7. Mean mommies. We already know that abusive and neglectful parents deserve a one way ticket down under, but this special section is reserved for the mean moms who judge everyone else for their parental shortcomings. The women who would never forget the sunscreen or who always bring healthy snacks. The women who troll social media to shame other mothers. And if you don't immediately have an image in your mind of a woman who fits that description, you might need to look in the mirror...#ijs

8. The woman whose personal life impacts the environment of the entire office. And I'm not talking about Miranda Priestly at Runway (because her personal life was the office), I'm talking about that passive aggressive supervisor who makes everybody miserable, even her boss. As she sees it, part of her job is to micromanage everything, so she makes everyone clock in and out and has something to say if anyone lingers too long past a designated coffee break or lunch hour. If she doesn't have children, she brings her dog(s) to the office, but has an attitude whenever someone's child spends more than 20 minutes there. If she does have children, then their schedules dictate your access to her, so she's at work sending emails as soon as she clocks in at 7:30am, but refuses to respond to anything work-related after 4:30pm. You feel compelled to buy wrapping paper, popcorn, and Girl Scout cookies from her but she will call the cops on the kids selling water at the train station. And she is best friends with the woman in HR so there is no point in filing any complaints. 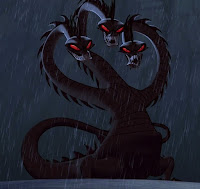 9. The Three Sirens of the Trumpocalypse: Lady Ivanka, Melania Antoinette, and because she is new to this blog and hasn't been properly introduced, the Lovely Lara, wife of Eric the Spare, the Duchess of Cork (since her husband runs the family winery). It seems rather fitting that if you listen to any of their lies long enough, you're headed for certain death...kinda the way our country appears to be heading. We already know that Ivanka only cares about her image, Melania doesn't care about anything, but what Lara cares about is dooming us to another four years of this madness. Which makes her the most dangerous head on the Hydra (yeah, I'm interchanging Greek metaphors all over the place).

10. Again, the Lovely Lara, Duchess of Cork, because for all of her hard work behind the scenes, she has earned her own paragraph. Of course there are plenty of other women who support the re-election of the DESPOTUS and they each have reserved seats (Ronna Romney McDaniel, Sarah Huckabee Sanders, and everyone else mentioned in this article). But isn't it a little strange that the Duchess, a relative newcomer, has surpassed the other ladies-in-waiting? I just watched The King's Speech recently, so I can't help but to wonder if we are witnessing some kind of abdication now that Junior is more interested in romancing his new spokesmodel.

You know what, who cares about whatever Game of Thrones shenanigans they have going on because the point is that on some level, we need to look out for each other! I'm not saying that women have to agree on every issue, but there are a few matters where our interests in the common good should overlap. Like at the very least, we should all want clean air and water. 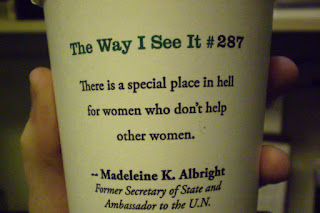 Posted by Ayanna Damali at 1:52 PM