Several years ago I took a mediation class, and at some point a woman in the class said something or asked a question that sparked some controversy. Folks were heated and upset, and when she tried to dig herself out of the mess, it only made things more muddled. So the instructor paused and sought to allow everyone in the room a safe space to address what the woman had said in an effort to diffuse the tension of the moment. Three people offered perspectives on the incident that I remember: my own (which was not to offer an opinion for the sake of expediency); the person at the center of the drama (who offered what she perceived was an apology); and another woman whose response was, in today's vernacular, GTFOHWTBS!

Allow me to take a step back to offer a little more context--the women who made the offensive gaffe was white and the woman who responded in ALL CAPS was Black. Those details are significant because whatever the first woman said, it triggered all of the racial alarm bells and whistles that many Black people recognize from an early age. And I shall never forget how this lone Black woman, in a class where she was not a minority, felt compelled to call bullshit on what she felt was the familiar manipulative maneuver of deflection. She was insulted that we had taken class time to resolve something the other woman should have known better than to say, and if I am remembering things correctly, her instincts were proven correct in subsequent dealings with Miss Did-I-Do-That.

For whatever reason, that incident resurfaced for me in the immediate aftermath of the trial of Amber Guyger, the former Dallas police officer who was convicted of killing her neighbor, Botham Jean, in another daily episode of Being Black in America. Of course, everyone has an opinion and a perspective on what happened, and I too struggle with finding some resolution. Today, I find myself in the same WTF posture of that sister from that mediation class that I took so many years ago. I am incredulous that this case has become all about the redemption of Amber Guyger at the expense of rendering justice for Botham Jean, the man she killed. 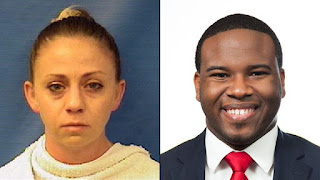 So let me put on my #LawyerLenses and start by addressing anyone who thinks that after all these years of watching Law & Order marathons, you earned some kind of certificate on the criminal justice process. Even with my expensive law degree, I had to pause and wonder aloud about a major element of this case, which is why Guyger was charged with murder, and not manslaughter. Because one of the first things I was taught in law school was the definition of murder. The second concept I learned was how that definition differs from other legal terms that describe the loss of one person's life at the hands of another. If you are so inclined, feel free to peruse Black's Law Dictionary to comprehend those nuances. Then if you have the time, commit a few hours a night to studying the Texas Penal Code and then try working your way through the Texas Constitution to get some insight into Texas Criminal Procedure.

However, let me save you the trouble--Guyger was brought up on charges for causing Jean's death, and there is little dispute that she entered his apartment and shot him. The drama of a public trial was to determine if what she did in killing him warranted some kind of punishment. And after a trial by a duly empaneled jury of her peers, she was found guilty of murder, but given a sentence that was more consistent with a manslaughter conviction.

Now, as I remove my #LawyerLenses and adjust my #ChurchLadyHat atop my head, this is where things begin to look fuzzy. After spending the better part of my life in the church learning the lessons of right and wrong, good and evil, etc., I find that this is one of those situations that isn't as neatly resolved by an Old Testament story or New Testament parable. This is that part of the service when the preacher admonishes us to look inside our hearts to render those virtues of forgiveness and mercy and grace. And while I sit with my eyes closed and my thoughts focused in earnest contemplation, I want a clean heart. So it is natural to empathize and mourn with this family that lost a brother and a son. Therefore, my personal feelings about the brother's decision to offer Guyger some compassion after the verdict are irrelevant. Forgiveness is his prerogative.

At this old school mourners' bench/mercy seat, prayers ain't over until everybody is overcome with emotion, so the preacher digs in and appeals on behalf of the woman who almost got away with killing her neighbor. While I can accept his family's choice to offer public absolution, does that also mean that I must follow the example of my fellow sister in the law Judge Tammy Kemp, by embracing Guyger after the verdict was announced? For all of the Christian sympathy and charity extended to Guyger, should I just forget that she allowed that man to bleed out on his own floor because she was more worried about losing her job? In this instance, am I allowed to be Jacob or must I do what Jesus would do and offer unconditional forgiveness?

Yeah, under the weight of that self-examination, my #ChurchLadyHat has become uncomfortable and heavy. So I take it off and tug at my string of #ClutchedPearls to determine what wisdom, if any, might come. And that's how I was reminded of that incident in my mediation class so many years ago. Knowing what I learned in law school and believing everything I was taught as a Christian, it is entirely appropriate to call cow manure by its rightful name. GTFOHWTBS

Amber Guyger wasn't the victim. She had competent legal representation. She had a fair trial. She was given an acceptable sentence of ten years in prison, which is a lot better than an acquittal or a mistrial. There are no legitimate grounds for appeal. The City of Dallas better be prepared to pay the Jean Family a hefty settlement in the pending civil case. Judge Kemp probably won't lose the endorsement of the police union or the criminal bar association when she runs for re-election. But anyone crazy enough to mount a judicial recall or to support her ouster from the bench over something as benign as a hug better be prepared for the old white dude who will replace her (and trust, he won't be handing out compassion).

For all of the good color-blind white folks who are perplexed about this case (because y'all don't see the racial elements), ask yourselves how much your vision would improve if the roles had been reversed, like it had been in this case from Minnesota. I do not recall that there were any attempts to discredit the innocence of that victim because the very idea of an unarmed white woman being killed by a Black cop is inconceivable in and of itself.

For all of the people who live for the narrative of the healing power in forgiveness, ask why you have yet to call on the Goldman family to extend forgiveness to OJ Simpson. To date, I haven't seen any calls for grace or mercy to be offered to Harvey Weinstein or Bill Cosby or Dr. Larry Nassar. Some of y'all are still salty that a Black billionaire has forgiven college loan debts he didn't even incur while simultaneously lamenting the fate of Aunt Becky. American exceptionalism is made possible in part by the narrative of Black Christian redemption, yet this country refuses to offer a genuine apology for slavery.

GTFOHWTBS. In my #LawyerLenses, my #ChurchLadyHat, and a strand of #ClutchedPearls, I exhort you not to take up precious time ruminating on the petty details of Guyger's Court TV makeover or what was inscribed in that Bible Judge Kemp gave her. All of that can be included in the Lifetime Movie starring Lindsay Lohan, along with a gospel choir cast as the Jean Family.

GTFOH Amber Guyger and every other police officer who only claim "blue lives matter" as an affirmative defense in confrontations with Black and Brown citizens. Nobody doubts that police work is dangerous, but that's why there is formal training. That's why police officers get generous benefits and pensions. Respect for the hard job of law enforcement derives from the oath taken to protect and serve the public and the implicit risk of putting one's life on the line in the pursuit of justice. The oath, the training, and the public trust are what separates the police from security guards, club bouncers, and vigilantes--not the colors of the uniform.

Support the Botham Jean Foundation that was established in his memory which serves the St. Lucian community of Caribbean immigrants to this country, among other social services. Vote in the next local election and answer the jury summons when it arrives in the mail. If there is someone in your family who needs a good job, send him/her over to the police academy instead of the post office. If you live in a jurisdiction where there have been bad community relations with the police, insist on better training to reduce incidences of unnecessary officer-involved shootings. Advocate for reforms to the Castle doctrine so that it cannot be used as an affirmative defense by an intruder in someone else's home. Let's do more than just protest and complain on social media about the unfairness of the system.