HBCU Just Give: Love Thy Neighbor

It was Homecoming at the Mecca this weekend, and for half a  minute I considered making an appearance on the Yard...because for the umpteenth time, I probably won't make it down to Atlanta to my own Homecoming festivities in two weeks. When I say that it lasted for about 30 seconds, that is an exaggeration, because that would be 29 seconds too long. But y'all know that I'm kidding because I love all HBCUs.

And that is not an exaggeration. I LOVE ALL HBCUs. So it irritates my SOUL when fellow HBCU alumni post booshay like this on their social media. ➨➨➨

I had a hard time deciding whether a response was even necessary, because there are times when it is best just to let others have at it, but then a few other offensive images/posts popped up on my timeline this weekend so I resolved to use this as an opportunity to put my $18.81 on the table. It also gave me an opening to re-introduce a project that I have been working on since the summer, which is the official re-launch of #HBCUJustGive.

It was just a few weeks ago that a friend sent me a rather upsetting article about his beloved Dear Old Morehouse. Then this local news segment was posted in our FB group, accompanied by various questions and then some earnest discussion about how we, as alumni, can intercede to make a difference. The announcement and celebration of Oprah's $13 million came a week later; yet, there was no announcement regarding a suspension of the furlough. So I'm betting that the cost-saving measures will remain in place because the gift from Oprah is restricted. For anyone who needs some translation, Morehouse still has to do some belt-tightening in order to make it through the 2019-2020 school year. Oprah's gift will benefit the students who are enrolled in the scholarship program that bears her name, but it won't pay salaries or keep the lights on in the dorms.

Allow me to break this down a little more for those who aren't understanding this--even Morehouse has financial woes. I don't know all of the details, but knowing that one of the most recognized HBCUs has to furlough employees means that times are hard for Every Blessed One of our schools. Perhaps then, our energy is better spent on thinking of solutions instead of airing petty grievances.

We are in survival mode. Some of us are on life support. And some of us might not make it to the end of the fiscal year.

Just to illustrate this point, take the donations that have been made to HBCUs by none other than Queen Bey herself. She gave $50,000 to be split between Spelman and Howard in 2017, followed by another $100,000 donation in 2018 that got split four ways among Tuskegee (AL), Bethune-Cookman (FL), Wilberforce (OH), and Xavier (LA) Universities. Folks were hyped even though those donations went to scholarships that benefited six students, one at each school for about a semester's worth of support. Mind you, our exuberance was rightfully attached to her highly celebrated Coachella performance, where she paid homage to the HBCU Homecoming experience. Compare those donations to the amount she and Jay might have paid to rent out the Louvre for a music video...

Still hating? Are you mad at those six students, or mad enough at Beyonce not to buy another one of her $200 concert tickets?

And speaking of over-hyped performances, let's discuss Kanye West, who decided to bring his gospel concert pop up to Howard University this weekend. From all accounts, it was well attended and inspiring and uplifting, and as usual, Yeezy courted controversy with a few of his remarks. And it was free, as was the event that was held later in the day at George Washington University across town. I also saw a rumor that West donated $1million to Howard as well, so I shouldn't have a complaint in the world about any of that, right?

Not that thousands of alumni and their families returned to their alma mater without incident this weekend. Not that Howard just entered into a partnership with Amazon that will provide a pipeline for more opportunities in Hollywood for creative talent. And so far, no confirmation that Kanye gave Howard anything other than a warm up for his show at GW. So instead of pushing Taylor Swift aside, he hijacks Homecoming. But at least his kids were dressed for the occasion.

Howard has been operating in survival mode for some time, selling off external properties such as the divinity school and the hospital. Just this spring, some dude suggested that the university should accommodate his gentrified dog poop or move. But some of y'all would rather be pissed that Howard ended up as the punchline of a Blackish episode. (Yeah, how about you call Kenya Barris out for not mentioning Clark Atlanta University--his own alma mater!)

We've got Black college students at PWIs emulating us to the point that they will claim an HBCU-ish experience, and y'all are mad at them. Instead of engaging in that foolishness, how about we get mad with them about the various microaggressions they endure at those institutions--the very reason why they need to create silly hashtags and why they are posted up at our Homecoming festivities...

As for how this all relates to #HBCUJustGive, my hashtag campaign that encourages All HBCU alumni from Every School to give back to their institutions in Any amount? Well, that's it. 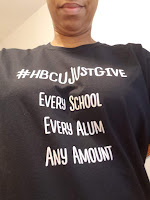 I had grand plans for a splashy big relaunch, but sometimes when things fall apart, it is a sign that you need a plan B. I will spare you the details, but right now I am working through Plan C or D, which will include a new series of articles and profiles that will be released on the blog and social media in the coming weeks. But I am also pleased to see that I am not alone in the effort to increase awareness and support of HBCUs via social media. Great minds think alike, so even if I didn't get to execute my initial idea, it's okay as long as the message is out there. Because we are in survival mode, this isn't about who did what and when and whatnot. Not every blessing comes from a celebrity. Worry about the checks you're writing that keep the lights on at your alma mater. And if you haven't written a check yet...

#HBCUJustGive
Posted by Ayanna Damali at 11:07 AM