Last weekend, I was in bed with some advanced mutation of this cold that been dogging me since the Kid went back to school, so I had time to catch up on a few old movies. I watched When Harry Met Sally again and yes, it is still the gold standard for romantic comedies. I also watched Soul Food again, and yes I stand by my declaration that it is a bad Black movie (not the worst, but still no good). And I had a chance to watch The Karate Kid (the 1984 original) and noticed quite a few things that I missed the first 100 or times I watched it previously.

For example, I didn't notice that the set up for this movie--a single Mom and her adolescent son moving across country is similar to the premise for Alice, the sitcom. I also didn't know that show had been based on the movie, Alice Doesn't Live Here Anymore. (And for what it's worth, I cannot explain why this was all so fascinating...)

Nevertheless, the reason why Daniel LaRusso ends up in California is less important than what happens to him, which is the real story. He makes a friend, but we quickly realize that he is not to be Daniel's real friend (since no one else would let his boy get his ass beat in front of a girl by a bunch of surfer dudes). Hence the May-December/East-meets-West bromance with Mr. Miyagi. Of course, this movie is terrible in every 80s way imaginable (movie soundtrack notwithstanding), but we loved it because it is a classic underdog story that just happened to indulge our interest in martial arts.

I didn't think that was much more to notice about this movie, other than the faint nod to West Side Story, but then I got to the big tournament at the end and something struck me. It has become a familiar sight these last few years: 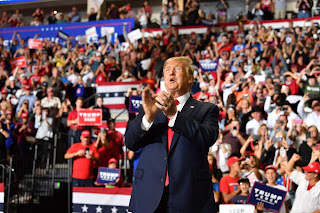 More specifically, if you were to zoom into this scene:

Which provides a partial answer to one of the most willfully naive questions I often see posed on social media: who are these people? Well, if you look close enough, you might note their resemblance to these folks: 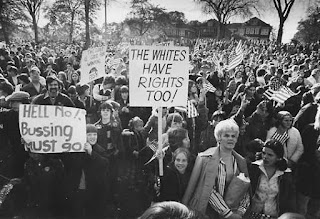 Who, as it turns out, are really not that much different than these folks: 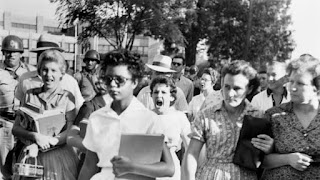 And I know that for some who tried to make the moral equivalency argument that these folks weren't much better: 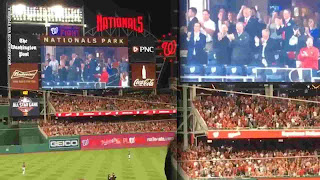 I beg to differ. Because to begrudgingly accept the free speech/assembly rights of one group while denouncing as un-American the incivility of another group is arguably more offensive and distasteful in my eyes. I digress...

When I first considered all of this, it was in response to the erroneous presumption that the support for this DESPOTUS and his policies were some kind of aberration. Well, they ain't. Throughout our history, large groups of people have proudly chosen to be on the wrong side of it. Some Americans were ardent British loyalists, Confederates, fascists, racists, and folks who voted for Ralph Nader. I'm sure that none of them believed that they were wrong at the time. Or perhaps they did know, which brings us back to the lesson of The Karate Kid. 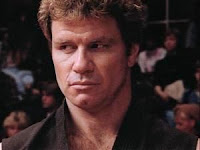 Kreese, the sensei of the Cobra Kai, was clearly that dude who thought he should have been the shit after high school, but for whatever reason, he flamed out. So he channeled that bitterness and resentment into ventures that allowed him to remain the same tool he had always been--the kind that people only interacted with by choice. And he figured out that being an unrepentant jerk came with certain advantages, such as cult-leader status among other like-minded assholes. (Describe anyone else we might know?)

Thus, the kids who chose to follow him did so because his ex-Hollywood stuntman bravado enabled them to terrorize others. Hardly a bunch of disaffected outsiders, these spoiled rich boys were already atop the social food chain, but that was not enough. Why else would a bunch of guys from Malibu go out of their way to pick on a kid from the Valley? Because the Cobra Kai were the angry mobs that burned down the Greenwood District in Tulsa, Oklahoma. They were the crowd that stood with Gov. George Wallace when he blocked the door to the University of Alabama in 1963. They were the Wall Street bankers who crashed the economy in 2008. They were the school officials who threatened parents with unpaid lunch balances. They don't lose any sleep over children sleeping in cages.

No mercy. Sweep the leg.

So instead of scratching our heads about what motivates their sadism, let's just stay in the fight. I noted a lot of allusions to Rocky, so go the distance. Focus. Find your balance. Put in the work. Stop complaining. Seek the wisdom of the elders who have experience and learn from them. Don't ever assume that a win in one tournament is a knockout that permanently ends the fight (as there is a new show about the next generation of Cobra Kai on YouTube right now). Much like sitting through the third movie, expending time and energy on appealing to their better angels is pointless because they are trash. Finally, in the words of Mr. Miyagi:

Posted by Ayanna Damali at 1:46 PM