An Ode to Daddy's Girls

I never knew Gianna Marie Onore Bryant (and didn't even know her name until this tragic moment), but I mourn for her today. When we first learned of the crash, in our collective shock we sent up prayers for her father and the four daughters he left behind. Then when we learned that she also perished in the crash, we cried. We've been crying since we learned that seven others were also lost in this tragedy1qw``.

GiGi Bryant at 13, had her whole life ahead of her. So did her famous father, who at 41, could have been my younger brother. One truism about life is that all of us believe we have a lifetime ahead of us, but in reality, we only have the time we get. There is no rhyme or reason to any of this. Death doesn't discriminate.

There will be plenty of tributes offered to the great, but complicated Kobe Bryant in the days and weeks to come, and most will mention his daughter. Of course, she wasn't really famous except for the fact that she was his child; nevertheless, she was a young basketball phemon just like her Dad. She might have been the third coming of the Bryant legacy on the hardwood, begun by his father and her grandfather, Joseph 'Jellybean' Bryant who played in the 70s and 80s. Apparently, Bryant had hoped that would be the case as he was her coach, and they died while en route to a basketball camp.

From every picture that has been posted, it is obvious that Gianna was a Daddy's Girl. Not every little girl has the blessing of having that kind of relationship with her father. As a Daddy's Girl myself, I am a testifying witness that there is nothing like that unconditional love from the first man in your life. NOTHING. Therefore, I will leave it to the obituary writers to properly eulogize Kobe Bryant (warts and all); I will do my best to pay tribute to the little girls like his precious GiGi.

Since I didn't know her, I have to use examples from my own life to frame this. I am a Daddy's Girl, as are my Nieces, and my daughter. I went to school with a bunch of Daddy's Girls, have worked with several in various capacities. As I've grown older, I've learned it isn't something we outgrow. And we are very easy to spot. Usually at some point in a conversation, we will reveal a Dad-specific detail about our upbringing or perhaps, we will mention something that we need to do with or for our Dads. There may be other anecdotal character traits that we all share, but all I know is that we are all unshakable in our love for him.

Our bond is symbolized by that mythical ring that folks say adorn our little finger, and it's true, our Dads are devoted to us. All over Facebook and other social media, I see all of these burly tough guys who are just head over heels in love with their daughters. I see all of these proud peacocks who brag about their baby girls--with toothy grins and chests poked out, they recite all of our accomplishments alongside their dreams and hopes for our bright futures. Our Daddies are our biggest fans. 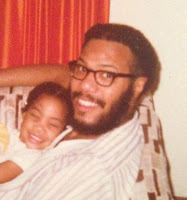 We are our Daddies Daughters. We tend to like the things that our Daddies like. His favorite music and his favorite sports teams are likely to be our favorites as well. Where our interests diverge, our Daddies' enthusiasm will never betray him. We tend to look like our Daddies, even when we look just like our Mamas; we become chameleons in their presence, sometimes reverting to being little girls, even when we are grown ass women. But we are also fierce Warrior Princesses, so nobody better mess with our Daddies! Because we regard our Daddies as larger than life, no one can compare to him. None of the dudes that we date, not even the ones who convince us to marry them...NOPE. That's why some Daddy's Girls never marry because no other man can measure up.

The Hub and I have had discussions about this over the years, and my retort is now and forever shall be, well now you have a daughter...and it was me thinking about how my world would implode if I ever lost these two that compelled me to write. 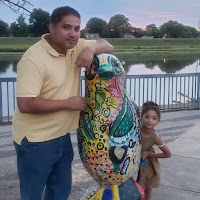 So it doesn't surprise me that Gianna Bryant loved basketball and that her father was her coach. It saddens me that they died together, but it is also comforting to know that they were together. That doesn't make this tragedy any less devastating, because there is a mother and three sisters and extended family in mourning right now. Not just for the Bryants, but also for the Altobelli family, the Chester family, Ara Zobayan (the pilot), and the Mauser family.

Last night before he went to bed, I overheard the Hub listening to Dear Theodosia from the Hamilton soundtrack. It is one of the tunes he and the Kid sing to each other, and so if there was ever a moment when I could read someone's mind, that was it. Similarly, I was not surprised to the see my social media timeline flooded with messages from dozens of doting Daddies. My Dad called me this morning just to check in.

Rest well, GiGi. You made your Daddy so proud. 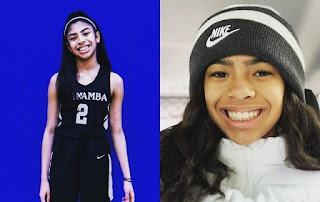