I Hope You Dance

When daylight dies and o'er us calm is hovering
Come to us then and whisper words of peace...

Tomorrow will be one of those days when I will have to confront what I once considered unimaginable. I have to formally say goodbye to a dear friend, and if I am able to get through the day, then it will be the first of many unfortunate mid-life crises I will have to endure if I live long enough. Writing those words if I live long enough after having spent the last couple of weeks living in a haze doesn't bring clarity or comfort. It just allows me to express some of the emotions I have been holding inside since December 24.

Anyone who knows me well can tell you that there are a few ride or die folks whom I call friends. These are a handful of people who have seen me at my best and my worst, and who still love me in spite of myself. Each of these people come from a specific time and place--family, Spelman, law school, Capitol Hill, Delta, church, or St. Mark's Dance.

Karen and I met as kids in dance. I've been wondering if I have been recalling my exact age correctly, but I was about eight or nine years old when I first met this very tall and aloof teacher's assistant at my first ballet class. The weird thing about memory is how some facts and details are inexact while others are crystal clear. In that vein, what is unforgettable about when we met is how I looked up to this nearly six-foot tall twelve year old. She had long legs, long hair, wore braces, and wore a black leotard, which in traditional ballet was indicative of maturity and skill level. As a late beginner, I wore a light blue leotard, so there was no way we could be friends even though we were only three years apart in age. She was already dancing en pointe with the teenagers in the Junior Company and with the adults in the Senior Company, so in hindsight, it is more accurate to say that I was a kid when we met.

By the time we were taking the same ballet classes and I had advanced to wearing a black leotard, she and the other Junior Company members were in high school. I was a nosy middle schooler who had to wait for my Mom or walk to my grandmother's house after class, so I only got to listen in for a few minutes while the older girls chatted and changed out of their toe shoes upstairs in the old dressing room between class and company rehearsal. I gleaned a few details about boys, hairstyles, and college applications, but I was still just an awkward kid who couldn't imagine that she and I could ever be friends. That belief didn't change much a few years later when we were students at Spelman together, only overlapping by a year because she graduated early.

Fast forward to us connecting at a local alumnae event and then again at the dance studio a few years later. By this time I was a young attorney; she was a college professor. I had been taking ballet classes off and on for about two years when it was suggested that I should join the Senior Dance Company. Again, the details might not be as exact, but when I was subsequently invited to a baby shower at the studio, we reconnected for real. We discovered that she had been one of my Dad's math mentees, which bound us closer. And over these past 15+ years, we became more than friends. We became sisters.


So tomorrow will be one of the hardest days of my life. I have attended the funerals of relatives, classmates, sorors, people from the dance community, folks who have worked with my Dad, and the parents of my friends. I have never experienced the heartbreak of losing a close friend, especially not the sister-friend whose life intersected with mine on all of those levels. 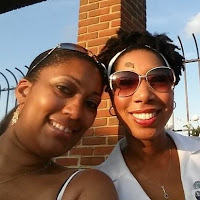 The friend whose living room I was in just a few months ago, trying to sort through the details of her sudden illness. The friend who assured me that she would be alright, before revealing the truth of her diagnosis, so I believed her because I know she thought she would survive this too. The friend who bore the painful loss of her father under similar unexpected circumstances just three years ago, so surely life couldn't be this fucking cruel.

The friend who was my Spelman Sister, my Soror, my dance partner, my three amusement parks in one day buddy, my co-conspirator, my girl-let-me-tell-you, my OG Busy Black supporter, my career counselor...my sister whom I will miss for the rest of my life. So instead of goodbye, I hope you dance.

I swear I hope there is a Heaven. Since we won't get to grow into know it/seen it/done it all old ladies together, I hope that when my time comes, you are standing there at the gates waiting to welcome me with a scroll of stories. I hope that in the meantime, you will watch over me, shake your head as necessary at the various mistakes you would have avoided, and that some of the genius you shared with the world will blossom into some magnificent gift. I already believe my long-legged dancer-in-training inherited some of your confidence--my reminder that a woman who navigates this world with confidence and self-assurance can do anything she sets her mind to accomplish.

And when life's race is won,
Thy noble work is done,
Oh God, forever bind
Our hearts to thine.