Since the start of this pandemic, I have spent way too much time in front of the TV, so that has given me a chance to notice that this is a milestone year for Black Entertainment Television. And well, that deserves a celebration!

I want to start out by saying that 40 years ago, I was a kid who lived with parents who did not believe in cable television. And I was young enough not to have known if I was missing anything. The year Robert Johnson got a $15,000 loan to launch BET, my parents might have just bought their first color television. We were still very much living in a VHF/UHF world. Our orbit revolved around the three major networks, two syndicated channels, two public television stations, and access to local affiliates from Baltimore (which gave us two chances to watch all of the same programming).

Still, I was aware that there was a Black TV channel, especially by the time I reached the higher grades of elementary school. By that point, there were two distinct groups of kids--those who had cable and those who didn't. According to my understanding of things, we should have had cable because my parents could afford it, but that argument went nowhere. So I tried the peer pressure angle: so-and-so's parents have it and...that was all I ever got to say before my feelings were hurt.

Whenever I went to visit a friend who had cable, I don't recall that I was missing anything special, at least not at first. With the access to the channels we got for *free* I saw everything that was important in the 80s--The Cosby Show, Fame, Soul Train, soap operas, reruns of sitcoms, and most importantly, I saw the Thriller video (on network TV when it aired). I saw Motown 25, the American Music Awards and the Grammys, and pretty much everything else of significance from that era, so apparently what I was missing out was the right to brag about what I could have been watching. Which was mostly movies without commercials, but we had a VCR (VHS when everybody else had Betamax), so again, I wasn't missing anything yet. These were the early days of both MTV and BET just as everything we understood about music was about to shift.

My recollection of the complaints about MTV at that time was that they wouldn't air music videos by Black artists until the Thriller video debuted in 1983. That was also true of shows like Friday Night Videos, which aired on network television. I had to sneak to stay up late to watch that show and it often went weeks at a time without showing any videos by Black artists. Before anyone goes there, let me state for the record that most of my peers were cool with watching Madonna, Boy George, and Phil Collins videos and we are as nostalgic for those artists as we are of New Edition and Atlantic Starr. However, we wanted to see ALL of our favorite artists.

If we wanted to see videos by the artists who were popular on urban radio, our options were limited to shows like Soul Train, that might air one video per episode. For a few years locally, we had a video show called the Music Video Connection which offered us more of the content we wanted, but again, that meant staying up late on the weekends to tune in. (Side note, I had to dig deep to find evidence that this show existed, so enjoy this brief intro and video by  Cherelle). I can only imagine the slim pickings for those in other communities outside of major urban areas. If all they had was Soul Train, imagine how disappointing it was to want to see the latest LL Cool J video, but end up with Maze featuring Frankie Beverly instead (no disrespect, but that reflects the generational dynamics of the time). As hip hop was blowing up thanks to the mainstream success of movies like Beat Street (1984) and Krush Groove (1985), there were niches within niches of musical programming that helped the stars align for BET's early success.

While this only frames the importance of the network with respect to its popular music programming, over the years, it has been clear that BET served and still serves as an outlet for Black entertainment and information. Where else could we find shows like Teen Summit? What Christian broadcasting channels would have given a platform to a traditional gospel music show hosted by Bobby Jones? Who else would take the time to tell little Black girls that they Rock? How many other networks employed as many Black executives, producers, audio/visual technicians, and on-air talent? Who remembers when BET published magazines like Heart & Soul and Emerge (and this haunting cover story about Kemba Smith)?

To those who question the necessity of an all-Black television network as somehow racist or exclusionary, it is important to emphasize what you choose to ignore about mainstream representation. And that is, unless there is a need for Black talent (and/or Latinx, Asian American, LGBTQ, etc.), we tend to be marginalized by limited opportunities with just a few openings for individuals to break through. As with every other institution that we have established, it was to fill a need and to provide a space for Black talent to be nurtured and groomed. Where other channels would have considered a daily airing of We Are the World every couple of hours as progress, BET did so much more.

BET helped to facilitate the integration of Black music and culture into the mainstream. It took the Thriller video for MTV to take notice even though our cultural impact had always been significant and transformative. For example, even though Yo! MTV Raps (1988) preceded BET's Rap City (1989) by a year, rap videos had already been in rotation on BET since 1983. Both HBO's Def Comedy Jam and BET's Comic View started in 1992, within months of each other. One might assume that that these four shows occurred within a Black cultural moment (it was the late 80s and early 90s after all), but would any of that have been possible without the existence of BET?

Of course, being a pioneer meant BET was an easy target for scrutiny. By the time I finally got cable (as an adult) in 2005, the network was a mess. I saw plenty of what had been offered over the years, and there was a significant change in programming that occurred in the early 2000s, coinciding with its acquisition by VIACOM. I can recall the intense criticism levied at BET for reflecting what was thought to be the worst of Black popular culture. Ironically, a special on Vh1 (its sister network) amplified several of those critiques, as did statements made by one of its own founders, Sheila Johnson. I had my own issues, which was why I initially preferred TV One, a competitor network launched by Cathy Hughes in 2004. (And just to insert another historical connection here, Hughes and Bob Johnson both got their start as media moguls here in DC.)

In hindsight, it was unfair for BET to bear the brunt of that criticism--somebody had to create that trifling content (audio only)... Anybody who watched reality television in the 2000s (and that was most of us) should remember that some of the most egregious crap aired on other networks, most notably Vh1 and MTV. In fact, the show that led to my denouncement of the genre altogether aired on BRAVO, a network that underwent its own transformation in recent years. However, I do believe it was fair to expect better of BET and our complaints eventually yielded positive results.

Today in the midst of this pandemic, I am more likely to turn to BET for a reprieve from the constant churn of the 24 hour news cycle. I used to lament the absence of news programming on the network since the departures of Ed Gordon and Jacque Reid; instead I can escape to an old movie. If I need to get caught up on the crazy, I can tune into programs hosted by any number of Black journalists from Joy Reid on MSNBC to Don Lemon on CNN or Harris Faulkner on FOX. I am more likely to find reruns of my favorite old sitcoms on BET than on any of those other networks that air retro shows (although you can stop running Martin, thanks). If I want to watch less controversial reality programming, I can tune into BET Gospel with my Kid. As a writer, I appreciate the written word and would love to read an engaging, well-researched long-form magazine article...but I am in the minority there, and a televised documentary on Trayvon Martin is accessible to more people.

I call it the new and improved Black Entertainment Television. For those of us who have grown up with the network, we can look back on periods of our lives when we made some questionable choices. (Yes, that is a throwback to Sherry Carter's  wacky 1990 New Edition interview, because if growth was an outfit...)

Sure there is always room for improvement, but I think that it is the folly of expecting one media company to be all things to all people. Past criticisms of BET occurred in a world where it stood alone whereas now, there are additional channels on the spectrum such as Aspire and Bounce that also provide programming aimed at Black audiences. Healthy competition has made it necessary and possible for BET to mature. 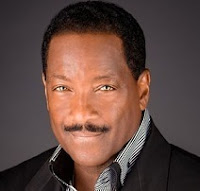 While researching this piece I fell down a rabbit hole of local DC programming history that unfolded alongside the birth and early stages of development for BET. While that is a entire topic for another piece, I will tease with this picture of the legendary Donnie Simpson--any tribute to BET must include a reference to DC's own Green-Eyed bandit. He was already a fixture on local radio and as one of the earliest faces on the network, he represents the many people seen in front of the camera as well as those behind the scenes that made this idea of a Black entertainment network into a reality.

Happy 40th Birthday BET and hopefully, many more to come!
Posted by Ayanna Damali at 10:38 AM