Land of the Free

When I woke up on Memorial Day 2020, I scrolled through my phone for a few minutes and came across some video footage on Twitter of a group of protestors in Kentucky. I don't wish to write another piece about the absurdity of protesting against public health and safety pronouncements made for the benefit of the common good--so I won't. Instead, I will write to educate you about the imagery and the symbolism and the historical significance of what happened outside of the Governor's mansion. Don't forget I taught American History in a previous life...

I have never been so naive as to assume that there are no depths to the depravity that is synonymous with certain displays of patriotism. While there are some who question the morality of that stunt--what about the children who saw that, I wonder if that same question was ever asked when there was a real human being swinging from a tree while supposedly good, respectable folks posed for the cameras. Did anyone deign to ask that question with concern for the children of the man or woman who had been strung up? Were their frightened offspring safer hiding in the bushes, or under a car seat, or were they curled up under a bad or in the back of a closet? When the angry mobs swarmed to claim Black soldiers dressed in their uniforms to slaughter them for the crime of existence, who expressed outrage and disgust as the flag and flesh burned together?

Mind you, Governor Andy Beshear's children were watching that spectacle from behind lace curtains in a mansion. That was not their actual father who was strung up in that tree, but his image was affixed to a symbolic black body. Take a closer look, and don't you dare look away or try to rationalize it.

Look straight at the recycled totems of terror visited upon one of your own. Sure, be outraged and horrified because it is disturbing. It is sickening. These men are probably good people (see how that phrase suddenly feels like a dagger to the gut). Good people who just want to proclaim that they are free. And to prove it, they played Lee Greenwood in the background because nothing signifies good old-fashioned American freedom quite like that gawd-awful self-righteous bullshit anthem.

A little over 100 years ago, Charles Lewis wanted to live free too. He was a veteran of World War I, and after being discharged he returned home to Kentucky. I'm sure he expected that his military service would afford him the rights guaranteed in that Constitution y'all love to swear we don't read. So when he was accused of a crime, resisted arrest, was pursued and then jailed, never given a trial, and then executed all without due process in his uniform...yeah, good people, free to kill. 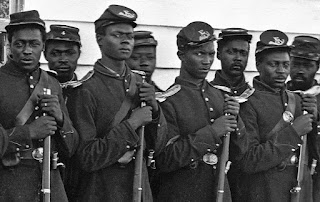 So it is not at all ironic that on what was once known as Decoration Day, a day that formerly enslaved people and white missionaries initially organized to bury Union soldiers, a few good men chose to rile up the passions of the inconvenienced mob. It is fitting that for this Memorial Day weekend, a day after a roll call of nearly 100,000 names was published listing all of the American casualties of this pandemic, we crowded beaches and boardwalks because we, the living, are free. It is entirely appropriate on this Memorial Day that a picture of a public figure wearing a protective mask is the object of ridicule; whereas, the choice to armor up to buy a soggy sandwich is peak patriotism.

We take great pride in placing little flags beside the headstones of our honored dead that are buried in military cemeteries. We live for the pomp and circumstance of draping coffins with flags. Because of them we are free, we proclaim.

YOU are free because WE wear the masks.

When the poet Paul Laurence Dunbar penned those words, he had no idea that we would still need to wear metaphorical masks more than a century later. Not just to hide our contempt for the hypocrisy of liberty as exercised by good people, but in order to survive. We've had to camouflage our beautiful Black, Brown, Indigenous, Muslim, Queer, Imprisoned, Impoverished, Differently-Abled, Elderly selves just to be regarded as halfway human.

This Memorial Day 2020 weekend should have been a solemn time of reflection, perhaps even prayer--after all, the DESPOTUS had already declared the imperative for churches to re-open. Instead, those good people in Kentucky thought it was a better idea to resurrect imagery of domestic terror to combat their idea of government tyranny. They must have been encouraged by the praise heaped on the good people who had attempted to storm the State Capitol in Michigan several weeks ago. They also brandished Confederate flags, so imagine the shouts and cheers when the next group of good people burns a cross on Independence Day...

Because they're free.
Posted by Ayanna Damali at 6:48 AM