The Wind is Back

For every step forward we take in ridding ourselves of racist pancake mix and out-dated amusement park theme rides, we take two steps backwards with federal executive orders protecting statues, white people rioting at the Trader Joe's, and Gone With the Wind returning to HBO Max. We should have known that the first two steps were forthcoming--the DESPOTUS had a bad weekend of headlines and that nice lady just wanted some brie. And in all honesty, I knew the third step would happen eventually because y'all just love Miss Scarlett O'Hara.

Not that I blame you. She is the original Steel Magnolia.

Before I delve into a critique of this most interesting culture war chess move (because it was absolute genius to get a Black woman to explain that reversal), let me admit that I have been known to watch GWTW at least once a year when it airs on Turner Classic Movies (TCM). It has been my intention for quite some time to come clean with that confession, and to make all kinds of excuses why I subject myself to this annual tortuous melodrama. But I never had a good enough reason until now.

So here is a quick history: I first saw this film as a child. It aired on television, and my Dad must have been out of town because I remember seeing it with my Mom. I'm sure that I didn't watch the entire movie in that setting, but I definitely recall the scene when Butterfly McQueen's Prissy got slapped. And I remembered her from the ABC Afterschool Special where she portrayed a fairy godmother. The detail that my Dad must have been out of town is very significant as he would NEVER allow us to watch that movie in his house. (And as an aside, I'm pretty sure that when Song of the South was re-released in the theaters a few years later, that was a solo trip with Mom because I can't imagine he would have stood for that either.) Fast forward to my college years in Atlanta where the film could be seen daily at the CNN Center, or at least once a year when it aired on TBS. I think I watched it over Thanksgiving weekend the semester before I took my Images of Women in the Media class. A few years later when I was in law school, I tried again, but was drunk by the second half...

We shan't address that though. Instead, we will address how GWTW aired for years with no disclaimers, context, or other attempts to mollify the feelings of Black viewers. GWTW is so embedded in our culture that despite my intentional efforts to avoid it, that was nearly impossible in the South where I lived for seven years. I lived in Margaret Mitchell's Atlanta and Belle Watling's brothel (New Orleans). There is always some popular reference to it, such as this famous Carol Burnett Show sketch or the controversial spoof written by Alice Randall, The Wind Done Gone (2001). Every tall, dark, and handsome scoundrel on television is a version of Rhett Butler (here's looking at you, Victor Newman). Dedicated viewers of the Academy Awards recognize that the play-off music when someone is talking too long is the GWTW theme.

(And as a humorous aside, I thought GWTW was originally a black and white film that had been colorized by Ted Turner. Part of the reason why I believed he insisted on showing it every day was to rub the fact that he owned it in the face of his critics...but I was wrong. The original movie had been filmed in color; however, Turner did colorize a bunch of other classic films, hilariously spoofed here. I really want to add a bad pun right now, but read on.)

Years later when I was teaching and I finally had cable, I decided to watch the movie again to help me understand this idea of the Lost Cause. Somehow providence had aligned the timing, so I watched this film in its entirety, sober and with an open mind. On the one hand, there is the historical context and the convenient glossing over of major issues (in particular, the night raid scene which was technically a Klan rally gone awry); on the other, there is the love story. There are several other layers to this film that I will briefly interpret for your consideration: Scarlett is no heroine; Ashley Wilkes is a fuck boi; Rhett Butler is an abusive asshole; Bonnie Blue is a cautionary warning to all of us raising these spoiled ass children; and everybody who hates Scarlett is a mean girl coward.

As for the servants...it is obvious why Hattie McDaniel won the Oscar. She steals every scene that she is in, and with all due respect to Olivia de Havilland (who was also nominated), it is not random tokenism that resulted in McDaniel becoming the first Black recipient of an Academy Award. And while I will never understand her acquiescence to segregation in her attendance at the ceremony, I won't second-guess her earnest assumption that this would be the biggest night of her career. It was, and she never achieved any subsequent career triumphs, nor has the passage of time afforded her any more respect--not even from the institution where she bequeathed that Oscar. 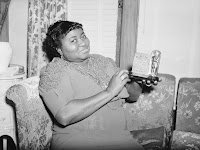 Apart from that, I understand the enduring allure and seductive power of GWTW. Once we look past the antebellum bullshit and the overuse of the word honor, there is a compelling story that pits a woman against a changing world for which her ruthlessness equips her to handle better than nearly everyone else in her orbit. To really get the point of this movie is to ignore the fainting Aunt Pitifuls and jealous rivals, the ridiculous love triangle, and even the Confederate flag to see that Scarlett O'Hara doesn't give a damn about any of that. Her goal is to survive, and in that most pivotal scene at the end of the first act when she vows never to be hungry again, she makes good on that promise for herself and everyone around her.

That is how I got sucked in. Once I chose to ignore all of the egregious melodrama and Southern redemption themes, I saw the heart of the film. Yet, that is what makes all of us guilty in perpetuating the mythology of timelessness and greatness all of these years. We see what we want to see. From the very beginning of the film with its anticipation of the coming insurrection to the physical and emotional abuse Scarlett endures from Rhett, this movie is TERRIBLE. Why can't we see that? In comparison, only but the most die-hard fans shed tears for Song of the South, which has been locked away in the Disney vault since the 1990s. It has a lot of the same revisionist themes (at least from what I remember having seen it 35+ years ago)--well, it gave us Zippidee Doo Dah and earned James Baskett a special Oscar. Surely that is epitome of the American Dream, to receive special recognition from his peers for his convincing portrayal a formerly enslaved person? Yep, that sounds just as bad as the lies she tells herself about her racist pancake batter.

We only see the racism if we want to see it. We can pretend that the night raid scene was some gallant effort at protecting Scarlett's feminine honor because that is what Saint Mellie said, or we can instinctively know better. The warning not to drive through Shantytown unheeded, Scarlett was either going to be raped by the white guys or robbed by the Black guy (or both) until Big Sam came to her rescue. She had been such a good Mistress, so of course for his troubles he probably got a hot meal cooked by Mammy and some new shoes. And maybe the opportunity to work Tara again, or a job at her lumber mill--golden opportunities both, to live the American dream by returning to the very conditions he had been in prior to the war.

Ever think about why there was a Shantytown on the outskirts of Atlanta, why in the midst of the rebuilding and prosperity that kept Scarlett clad in her fancy frocks, there was such homelessness and deprivation? Perhaps it is because you missed the conversation that took place just prior to her ill-fated ride wherein Scarlett insisted that her use of convicts to work her mill was justified to keep her from losing Tara. Convict leasing was another form of labor exploitation, similar to sharecropping...previously known as slavery. And what were those nice Christian ladies sewing? I'm guessing bedsheets.

GWTW euphemizes what Birth of a Nation (1915) put on full display.

But y'all refuse to let it blow away, so you asked Jacqueline Stewart to give you permission cover to revive it. Don't think that detail had slipped my notice. So this is what happens when you finally decide to listen to Black women? The effort expended on defending this movie pales in comparison to the effort put into finding Hattie McDaniel's missing Oscar. Yeah, don't think that I let that detail escape my notice either. If anyone really cared about ensuring her work was appreciated, they would lobby the Academy to replace her statue. Seriously, just present another one to her surviving family and let them decide what to do with it.

Or just admit that your plantation fantasies are the real American dream. Your love of Scarlett O'Hara is no different than your admiration for every other beautiful 'benevolent' billionaire--you don't care about the hurt feelings of Black people because our humiliation is part of the fantasy too. The enslaved, migrant farm workers, the undocumented, the incarcerated, essential workers, etc., we live in Shantytown, not on plantation estates or golf courses. We sit at the small table in the back corner of the room, waiting to collect worthless consolation prizes for which you congratulate yourselves for conferring on us. If we're still offended after 80 years of you telling us that this is just a movie...frankly, why should you give a damn.
Posted by Ayanna Damali at 12:00 PM