Did You Know Him: Tribute to Patrick Ellis

Last year I had intended to write a tribute about a beloved local radio host. I mentioned him a few times in other posts I wrote about various topics, but never got around to doing what I had hoped not to be doing right now...but here we are, thanks to the coronavirus pandemic we are mourning the passage of the legendary Patrick Ellis of WHUR. 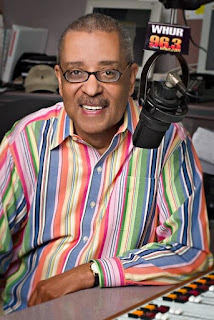 I am too stunned and too upset to go into all of the ways this news has hit me, because for as long as I can remember, this man's voice has been a part of my life. As in, I remember hearing his voice on the car radio when my Dad took us to Sunday School with our Grandmother Hawkins. As in, I don't remember a time not hearing him on the radio, including the seven years I was away at school. As in, I always could tell when he was not on the air because his sub (Jacquie Gales Webb, who always gives her full name) just has to throw in more contemporary gospel during her set. As in, I just heard him on the radio a couple of Sundays ago. As in, when I first read someone's status that broke this news before reading this obituary, I was in utter shock...because Patrick Ellis is like an uncle (just one that I never knew personally). However, in DC, everybody knows somebody who knows the person you don't actually know, because this is a small town where everybody IS somebody. Patrick Ellis' Sunday Morning Gospel show is one of the main reasons why that is so.

We all knew him just as we all knew the folks who sent in birthday and anniversary announcements for him to read on air. We all knew somebody who went on one of those trips to the Sight and Sound Theater or to Woodbury Commons. We all knew somebody who attended one of the churches that got a regular shout out for their choir concerts and usher board anniversaries. We all knew that if you heard a certain song from his playlist, you were probably late for church. And we all knew that he played this same organ/flute version of Come Ye Disconsolate every Sunday, and now I bet some of you are just learning the name of that song...

I cannot summarize or adequately express the emotions I am cycling through right now, because on the one hand there is the disbelief and anger at everyone who casually shrugs off the severity of this pandemic. It is real. There are real lives that have come to an abrupt end from a virus that is no respecter of person, yet has been particularly discriminating and devastating towards people of color. In the months since this thing started, nearly everyone I know has lost someone. Now we've all lost Patrick Ellis. On the other hand, I can't help but to reflect fondly how one man's life has been such a blessing to so many for so long. Most of us only knew Ellis from his weekly radio show, but he ministered to us over these past 40 years just by playing music and calling out our names. The irony is that this would be one of those moments when we would look to him to play a song of comfort.

Life happens fast. Like I said, I just heard him on the radio a couple of Sunday ago, broadcasting from his home studio. I often told my husband that whenever Ellis took a Sunday off, my Sunday was off. There was just something special about his soothing and calm presence on air. Yes, his playlist was predictable. Yes, he was seemingly reluctant to incorporate more contemporary artists. Yes, I did wonder how much longer he planned to keep working and how folks would manage without him.

Sadly, here we are, and in the cliched way that we often make statements like this, Sunday mornings will never be the same. For starters, who still listens to radio (except in the car) when there are other dedicated venues to accessing gospel music any day of the week? The whole point of having a birthday or anniversary shout out is for folks to hear it, which is why I never got around to making a request (most of my friends probably wouldn't have been listening). This is truly the end of an era.

Yet, in honor of his transition and in appreciation for the 40 years of Sunday morning inspiration, I pulled together this playlist of a few personal favorites (no theme, just selections from what he played over the years). Of course, this is by no means comprehensive, but it represents various stages in the evolution of gospel music and the constancy of Ellis in the midst of that:

I Just Can't Stop Praising His Name/Call Him Up (1980) - Min. Keith Pringle and the Pentecostal Community Choir

Jesus Can Work It Out (1980) - Dr. Charles Hayes and the Cosmopolitan Church of Prayer Choir

You Brought the Sunshine (1981) - The Clark Sisters

Yeah, I got a little carried away...FYI, last night the station aired this tribute to him which I am listening to now.

One final note, if coronavirus has taught me anything, it is that life is finite. We don't have as much time as we think to accomplish the things we want, so we need to figure out the best way to live our best lives NOW. As I mentioned previously, Ellis intended to broadcast his Sunday morning show from a home-based studio because that is how much he loved his work. As many of us fumble and stumble around through life, we make the mistake of assuming our purpose is tied to a job, a title, the stuff we accumulate, but honestly it is imperative to imagine that life is so much more. Life is about who you love and the joy you bring to others. And a life well-lived is one that allows us to be grateful for the joy, even in the midst of sorrow and pain.

Rest In Paradise and roughly quoting your sign off: many thanks to the Master for giving us these 40 years of Sundays with Patrick.
Posted by Ayanna Damali at 9:15 AM