It All Falls Down

As has been the case with everything this year, we've just experienced an unprecedented Independence Day weekend. My days were quiet because the Kid got to spend time with her cousin (but at night, it was bombs bursting in air). It was nice to see friends and to have adult conversations that were not constantly interrupted. In preparation for the next lock-down (yeah, because y'all keep doing the most), I decided to order as much liquor as I might need to get through the tentative start of school. Because 5 year old drama in quarantine requires top shelf and heavy pours.

On Sunday, I noticed two trending topics that I should have known would trend because y'all can't be satisfied unless there is something to deride. So let's start with how this article about Anna Murray Douglass, written two years ago, suddenly began circulating just as folks were publicly citing her husband's famous What to the Slave is the Fourth of July speech. On Friday, I noted an uptick in the number of people who had made reference to the speech, including this inspirational reading by the Douglass' descendants on NPR. Thus, it was not surprising that the backlash would soon follow on social media. I saw this tweet, then there was a debate in one of my Facebook groups, then on Monday morning I saw the news that a statue of him was destroyed in Rochester, NY. It only took three days...

Similarly, on Friday I noticed that as Lin-Manuel Miranda's Hamilton began streaming and folks were excitedly watching it for the first or fourth or fiftieth time, the perpetually disgruntled were airing their cranky pants out on social media. Some complained about the idea of having to stream it from an exclusive service; others proudly proclaimed that their hatred of musicals saved them from partaking in such trash. Meanwhile, I was low-key jealous (I don't have Disney + because we already pay an arm and a leg for cable, HBO and this wifi connection I am using from my back yard), but I know that I will get to see it eventually. Then I noted the criticism changed from calling it over-hyped to historically inaccurate. They even invoked Toni Morrison's alleged disdain for the play in the effort to justify the bashing. That only took five years...

Sometimes our heroes are flawed. Deeply. Because they are human. That isn't a very profound statement, yet, as we find ourselves in this national moment of reckoning with the past, we need to be prepared to accept that no one's legacy is safe. Someone will go digging through your trash, your old tweets, and in that long-buried trunk of skeletons from that hidden closet to uncover the worst of your sins. And once revealed, there will be a giant floodlight trained on your flaws, and people will judge you. Or in the words from this refrain from Hamilton, history has its eyes on you.

It has been quite the spectacle to watch monuments that never should have been built come down, so gird your loins. Everyone will be scrutinized more closely...everyone except the living, breathing, racist/sexist/xenophobic/homophobic degenerate in the White House who spent the entire weekend shooting off fireworks, hurling insults, and lobbing Molotov cocktails in defense the long dead losers of a vanquished insurrection. November is coming, but go on, and debate Jemele Hill's stupid tweet about Lift Every Voice and Sing...


Back to the reckoning--we have been given this choice at this moment in the midst of this pandemic to re-imagine who we are supposed to be. This nation is at a crossroads, and if it is so self-evident that ALL of us have a right to life, liberty, and the pursuit of happiness, then that is the task that lies before us. With liberty and justice for ALL: not just to those whose ancestors came on the Mayflower; not just those who pray from the Bible; not just those who grew up on stories of being greeted by Lady Liberty in New York Harbor; not just those who speak English as a first language; not just those who live on propaganda and call it news; and not just those who advocate that unborn lives matter more than Black lives.

We're smart enough to know that the Frederick Douglass statue that ended up in the river wasn't destroyed by an mob of angry feminists (because he was himself an early feminist in the 19th Century understanding of that concept). And quite honestly, we (women) are more likely to act impulsively against sins committed against us personally, not on behalf of someone else. As someone told me this weekend, we (Black people) don't really cancel folks, and we definitely wouldn't tear down the great Orator for being a bad husband. So whomever your drunk, racist ass is, we will be on the lookout.

But I will take a paragraph or two to deconstruct this Hamilton backlash and the concerted effort to undermine the success of one of our own (which we absolutely would do, especially on social media). I've been a HamFan since I bought the soundtrack, but I am willing to put aside my love for the music to address the legitimate historical concerns head-on. It is a play. Specifically, it is a musical that re-imagines the life of an all but forgotten Founding Father. It stars Black and Latinx actors whose casting alters the perspective of how we visualize our place in this country. Yes, there are inaccuracies that are undeniable and very problematic. Alexander Hamilton was not an undocumented immigrant in the way we define that term today, nor was he an abolitionist (not owning enslaved people isn't enough to qualify, but thanks for trying). However, if you are the Latinx composer and titular lead, you are not going to write yourself into the role of an outright villain, are you? No, you take creative license and give that role to your friend. 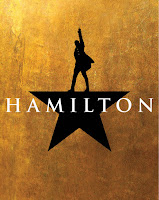 Who lives, who dies, who tells your story?

Hamilton is not a federal monument nor a state flag. It can withstand the scrutiny of being disliked, avoided, and even denounced by the great Toni Morrison. Nobody who chose not to watch or who expressed disparaging opinions will be prosecuted for slander. Disney will get your coins some other way. Y'all can go watch Ishmael Reed's play and declare yourselves sufficiently enlightened.

Yet, this thirst to tear down and cancel folks will eventually become a circular firing squad. I'm not sure why Miranda deserved to be taken to the woodshed on this round, unless all of that negative energy was fueled by something other than a visceral hatred for musicals. Just asking for a friend, but what do y'all only like documentaries?

Not that it matters because eventually, it all falls down. Our heroes, our statues, our flags will be assessed by future generations and they will decide what monuments will remain, which ones will be tossed into the river, and what will be erected to fill up the vacant spaces. Maybe they will decide to put everything into a museum, host an Ivory Tower colloquium, or they might buy the DVD for private viewing (if that is still a thing). Who would have thought that Harriet Tubman might replace Andrew Jackson on the twenty dollar bill? Who would have thought that even old Honest Abraham Lincoln would become so controversial?

Who lives, who dies, who tells your story?
Posted by Ayanna Damali at 8:57 AM