Address Me By My Name

The disrespect that some people seem to have for powerful women is astonishing. And I mean, WOW...these same dudes show more respect to the ceremonial head of State of our former colonial masters than they do to women born here who have rightfully earned their honorifics. That ain't right, so the Busy Black Woman is here to remind you to put some R-E-S-P-E-C-T on our names!

1. Senator Kamala Harris - Of all the things we are not forgiving Susan Page for after the other night when she could not manage that debate, we are not letting her forget her slip up in not addressing Senator Harris correctly. Now it might have been forgiven as a minor faux pas if this had been in an interview, but this was in the only Vice Presidential debate. To make matters worse, Page repeatedly gave broad leeway to the Vice President when he flauted the rules, then barely gave Sen. Harris any such forbearance.

And while we're on the subject of grace, Sen. Harris has given EVERYBODY the correct pronunciation of her name, which is Comma-la. You may also jokingly refer to her as Mamala, which means you should have no issues, K? 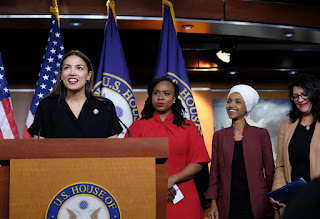 2. Congresswoman Alexandria Ocasio-Cortez - Look, AOC is her Twitter name, not how anyone other than her BBFs from the Squad ought to be referring to her. I know, having to show respect for a young Latina who isn't cleaning your toilets or nannying your kids is different for a lot of you, but get used to it. And yes, you need to refer to every woman elected to Congress by her respective title.

3. Madame Speaker Nancy Pelosi - Especially among all of you who were raised in Catholic school, you KNOW better than to get too familiar. And you ought to be ashamed of yourselves for even deigning to consider that you have the right to speak to a woman from Baltimore who has raised five children in that manner...do you kiss your mother with that mouth?

4. Governor Gretchen Whitmer - Y'all have really lost your ever-loving minds here. Mad because she did her job in the interest of public safety? First you storm the State Capitol, then you hatch a plot to kidnap her? Because of face masks? This woman has a closet full of leather jackets...does she look like she's scared? Y'all better fall back!

5. First Lady Michelle Obama - Do not get it twisted. We call her our Forever First Lady because that is what she is. PeriodT. We also extend the same courtesy to former First Ladies Rosalynn Carter and Laura Bush because that is appropriate. And despite the jokes we have for the current title holder, First Lady Melania Antoinette deserves to be addressed properly as well.

6. Madam Secretary Hillary Rodham Clinton - This is where things get a little confusing, since she has an assortment of current and former titles from which to choose (First Lady, Senator). We have settled on this one because it acknowledges her highest attained position and affords her the respect of being an independent woman of tremendous accomplishment, and who still lives rent-free in the head of the man she beat by 3 million popular votes.

7. Dr. Jill Biden - Until such time as she receives an upgrade...

8. Duchess Meghan of Sussex - Y'all are going to get used to having a Black woman in the Royal line up. Despite your calls for her to renounce or be stripped of her title, she doesn't answer to the curdled cream of British society. And just so that we're all clear, the relocation of the Sussex Royals to the US was a decision made to keep Prince Harry from whooping ass, because he is a real one and we all know that neither Prince Charles or William would ever.

9. Chancellor Angela Merkel, Leader of the Free World - Because let's face it, the U.S. can't even conduct an election anymore, let alone lead the rest of the world in any capacity.

10. Every Woman - You should have learned this as children, but somehow you forgot that when you are speaking to any grown woman, the appropriate way of addressing her is Ms. until such time that she grants you permission to use her first name, instructs you to use her married name, or offers another means of appropriate address such as Reverend, Doctor, Mother, Sister/Soror, or whatever military rank or nickname is appropriate. Some of you have gotten way too familiar and I don't like it. Now that people are taking great pains to identify by their chosen pronouns, that should clear up ambiguity, particularly in written communication.

It has become apparent that a lot of people think nothing of diminishing accomplished women by addressing them informally or outside of their names. Chief among them has been the current Commander in Chief, who has used his bully pulpit and Twitter fingers to disrespect any woman who stands up to him. This is a pattern that was established when he called Secretary Clinton a nasty woman back in 2016, and he went on to hurl that same insult at Speaker Pelosi, Mayor Carmen Yulin Cruz of San Juan, Danish Prime Minister Mette Frederiksen, and even Duchess Meghan. For certain women, his disdain has gone much further, as was the case for former aide Omarosa Manigault Newman (that dog), Rep. Frederica Wilson (wacky), Rep. Maxine Waters (low I.Q.), journalist April Ryan (loser), journalist Abby Phillip (stupid), and now Sen. Kamala Harris (that monster).

Apparently, the sight of an accomplished Black woman who can hold her own on the national stage was too much. It is the exact opposite of how Vice President Pence treated her, which to his credit was as an equal (given that they are constitutional colleagues in the Senate). I won't even waste my time in deconstructing Presidential man-baby tantrums and taunts because we already know what his problem is, which is the same problem this dude had until FOX News solved it by firing him.

The fact that nearly every other first-world nation has elected a woman to serve as Head of State except for the United States is why this primer was necessary--to ensure that everyone was briefed on protocol. Women will break that glass ceiling, and those who are too slow to move with the times will get hit by the falling chards. It will become the norm to see more women in positions of authority and influence, and men will have to deal with it, just like they got used to women coaching in the NFL or hosting the evening news in primetime. I know that we haven't reached the summit yet, but it is in sight and the fact that the mere prospect of progress is intimidating to the guardians of patriarchy...checkmate.

Posted by Ayanna Damali at 7:25 PM