Senator Lindsey Graham (R-SC) told Black South Carolinians that they can go wherever they want in the state if they are conservative, and it has generated all kinds of interesting responses. Mine won't be much different than this popular meme: 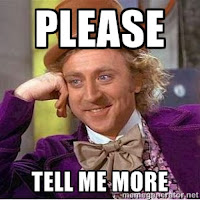 Thank you, Lindsey Graham, for telling Black (and by extension Latinx, Asian American, and Indigenous) people that in South Carolina, we still cannot traverse political territory that has not been previously approved without the appropriate credentials. I know that isn't what you said, but it is what you implied (here is what you said) and you need to own what you meant by what you said. You need to own it because the best examples of your words are Exhibits A (ex-Governor Nikki Haley) and B (Senator Tim Scott): 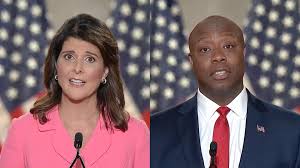 And it isn't lost on anyone that your revelation of South Carolina being a sundown state came at the end of a debate with Jaime Harrison, the Black guy who is challenging you for your seat. In essence, you were igniting a little cross as a signal to your supporters that here is one of these uppity Negroes who doesn't know his place. How Strom Thurmondly of you.

I know, this is going to get under your skin because you definitely did not mean it the way I am interpreting it (even though it is what you said) and I am taking you at your word...so what did you mean Senator? Because if you wanted to dispel the idea of structural and systematic racism still at work in South Carolina, there were plenty of other things you could have said. 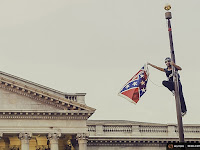 For example, you could have mentioned the fact that South Carolina finally got rid of the Confederate flag in 2015 after activist Bree Newsome scaled a flagpole to take it down. I know that the official decree was to remove the flag as a symbolic act of compassion after the massacre at Emanuel AME in Charleston, and you could have invoked that too. And it would have been a great side-note to add how the terrorist who committed that heinous crime is now on death row instead of interning at your office.

You could have mentioned all of the great Black South Carolinians who have made the state proud, such as astronaut Ronald E. McNair, actors Chadwick Boseman and Viola Davis, boxer Joe Frazier, jazz trumpeter Dizzie Gillespie, educator Mary McLeod Bethune, politician Robert Smalls, and my favorite TODAY Show anchorman Craig Melvin. In a gesture of bipartisanship, you could have mentioned Rep. Jim Clyburn and the Rev. Jesse Jackson as prominent sons of the Palmetto State. You could have talked about your two HBCUs, Claflin University and South Carolina State University.

Instead, you decided that your one last shot at keeping your job was to reveal the truth that you didn't think Black people already knew about politics and life in general--we can only ascend as high as white folks allow. (Trust, it happens on the other side of the political spectrum too, but they do a better job of not saying it out loud...although the Clintons came close and got rebuked by your fellow South Carolinian Jim Clyburn back in 2008.)

As my Daddy says, white folks in the South don't like it when Black folks get too big (in the North, they don't like it when we get too close). Either way, y'all prefer knowing where we are at all times, and Black people with too much power threaten your worldview. That's why all of these instances of us occupying non-traditional spaces, i.e., jogging in suburban neighborhoods, bird-watching in Central Park, using guns in self-defense of our homes, running for Senate in a toss-up contest in South Carolina, etc., has y'all risking COVID to set things straight. 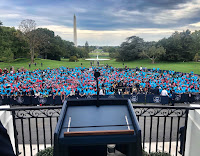 Speaking of which, let's discuss this little gathering at the White House -->

So what in the Herman Cain were these people doing at Ground Zero, the nucleus of the highest coronavirus spike in DC since early August? At least most of them wore masks, but really, is there anything this DESPOTUS has to say that is worth this kind of risk? I know it was a job and times are tight, but seriously.

And no, Candace Owens doesn't deserve credit for leading lambs to the slaughter. She bribed those people with a free trip to DC, and even if some of them came on their own dime, she still should have thought better of hosting a rally for Black conservatives at the White House less than a week after the COVID King was released from the hospital. For someone who is allegedly pro-life and pregnant...yeah, stop trying to make Blexit happen.

But this is exactly what Graham meant. We can only enter certain restricted spaces if we can recite chapter and verse every talking point that has been written about the benevolence of the good white people in power. Apparently, South Carolina politics are no different than gaining access to the White House these days, which has reverted to being a country club since the current Occupant moved in. Invitations to Black people have become rare since he no longer hosts championship sports teams or popular artists not named Kanye.

Back to Lindsey Graham, who might either win by the skin of his teeth or lose in an historic upset. It has been past time that some bold soul channeled the courage of our ancestors and issued a direct challenge to the conventional order of the Old South. We have just as much right to political power in South Carolina as we do anywhere else in this country. We've already stormed The Citadel, Bree Newsome retired the flag, and Jaime Harrison is not throwing away his shot. It's 2020, and everything is possible. 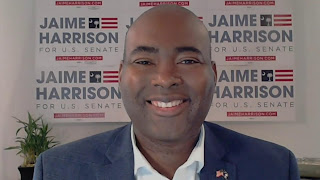 Posted by Ayanna Damali at 3:54 PM