Maya Angelou once said that when people show you who they are, believe them. Believe them because if they got comfortable enough to show you their naked personal truth (Jeffrey Toobin), then you know all you need to know and can now respond accordingly. 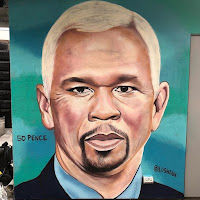 In this case, two weeks before the Apocolypse, we have been given some valuable insight into the characters of several well-known men. We have been told by Robert Johnson, the founder of BET, that he prefers the devil he knows to the devil he doesn't. We have been advised by Rev. Fred Price, Jr. that Christians should abstain from voting between the lesser of two evils. Now that his children are mostly grown and he's too old to be dancing in the background of music videos, Diddy needs something constructive to do. We learned that O'Shea 'Ice Cube' Jackson has proposed a Contract with Black America, which is being touted as part of a Platinum Plan, not to be confused with any other platinum delicacies he once sold. Formerly respected economist Dr. Boyce Watkins applauds Cube's efforts, along with that other public intellectual heavyweight and author of The Art of Mackin, Tariq Nasheed. Now that Curtis 'Half Dollar' Jackson has indicated his support for the current Regime, we're just waiting on Dr. Umar Johnson to tell us when his school is opening.

I don't want to hear another person tell me that they can separate the con from the artist. I don't want to hear that being rich and successful equals intelligence. I don't care that occasionally some of these brothers have said something insightful because we all know that even broken clocks are right twice a day. Now YOU know who they are.

Four years ago a well-known public intellectual suggested that Black people could forgo voting for President in favor of down-ballot races. He assumed that Hillary Clinton would prevail, so he argued that the real struggle for racial justice should be fought on the local level. Even though he was half right, that brother is still apologizing for his lapse in judgment. Meanwhile, these dudes... 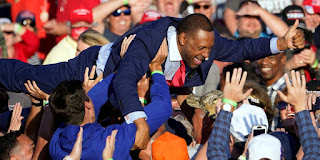 I'm not sure if I should waste the effort in even addressing it, but it needs to be said for those who have yet to believe me when I tell you that some Black people who claim to love us do so until they don't. Actually, I have usually said that in the context of sexism, which I believe is also at play here (with respect to the timing, and I will get back to that), but for the sake of keeping it real, it applies in the broader context as well. As some wise elder in your family has said all of your life, all of our skinfolks ain't kinfolks.

I am not questioning their Blackness. I am not doubting that these dudes thought long and hard before taking what they believe are lucrative political stands for the culture. We all have that friend who is always starting a new business and talking big about the good it will do for the community. Then after getting your money, they ghost you until the next time they need something. Out of politeness, you never ask for an accounting of their last venture, but because you know better, your decision to pass on investing in their latest scheme then becomes the basis for them gaslighting you about not being down.

For example, Dr. Umar has been talking about building a school since the early days of Twitter. He's been filming video fundraising appeals and trying to shame folks into investing in his dream. But has anybody ever wondered why it is still a grassroots effort? Why is this dude building a school when he could have bought two with the money he's already swindled collected?

There there is Curtis 'Five Dimes' Jackson. Remember he came on the scene bragging about how he survived being shot nine times and nobody ever asked to see the bullet holes. But it fit the persona, and he's been nothing but a relentless nasty troll for the past 20 years (makes sense, right). So of course, he aligns with the Troll King, beefing with folks just for the hell of it, not giving a damn about the harm inflicted on others. All because his Ten Nickels azz doesn't want to pay more in taxes.

Earlier this year, I was complimentary to BET, but let's clarify that the niceties do not extend to Robert Johnson, its founder. I peeped his game years ago when he determined that being woke wasn't as profitable as being ratchet. Because he is a businessman first, so his primary goal is to make money, not be some kind of upstanding citizen. And as one of the first Black billionaires, what do we expect from him, integrity?

O'Shea 'Ice Cube' Jackson had the bright idea to promote a Contract with Black America, something that you might have remembered from its previous incarnation when former NPR/PBS host Tavis Smiley authored a similar pact in the early 2000s. Smiley's Contract got cancelled...so perhaps it was time for a new one. And who better than a reformed gangsta rapper who now makes kid movies? Like any other informed American citizen, Cube has every right to plagiarize the work of others, put his government name on it, and then go on a PR media blitz to tout his access to those in power. At least he set the record straight with Chris Cuomo that he didn't go when summoned to the White House for a fake photo.

The rest are a bunch of old school hoteps who hate Black women. Of course that isn't how they see it, but how else to describe the barbershop of bitter old men who built up their social media notoriety by defending sexual predators and bashing outspoken and successful Black women? Why should Bill Cosby rot in jail while Harvey Weinstein awaits trial? Mad that there was a documentary about R. Kelly, but not as mad that he urinated on a child and married Aaliyah when she was 15. Offended that a Black woman is in line to become the Vice President because her husband is...white?

Tell me something Judge Joe Brown, are you that salty that Judge Judy is still on TV while you are peddling conspiracy theories on YouTube? Still in your feelings, Dr. Boyce Watkins, that when you tried to holler at Kamala Harris at Howard's Homecoming, she snubbed you? Pimpin' ain't easy, so is that why you hate smart Black women who can see through your latest hustle Tariq Nasheed? I am pretty sure Rev. Fred Price, Jr. that Jesus will not be as understanding in judging those who wouldn't choose between the guy who tear-gassed protestors so that he could wave an upside-down Bible in front a church, or the boring guy who doesn't hate the gays.

What have any of these dudes done for the culture other than monetize it for their own ends? We came of age in a moment of consciousness in the early 90s, and as one of my astute friends connected some of the dots back to when hip hop did a 180-degree turn towards vulgarity, it was then that we got hoodwinked, bamboozled, led astray, run amok. Here we are on the verge of disaster and some of these same jokers--purveyors of misogyny and cannibal capitalism who aligned themselves with power instead of progress are doing what they have always done. In the words of Two Quarters, they will get rich or die trying.

Meanwhile, other Black billionaires are using their wealth to bless future generations. Lebron James' school is up and running. There are Black artists who are still conscious and woke and using their talents for good. Some of these old farts who are riffing on Black women that marry outside of the race weren't even checking for these sisters because they were too smart and don't fix plates for man-babies. What causes do these dudes advocate, who are they mentoring, and are they patronizing Black businesses or supporting HBCUs? Two weeks before the end of days, nearly 220k thousand deaths from COVID-19, and Ice Cube is proud that he got us Juneteenth off next year.

See how their true colors are shining through?

Posted by Ayanna Damali at 6:55 AM