Girl, Take Those Posters Down

I don't know who needs to read this, but that faded poster on your childhood bedroom wall should probably come down, especially if it is a picture of some old 80s heartthrob. He doesn't even look like that anymore, and if he does that is a LOT of surgery. Or he might be dead, in which case, you can keep one poster up as a shrine...but that is kind of weird now that we're grown and have children and/or grandchildren who are now postering their bedroom walls.

Just take 'em down, he's not the man you thought he was (because he was a teenager, just like we were). Or maybe he is, and if that is the case, you can stop reading now because I am not going to say anything nice from this point on.

Not that anybody needed to know his political leanings, but Rick Schroder falls into that latter category. I used to watch Silver Spoons as a child, and as recently as this year at some point during this pandemic, I have seen a handful of episodes. Including the Whitney Houston episode that we all forgot about because who paid any attention to Alfonso's uncle Dexter? Anyway, we all learned that Schroder has become one of those guys who trolls people from his mother's basement.

And in support of another basement-dweller who got his Mom to drive him across state lines to assist the police with crowd control in Kenosha, Schroder donated bail money to Kyle Rittenhouse. Because patriotism...

I didn't need to know that. Mind you, Schroder was never on any poster in my bedroom, nor did I ever consider him to be anything other than kind of cute in a Buster Brown/Richie Rich sort of way, still I DID NOT NEED TO KNOW THIS. I did not need to know that Rick Schroeder thinks that a child who gets his kicks pretending to be Terminator 2, deserves to be at home eating green bean casserole at Thanksgiving dinner! Meanwhile the families of the two people he killed...

Gimme a Break! (Yeah, that was Joey Lawrence.)

Similarly, it is past time to let go of Scott Baio. I never watched a single episode of Joanie Loves Chachi (was this really the theme song?) and I don't care, but whut??? I know what you're thinking, Baio had range beyond Chachi--he became big enough to star in another sitcom for six years, the ever under-rated Charles in Charge. But let's be honest, nobody remembers much about that show other than the theme song, Willie Aames, and the fact that Nicole Eggert accused Baio of sexual molestation during her stint. Nicole Eggert would later go on to run along the beaches of Malibu with The Hoff on Baywatch, so if Grandpa Night Rider is still on your wall, I am judging you. As for Willie Aames, who like Baio had a stint of hunkdom in the 70s (residue from Eight Is Enough), he's had a rough life, so you can leave his poster in place.

Take the others down though. Schroder, Baio, and your Grandmother's calendar of Jon Voight as Conrack too. Not because these guys are old. The late great Sean Connery, our eternal James Bond, even he proved to be a wee bit problematic. Despite the fact that we moved on and vowed never to speak of it again, never forget that he gave a most fucked up interview to Barbara Walters in which he declared it was acceptable to slap women.

Teen idols and heartthrobs are human just like star athletes, hip hop artists, hard rockers, and Sexiest Men Alive. Aging is the least of their problems. I am talking about the disillusionment that comes from learning that they might be terrible human beings.

Everyone is entitled to have political opinions and so this isn't about Schroder being in that clique of Hollywood conservatives. Kelsey Grammar, Drew Carey, Kirstie Alley, Dean Cain, and Melissa Joan Hart are a few of the names we know, and there are plenty of others. We know that a lot of professional athletes are conservative, as well as most of your favorite televangelists. Most of the big box stores where you shop are run by conservatives. That one relative who insists that everything will be fine, just come over for dinner this Thursday at 4pm...yep. More than 70 million people voted to keep the Creep Show going for another four years, and they don't all look like this: 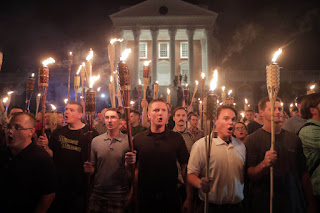 Until this century, I was fine with not caring about the political ideologies of every entertainer on the planet. Now it feels like a prerequisite, that I must know how they voted (if they voted) in order to decide if their projects are worth my energy. As such, it is unlikely that I will ever sit through a marathon of Veronica's Closet now. But what about Cheers, Frasier, Look Who's Talking? See how that can become a slippery slope with ensemble casts???

I'm joking, by the way, but these are strange times. And I am pretty clear that Rick Schroder could have thought of a better way to draw attention to himself other than to join forces with the My Pillow guy in supporting a domestic terrorist. What, no food banks or domestic violence shelters that were more deserving?

However, it is rather coincidental that many of these folks were TV stars in the 80s. I posted some observations on Twitter about a few of the sitcoms from that era and how it is obvious that most of those shows had no diversity in their writers' rooms. The very people who complain of tokenism as a displacement for them had no problems using it as a device to disprove the existence of racism. For example, why did Ricky Stratton suddenly gain a Black best friend? Was it really because he was a cool kid or because the writers were trying to cover up for the fact that Schroder had Jason Bateman booted off the show...

So maybe we've known all along that Schroder was trash and I just forgot. My bad.