Will You Please Go Now!

Growing up, my favorite story books often came from our home collection of Dr. Seuss books. My parents were very serious about reading to us before bed, and we had our choice among a selection of Dr. Seuss, Berenstain Bears, Little Golden Books, African folk tales, and whatever else my paternal grandparents had saved from my Dad's childhood. My parents saved all of our children's books too, and several years ago, I brought a box to my house for reading to my young cousin. We have a few still in decent enough condition to read to our daughter, so we're talking about some books that are at least 45 years old! Luckily, we have many new favorites thanks to Dolly Parton's Imagination Library, which also includes a diverse collection of stories from various children's authors.

But there is nothing like a classic Dr. Seuss book, so every now and then, I slip one of my old favorites into the Kid's nighttime reading rotation. In fact, I think I will organize a rally of parents to gather every night at the White House to read this bedtime story for the current occupant, Donald J. Trump from now until January 20, 2021.
Donald J. Trump, we don't care how,
but Donald J. Trump will you please go NOW!

These next few weeks are going to be exhausting if his current pattern of obstinance holds. He hasn't conceded the Election because votes are still being counted and perhaps his campaign is holding out hope for a miracle. To facilitate his pipe dream of holding on to this job for life, he has dispatched teams of lawyers to file lawsuits challenging the results in a few swing states where he assumed he'd win. Specifically Pennsylvania, where I was stationed as a poll watcher, but also Michigan, Arizona, Georgia, and Nevada. At present, he has lost the popular vote by 6 million and counting (which is double his previous loss in 2016). He had been hanging his hopes on another default win in the Electoral College, which is why the final vote tallies in those particular states are being challenged.

The basis of these challenges are the unfounded accusations of voter fraud in Detroit, Phoenix, Atlanta, Las Vegas, and Philadelphia. Not the suburbs, the exurbs, or the rural counties, but the cities where there are primarily voters of color. In other words, Black, Latinx, and Indigenous people are so desperate to get rid of the DESPOTUS that we would cheat.

In the words of President-elect Joe Biden, C'mon Man! We don't need to cheat to express our disdain for Trumpelthinskin. Nah. We just voted as if our very lives were on the line. Which, thanks to his continued incompetence in getting a handle on the coronavirus, our lives are on the line. Thanks to his racist rhetoric and xenophobia and anti-immigrant policies and his lies over the last four years, we don't need to cheat. The great Marian Wright Edelman offers a metaphor that illustrates how powerful we can be: imagine a large, menacing dog...then consider what would happen if enough fleas attack that dog.

So you underestimated us, Sir. You thought that your Platinum Plan and the endorsement by Lil Wayne would be enough to sway younger Black voters. Your inroads into the Latinx communities did catch us off guard, but thankfully enough of them didn't get drunk on the Trump kool-aid wine. I'm pretty sure you assumed Indigenous people can't vote in US elections, for if you had known otherwise, you might have attempted some last minute, thrown together, yet comprehensive three-page plan and sent Don Jr. to promote it. Or maybe you were confused and thought it was a rally for Indian Americans, but I heard the Asian American vote also went blue.

When all else fails, when your lies fall short, and people are not persuaded by divisive scare tactics, then accuse us of stealing the election (how's that for racist irony). Make every specious argument to sow the seeds of doubt that something went awry, and refuse to accept that 76 million people (and counting) were motivated to turn the tables and say in unison:

Sure, if anyone really wants to comb through piles of crap evidence to prove rampant voter fraud, have at it. We've got a socially distant Inauguration to plan. We're buying sage bundles in bulk. We're stockpiling all of the Clorox wipes and cans of Lysol spray we can find to disinfect the place for Uncle Joe. We'll reserve a U-Haul and will pay to gas up Air Force Six for a one-way trip to Mar-a-Lago or Russia or North Korea. We'll even let Faux-Five brag that his Inauguration crowd was bigger than Biden's, but I'm guessing folks will brave the cold, the 'rona, and even the dozens of counter-protestors just to make sure that come January 20, 2021 at noon, we will be rid of Donald J. Trump: 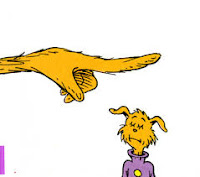 You can go out in handcuffs, a perp walk (if you insist),
It's what you deserve for all of this Hell
Biden won't pardon you, you're headed to jail.
Donald J. Trump, don't you know
You lost the election, you must go go go!
Get on your way, please Donald J.
Don't get it twisted, we don't want you to stay
We're over your bluster and racist schitck
Enough of your whining, you sexist prick
You can go in your trump boat or in your trump jet
We don't care where you go, just get!
Take your wives and your children, you have until noon
The 20th of January, Donald, will be here soon! 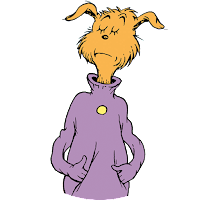 Donald J. Trump, we don't care how
Donald J. Trump, will you please go now!
We said go and go we meant!
The People have spoken,
You're out of our government!
(adapted from Marvin K. Mooney © 1972, Dr. Seuss)
Posted by Ayanna Damali at 2:58 PM