Of Malice and Men

Candace Owens sure does say a lot of absurd stuff to get attention. I sure do wish I could drag someone else every now and then...but in the words of the late Hyman Roth, this is the business I have chosen. And she is about to get this work!

Candy Land must have been bored from reading the same conspiracy tweets on Parler about how the election was fixed, so she decided to look for something new to get her heart rate up. So I'm guessing she took a stroll down to Starbucks to get her usual pumpkin spice latte when she spotted Harry Styles in a dress on the cover of VOGUE displayed prominently on a nearby newsstand. And because he looked so darn pretty in his fancy frock, I think Candy Stripe got jealous. So she clutched her pearls, forgot her drink (but she doesn't tip, so no one called after her), and hurried back home to pull out her snooty little typewriter to fire off this ridiculous tweet. Instead of asking the obvious question (is that really Gucci), she opined that this pictorial was all part of the leftist agenda to emasculate men.

Bring back manly men, she pleaded, then hit send. Whew...girl, you make this too easy:

1. Nobody, and I mean, NOBODY who reads VOGUE Magazine cares that Harry Styles is wearing a dress. And it is pretty obvious he was chosen to don frocks to please both the ladies and the gentlemen who do read VOGUE...so none of them will be complaining.

2. Harry Styles ain't checking for you, boo. He's not checking for me either, but that's okay because I don't need to add Busy Black Cougar-Mama to my resume.

3. I thought you were married and pregnant. That doesn't prevent you from looking, by the way, but I'm just checking to make sure all is okay at home.

4. Because you are pregnant and are about to bring forth life into this crazy, mixed-up world, wouldn't it be better for your child not to be branded as the kid whose Mommy says unnecessary, ridiculous shit just to get attention?

5. Then you followed up by doubling down (of course). Seeing that your first tweet went viral, you added more fuel to the fire by taking a swipe at fake feminism as toxic. But going out of your way to say something mean about someone else isn't toxic, Candy Cane?

6. As this is a polarized world, people have taken predictable sides, and even though this doesn't really have to be a debate, it is what it is. So I guess this means that you are one of those bitter bitties who believes that the design of a seasonal, disposable coffee cup is also proof of the leftist plot to destroy America.

7. Just wondering why you were trolling through VOGUE for something get outraged about...if you're such a serious person with no fashion sense (and that is not a question), then why do you even care what fills their pages? Fashion is a billion dollar job-creator...

8. Oh, I see now, you were taking a break from beating that dead horse, known as complaining about election rigging. Sigh...allow me to break this down: there is a pandemic raging, some states gave their citizens the option to vote by mail, and more of the people who chose to vote by mail preferred the guy who actually has a plan to help bring an end to the pandemic. Yeah, it sucks to lose to the guy who campaigned from his basement instead of flying around the country to spread the very disease that has been killing people.

9. I don't know why you are so fixated on the superficialities of gender as defined by attire. I know that someone sent you a bunch of pictures of men in dresses and you insisted they weren't persuasive, so I am just going to leave this right here: 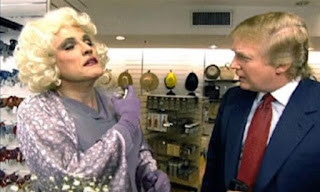 10. As usual, you are entitled to your opinion, even if what you expressed was done with malice and with utter disregard to the harm that it could cause others. I am no longer joking, Lil Sis, because what you said was terrible.

Let's start with the fact that I believe you are much smarter than this. You know that manhood and masculinity are not superficial attributes. The characteristics that define manhood are so much more than a shirt and tie, bulging muscles, a ten gallon cowboy hat, or a pickup truck. I know what you said and how you meant it, and what's sad is that you know better. You know better than to reduce manhood to a bunch of tropes and to use Twitter to call someone else's manhood into question.

You know the stories of Black men who were dehumanized and physically stripped of their manhood--men who were castrated right before their bodies were set ablaze in front of jeering mobs. Men who were never afforded due process, but who were judged and punished on the mere allegation that they exceeded the bounds of manhood that had been proscribed for them. Men who had gotten too uppity by owning property or getting an education or daring to vote; men who wore this country's uniform and assumed that granted them equality; men who did not resist the charms of the forbidden fruit of white womanhood offered to them. So you know better than to say something in public that could cause someone real physical harm.

You know better than to assert that there is something less or diminishing about a person who moves about the world differently than others. You know how painful it is to be rejected and marginalized and ridiculed. You know what it is like to choose to live against the grain and to endure the consequences of that choice. You know this, and yet you said what you said, it went viral, then you felt vindicated because other small-minded people agreed with your pettiness.

He is your standard bearer? Or is it that you prefer the image of manhood he projects--the illusion of strength without any of the attributes.

Real men that know who they are and are unafraid to live in their truth are manly, Candolences. And real people love them for that. And it doesn't matter what a fake pundit clutching fake pearls tweets to express her faux outrage over something that she could have just ignored.

Posted by Ayanna Damali at 1:28 PM