History Has Its Eye On You

In the summer of 2019, my parents traveled with us to Maryland's Eastern Shore. We drove through Cambridge, the location of the Harriet Tubman Underground Railroad Byway, where there are several scenic sites that were significant during her enslavement. We've driven through this city many times, stopped for gas, and gotten something to eat. I suggested that we make a special visit to the historic site with my parents since this would probably be the only chance they would get to see it. 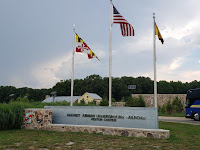 Since there are several points of interest along the byway, we visited the Visitor's Center which opened in 2017 and is operated by the National Park Service. That meant that we were headed to an out of the way, off the main road attraction, and we drove for several miles past fields and farms. My Dad commented that everything looked as if it had not changed in about 50 years, and as we continued into the void of bad cell phone reception, it definitely felt as if we were traveling back in time.

In recent years, the Eastern Shore has embraced its history as the location where both Tubman and fellow Marylander, Frederick Douglass, were born and enslaved several miles away in Talbot County. Tour buses full of eager visitors were lined up in the parking lot. Yet, in the towns and cities along this same stretch of highway, there are plenty of Trump signs, a few Confederate flags, and in the town of Easton where Douglass was born, a monument dedicated to the Talbot Boys stands on the grounds of the courthouse. 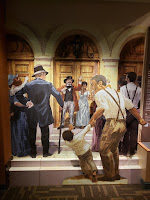 Once inside the Visitor's Center, we saw a mock up of the recently abandoned federal effort to re-design the twenty dollar bill. We saw the letter that Douglass had sent to encourage and applaud Tubman's bravery. We saw various artistic renderings of Tubman, including a portrait of Tubman re-imagined as the Statue of Liberty. In the exhibition area, I was drawn to a mural that depicted scenes in Tubman's enslaved life. One scene in particular struck a chord for me:

I had made this association in my head many times, but seeing it in a life-sized full color rendering gave me the chills...family separation on the slave auction block is no different than family separation at our Southern border. Or when Indigenous children were 'adopted' from their families. Or when we see those black and white images of fire hoses and dogs unleashed on protesting children. Or when police dressed in riot gear fire tear gas cannons on urban protestors. We have seen this evil many, many times before.

Someone will read that and accuse me of hyperbole. They will offer a justification for every single example--how children brought to this country illegally don't have any rights that we are bound to respect (which should sound familiar to those of us who studied the opinion written about the rights of Black people by another Marylander, Chief Justice Roger B. Taney in the infamous Dred Scott case). That fire hoses, dogs, tear gas, pepper spray, and riot gear were/are all needed to maintain law and order. That removing indigenous children from their families offered them a chance at a better life, and that they were well cared for in those adoptive homes, just as those 545 children will be better off in America...if they aren't deported.

None of this is new, as there are historic parallels to many modern atrocities and absurdities. When this Regime fought to keep the number of undocumented immigrants out of the official Census tallies, Black people remembered when we were counted as three-fifths and that Native Americans were excluded entirely. When the DESPOTUS boasts that he has been the greatest benefactor to HBCUs, we think of all the benevolent white philanthropists whose names are etched in stone on the buildings they dedicated on many of our campuses. We think of Julius Rosenwald, who was both a real millionaire and philanthropist, whom we know this President will claim that he doesn't know and never heard of. Likewise for another Republican Sen. Justin Smith Morrill, who wrote the Second Morrill Land Grant Act of 1890 that actually created public HBCUs.

So when trust fund pundits like Jared Kushner suggests that Black people don't want the success his father-in-law offers, that is just another way of calling us stupid and lazy (a common refrain ever since we stopped picking cotton for free). When he trots out their Black best friends (BFFs): Kanye West, Lil' Wayne, Diamond and Silk, Herschel Walker, Candace Owens, and the rest of the prosperity preacher-pimps, and our eyes collectively roll, it is because we aren't entertained by blackface. Then they act astounded that we aren't more gracious.

I started this piece more than a week ago. It was supposed to be one of my closing arguments, but I got busy and anxious and focused on other matters, namely my day trip to Philadelphia where I had signed up to be a poll monitor. Now that the election is over and votes are still being counted, I am not sure how I feel about anything right now...(well, yeah now I do since we have a declared winner, but I will address that in a separate piece)

I know that the way forward is uncertain, and perhaps if I were a better student of history, I would be able to cite another example of racist evil to demonstrate how history repeats itself, and how maybe this isn't just about the possibility of four more years of this Administration. There are people in this world who live under corrupt governments for a lifetime. At least we get a chance to change course. So instead of American history, I am being drawn to the Bible and the stories of Jewish occupation. The people of Israel found themselves in captivity numerous times, which is why half of the Bible consist of stories about deliverance. Keeping the faith. Holding out hope for a Savior.

If I were a preacher, this would be the part of the sermon where I lose folks by challenging them to question conventional wisdom. The foundation of our faith is the Resurrection. But before that triumph, Jesus had to die by the edict of a foreign enemy (Romans), engineered by the corrupt leadership of his people (Pharisees). So if our hope, as the song says, is built on nothing less than Jesus' blood and righteousness...then we should already know that moral goodness alone is never enough. It always costs blood, toil, and sacrifice. Thus, in order to topple Trumpism and to dismantle other systems of oppression, those words need to be more to us than just verses in an old hymn. In moments like this, we need to ask ourselves where have we built our hope?

Reflecting back on that visit to the Harriet Tubman site, those images that were supposed to be unfamiliar to me in modern times haunt me. I heard the anguished wails of enslaved children in my soul as clearly as I heard the cries of immigrant children from cages in real time. Yet, we proclaim that scenes like that don't represent who WE are as Americans, as if we have evolved beyond basic human brutality and cruelty. If anything, Americans are quintessentially human, flawed like everyone else on the planet. We are Cain and Abel, Pharisee and Zealot, undoubtedly good and ruthlessly evil. 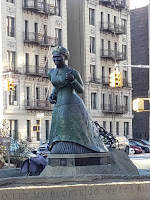 Slavery persisted in this country for 400 years. It didn't suddenly become morally wrong because a few of us escaped and shared the horror stories. As long as there was a benefit derived from the exploitation of enslaved labor, there was no amount of righteous indignation sufficient to abolish it. Folks are still debating whether this peculiar institution was the catalyst for the Civil War and whether the effort was some noble Lost Cause crusade. Regardless, slavery was replaced by other forms of exploitative enforced labor (convict leasing, sharecropping, migrant farm work, gig employment) and Jim Crow segregation which only ended 50 years ago. The fact that we now laud Harriet Tubman and Frederick Douglass but still debate what to do with the public monuments erected to honor the men who died to keep them in bondage informs this present moment.

Of course this election is/was this close. Of course we find ourselves caught between the better angels of our nature and the worser spirits of despair. It is easier to claim an anonymous space in the crowd, to disavow direct responsibility for the actions of others. You did not imprison those children, but did you look away? You didn't march at Charlottesville or in Ferguson, but on which side of the street would you have stood? Are you more ashamed that the truth makes some of your heroes look bad than you are of the lashes, the welts, the scars, the brands, the strange fruit, the lingering wounds that they inflicted? Would you take the time to venture down a back road or to the other side of the tracks to visit an obscure museum dedicated to a formerly enslaved woman? Or would you rather visit the historical landmarks on prominent display that were built on stolen land? When did this American experiment begin, in 1492, in 1619, or in 1776--take your pick, but know that no executive order is powerful enough to outlaw the facts.

America, History has its eye on you...

Posted by Ayanna Damali at 6:54 AM