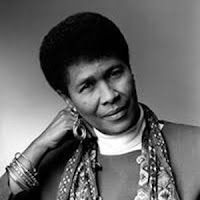 I have often mentioned my Images of Women in the Media Class, and I wanted to draw attention to it and my professor, Dr. Gloria Wade Gayles, in this transition period between Black History and Women's History Months. I had the pleasure of being her student for three classes during my tenure at Spelman. The funny thing is, I need to consult my transcript to recall the names of those other two courses, but I know they had something to do with African American literature and women. I still have the books for all three, including that Images course, long out of print and outdated, because that is how impactful it had been.

I have her memoir, but in my immediate vicinity I have her book of poetry, Anointed to Fly (1991), on my bookshelf and re-read two of her seminal works to reflect on her profound influence. The poem from which the book takes its title is the poem she read to us in chapel in my earliest days at Spelman. I am unsure if it was our very first convocation or if it was part of freshman orientation, but I sat there completely radicalized by these words (emphasis mine):

you are the
daughters of women
who dipped you whole
in the waters of promise.
You have no achilles heels.

I don't remember if she read this other poem to us, "And the Women Gathered", or if I first heard it as a performance piece:

THE WOMEN GATHERED
as one constellation.

and the world took notice
that women are warriors
(always have been,
even in the beginning)

However, what I recall was that it was the first time that I heard within my heart and soul that I was in a space that would build me up as a Black woman. I should have know that going in, but for whatever reason, my expectations about what my experience at Spelman would be were clarified and affirmed by her words. I resolved to take whatever classes she taught so that I could glean more of her wisdom and confidence. It took two years before the opportunity came. In the meantime, there were others who prepared us, namely my Advanced Writing professor, who taught us why red ink was a necessity in training young writers...

On the first day of class, Dr. Gayles rushed into the room with an armful of paper and books, and the first words out of her mouth were an admonishment--CLAIM YOUR SPACE! For some reason, I imagine that she shook her fists at us whenever she said this. Over the next two years, I would be reminded of that important duty, which would carry with me to law school and every subsequent milestone on this journey through life. As I am in this current space of re-evaluation and reflection, I am taking some time to acknowledge just how profound her words have been and will be as I seek to reclaim old spaces and inhabit new ones. If you ever get to see this, Dr. Gayles, my gratitude transcends mere words.

Furthermore, I thought of her in response to current events where women have been subjected to standards that seek to dis-empower or diminish their accomplishments. The last four years reaffirmed, in case we thought otherwise, just how ingrained and intractable sexism can be--when every outspoken woman became nasty in the parlance of a certain former White House Occupant. None of that has gone away with his departure; it has been reinvented in the form of unnecessary scrutiny, hypocrisy, double-speak, and other more sinister and subtle criticisms. For example, two Texas Southern Baptist pastors made headlines for calling Vice President Kamala Harris out of her name. For voting her conscience, Congresswoman Liz Cheney (R-WY) has been censured and attacked by members of her own party. Some Senators went out of their way to oppose the historic nomination of Congresswoman Deb Haaland (D-NM) over points of personal ideology instead of her qualifications for the job.

We get the subtext. These women have no business in these spaces. Harris didn't ascend to the Vice Presidency because she worked and campaigned for it (which she did), but because she had one high-profile romantic entanglement years ago. Yet no one has dared to insinuate that her husband was unqualified for a distinguished visiting professorship at Georgetown Law School. And remember that brouhaha over First Lady Jill Biden's insistence on being referred to as Dr. Jill? Somehow it is pretentious in a First Lady who has an actual job as an educator, but not for radio and TV personalities like Dr. Phil and Dr. Oz? Need I remind you that both of those men went on television at the height of the pandemic last year to urge the re-opening of society while Dr. Jill kept her husband safe and kept teaching her classes via Zoom. And isn't it ironic that it has been GOP women who have been willing to stand up for whatever is left of their party's integrity while the others are at CPAC with that golden bull**

Who told us to think or to speak or to redefine ourselves? Neera Tandem has been nominated to run the Office of Management and Budget, but her tweets (which is but her emails 2.0) are likely to derail her confirmation. And we'll just pretend that when Cabinet officials in the previous Administration were summoned for congressional oversight, they weren't disrespectful and hostile when confronted? Bills were introduced in the Georgia Legislature to Stop Stacey Abrams because of instead of trying to win on their ideas, it is more efficient to change the law to criminalize certain voters and re-label us as thieves. And if it wasn't already clear why folks can't stand Senator Rand Paul (R-KY), his antics during the confirmation hearing for Dr. Rachel Levine as an assistant secretary at HHS offer some insight.

Since we've worn Nevertheless, she persisted out literally and figuratively...I am here to share Dr. Gayles's wisdom: Claim your space! It needn't go viral (but if it does, all proceeds go to Spelman College). 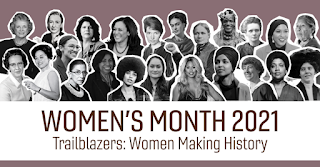 On the eve of this Women's History Month, we claim space to celebrate the two most powerful women elected to hold office in America; to highlight the fact that one of the lead researchers at the NIH for the COVID-19 vaccine was a Black woman; and to anticipate whether a Black Attorney General will send the worst President of our lifetime to jail. We need to claim space for all of the women who have been pushed into new entrepreneurial ventures and career paths because of the past year's disruptions. We need to claim space for the teachers who have rightfully demanded to be regarded as front-line essential workers and not as babysitters. We need to claim space for the health care aides, retail, and food service workers who make minimum wage and have not had the mixed blessing of working from home for almost a year. 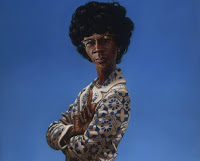 Let's Claim Our Space, and teach our daughters (and our sons) that there are no forbidden corridors, rooms, or tables to women. There are infinite possibilities. There are choices and options. There are challenges too, and obstacles and the likelihood of failure and success. All of that has been true for men as well. We came this far through constant struggle against odds that seemed insurmountable at one time, improbable most of the time, and illusory at other times. Shirley Chisholm didn't get to be President, but plenty of us have taken her advice and brought our own folding chairs in order to claim space at tables we set, but were not invited to sit.
Posted by Ayanna Damali at 8:21 AM