A bunch of folks are going around decrying 'cancel culture' the same way they stressed over and ultimately derailed 'political correctness' nearly 30 years ago. And it has been quite remarkable to watch history repeat itself--not only because it makes me feel old having witnessed the same brouhaha as a younger adult, but also because y'all still haven't learned from the mistakes of the past.

You can't allow folks who are comfortable with racism, sexism, homophobia, unchecked nationalism, and not wearing masks in public to re-frame all of this as just a PR battle over nomenclature. This is a war for our culture. You can't allow them to twist their evil insistence that no one deserves to be as offended as they are about having to change their ways into some kind nostalgic bullshit trip to Mayberry. CALL THEM OUT! Shame them. Make it unsafe for them to terrorize the rest of us with their revisionism. Don't get got again. 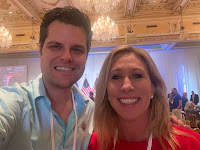 For example, a certain Member of Congress (Rep. Butthead of Florida) has been accused of having sex with minors, but there has been NO pressure on him to resign in disgrace, no incentive to do that obligatory damage-control press conference with his humiliated wife standing there with a look of concern slash wait-til-my-lawyer-bills-you-for-this-a$$hole. Maybe because he doesn't have a wife, his parents have disowned him, or just maybe that doesn't even matter anymore because he is 1st Vice President of the MAGA fan club and that grants him a lifetime pass to troll your daughters' TikTok. No hint of shame because now it is perfectly acceptable to pay minors for sex, just not okay to pay for their abortions...

That's not conservative (air quotes) by the way...

Another certain Member of Congress (Rep. Beavis from Georgia), one who has no official duties except to go onto the floor of the House to object to everything during debate has joined forces with the pedophile to keep hope alive that their DESPOTUS will rise again like the Confederacy. Mind you, she was a follower of QAnon, which came to our attention when one of their members stormed into a local DC pizzeria because he thought it was the underground headquarters of a child pornography ring assembled by Hillary Clinton and friends. Seriously. So the fact that this useless disruptor is now consorting with a man who is actually having sex with minors is, I don't know how else to say this...fucking insane???!!!

If these two are the spokespeople for decrying cancel culture--because America was greater when it was permissible to have sex with young girls (or young boys if you were a Catholic priest); to shoot kids at school (and then make up conspiracy theories to traumatize their grieving parents); or to lean into the debunked idea that Black/Latinx/Indigenous voters stole an election from a con man game show host during a global pandemic then maybe America should be doomed.

I know, it is more rational to denounce critical race theory and non-binary gender fluidity because those ideas are actually threatening. It is scary to think that one day little Johnny might come home from school and announce that he would rather not celebrate Confederate Memorial Day because that seems treason-ish. It is upsetting that Becky might want to get a COVID vaccine and wear a mask because she thinks freedom actually includes the right to make decisions for the common good. And what does it mean that your kids believe that we must Stop Asian Hate, that Black Lives Matter, and respect for law enforcement can co-exist as long as there is accountability on all sides?

The impetus for this rant is not the state of political affairs that declares Rep. Liz Cheney (R-WY), Rep. Anthony Gonzalez (R-OH), Rep. Adam Kinzinger (R-IL), Sen. Mitt Romney (R-UT), et. al. to be RINOs because they oppose the Orange Menace. Quite frankly, the fact that there is resistance to drinking the Trump Vodka (or Trump Ice for the teetotalers) is reassuring. Even if it costs them their jobs, so be it. Somebody in the Emerald City needs to expose the man behind the curtain as a two-bit carny hustler who needed the job. Plenty of people have lost far more for standing on principle.

I was inspired by a quote attributed to actor Jaleel White with respect to Bill Cosby, whom he described as having once been a mentor and a friend. During a recent episode of the TVOne show Uncensored, White proclaimed, "A revered man did a terrible thing, and now he is paying the appropriate price." And it wasn't all that complicated or offensive or pearl-clutching given that what Cosby did was terrible. He drugged women to have sex with them and then bought their silence. His terrible behavior earned him a cancellation in the form of ten years in prison. (Mind you, his sitcom is back on TVOne, so you can work that one out on your own.)

Cancel culture has meant that we have nearly bankrupted entire Catholic dioceses over the priest sexual abuse scandals. We are now seeing reparations paid by colleges and universities that enriched themselves through the domestic slave trade. Some powerful men lost their jobs for creating hostile work environments. And rightfully so in all instances. Sorry, not sorry that also means that you might have to re-think the legacy of a few Founding Fathers. Why does it matter more that Thomas Jefferson wrote the Declaration of Independence if he didn't intend for it to apply to his own children? Think about that: he kept a woman in a crawl space under his home, fathered her six children and enslaved all of them, but that just makes him complicated...not complicit in the evil that was American slavery. And the revelation that he had Black children is more offensive than a Black man driving around Virginia with tinted windows?

Wake up America! It is time for us to mean the words and embody the ideals we claim to hold sacred, lest we become the Klingon Empire. For all of you non-Trekkies out there, the Klingons are an alien species that tout the virtues of tradition and honor; yet, they tolerated vice and corruption to maintain appearances. In a pivotal scene, one character calls out her upstanding Klingon friend for not challenging the unscrupulousness of its leader. She tells him that he is in deep denial about the future of the empire--how it is in decline and deservedly so. She could just as easily be talking about America. We claim to embody all of these wonderful ideals, we send our young people off to the various corners of the globe to fight and die for those hallowed principles of liberty and freedom, but then we tolerate never having to live up to what we have espoused. We have claimed to be a nation striving to be more perfect, but if we continue on this present course, we will always be just one insurrection away from utter downfall. 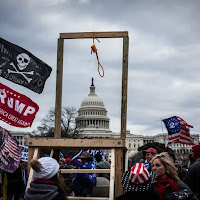 The appropriate price is prison for the priests, the police officers, the revered comedians, the corporate executives, the armed insurrectionists, the Members of Congress, and the former President and his co-conspirators. AND it is taking down the statues of the long dead rebellion leaders and removing their names from our military bases, highways, and schools. It means reconsidering the educational value of dated works of art that might well be reflections of their time when not everyone was treated equally or fairly. It is telling the full history of our founding, not the redacted version that makes you feel better about colonization and genocide. It is acknowledging our flaws, not posing with an upside-down Bible or a well-worn pocket Constitution for a cheaply staged photo opp. It is calling out evil and meaning it. It is not to remain complicit in the perpetuation of that evil because some people might have to admit that their heroes, family heirlooms, or fond memories came at the expense of someone else's blood, sweat, and tears.

To quote another intelligent Black man, LeVar Burton defined cancel culture as consequences for those who have gotten away with problematic behavior for too long. That consequences now apply to everyone means all of us must take responsibility for past sins and wrongs. You should get uncomfortable if you are still defending Bill Cosby (and others) instead of recognizing the pain he/they caused so many people. You deserve to be called deplorable if you regard Reps. Beavis and Butthead as patriots when you know that they serve no other purpose, least of all the needs of their constituents. Yes, we canceled the previous White House Occupant because one of the consequences of being too dangerous and despotic and deranged is that 8 million more people decided not to vote for him.

If you are worried about being canceled you might need to re-evaluate your life.