Send In the Clowns

It may or may not become a regular intention of mine to call out faux controversies involving our Vice President, but this weekend was one of those times when some folks need to be dragged. It seems that the disgruntled MAGAs who lost any shred of relevance as a result of the 2020 election have turned to manufacturing outrage on Twitter in order to get attention. It is very much like how my Kid will suddenly start dancing in the store even when there is no music playing or when she interrupts me on the phone to tell me that I look like whatever deranged cartoon animal that just popped into her head.

The professional provocateurs that use Twitter and other social media to keep people agitated about the election that was not stolen decided that their target this weekend would be Vice President Kamala Harris for a four word tweet. Four words, and they are fanning the flames of the next insurrection, because telling people to enjoy the long weekend is more egregious than being a draft-dodging liar who skipped a wreath-laying ceremony for World War I soldiers, called them losers and suckers because they're dead, and then blamed the weather because it might have ruined his hair.

How dare she not respond to their booshay until Sunday, the day before Memorial Day...I would refer to whatever patriotic sentiment the former President offered, but his account got suspended.

I didn't even see her tweet initially. I just saw that there were some rumblings about something she tweeted and as I am always curious about trending topics on Twitter, I went through her tweets and found out that she gave the commencement address at the Naval Academy. She also encouraged people to get vaccinated, responded to the latest attempt at local voter suppression in Texas, and hyped up whatever speech Biden gave or will be giving (because we know he always has something to say). Literally, nothing to see there.

But the hecklers need attention, so the first tweet I saw was posted by some comic named Terrance K. Williams. Now, I don't actually know if this dude is a comic since I typically encounter his moronic ramblings whenever he's outraged. I don't follow him, but this joker still ends up in my TL, so I clicked to watch him rant for three minutes about how disrespectful it was for Harris to tweet about herself on a day that isn't about her. And then it dawned on me that what is most funny about him is the oversized MAGA hat that looks to be bigger than his body.

I kept scrolling and came across another tweet by a set of twins, also comedians, who share the same MAGA politics. They took issue with Harris' statement on the new voter restriction bill that was passed in Texas, and felt the need to close their missive with Mrs first African American female Vice President. Bad punctuation aside, I just want to know why grown ass men still dress alike to emphasize the fact that they are twins. But the tweet that got me to typing came from former U.N. Ambassador Nikki Haley, who re-tweeted Harris' statement under the caption Unprofessional and unfit.

The respondents on Twitter already did an excellent job of dragging Haley, so I won't even waste too much of my Memorial Day musings pointing out how kind of desperate it is that she is still doing the sorority girl sabotage thing in hopes that it will catapult her to Harris' job. You're irrelevant and two-faced Nikki, and we can still see your lipstick smudges on Donald Trump's ass. Girl, bye.

So my goal here isn't to rehash anything that I have written about countless times in the past. Of course the loudest hecklers in the MAGA crowd are the people of color who must add on a Sandman tap dance to prove their loyalty to the cult (or they will be volunteered as tributes). I didn't even check to see what Candace Owens had to add because she's gotten boring and predictable. But no worries, because we know that she loves her some Seething Self-Hatred/Incredulous red kool-aid, and the holiday blend includes a little something extra to keep her cookout guests thirsty.

No today, I am in the mood to teach a little history. Although I alluded to the Tulsa Massacre in my tweeted response to Mr. Williams, I think we need to offer some context for the day. In addition, since we seem to be stuck on this notion that learning about painful historical incidents in our country's past is too upsetting for some folks (because it makes them feel some kind of way to learn the truth about that crazy costume in great grandpa's junk trunk), let's have a few words on that. And then because my weekend plans got scrapped due to bad weather and the Kid's first cold in months, I just feel like writing.

A year ago, I had a similar impulse to share the history of Decoration Day after I saw some pictures in the media of a protest in Kentucky where that state's Governor was hung in effigy for imposing mask mandates. I went in on this history to make the connection that for all of the patriotic displays and performances, most people have no idea of its origins or how even the remembrance of our honored dead contains facets of racism that some choose to ignore. Last year, it was the fictional lynching of a politician; this year, it is everything that has occurred since the Capitol Insurrection on January 6.

For me, that melee marked a turning point. I cannot unsee what happened. I cannot just move on from how very close I could have come to being caught up in that crazy had I not had the good sense to keep my daughter at home from her class playdate (and her teacher's decision to cancel it). I cannot get over how brazen these people were in erecting a gallows on the Capitol grounds or how determined they were in believing they had the right to do what they did. As a student of history, I have read about race riots and as someone who experienced a version of the disturbances that scarred Los Angeles 29 years ago (in Atlanta), I have still have PTSD and no use for people of color who carry water for MAGA.

I know that it was just 30 days ago that I wrote about Sen. Tim Scott (R-SC) and I'm already prepared that he will do his best Bert Williams impression for the cameras. But at least he takes the grease paint off to work behind the scenes to accomplish something other than making a fool of himself. The rest of the chorus line doesn't miss a step.

For in their performance of this weekend's MAGA dance, none of these clowns mentioned the historical significance of Decoration Day as the precursor to Memorial Day. You would think that a group of so-called Black patriots would use that to hit at Vice President Harris if she deserved to be called out. Surely they know that history...but wait, I forgot how mentioning any intersection with race and history is damaging to the feelings of their audience. Those are inconvenient facts and Critical Race Theory is illegal in Idaho.

As such, it is also worth noting that none of the Vice President's haters mentioned the events taking place in Tulsa, Oklahoma this weekend. Again, no one pays them to be topical or relevant, but if we're going to criticize Kamala Harris for being tone deaf, then perhaps she deserves a few jabs for not mentioning the historic significance of the Tulsa Massacre which occurred 100 years ago today. Alas, they can't credibly attack her on that front either since she met privately with the three survivors this past week when they were in DC to testify before the House Judiciary Committee. But since we are nit-picking her every move, she could have mentioned it and hopefully before the end of the day she will tweet out some official statement of commemoration. And I will await a response to see if the others offer similar sentiments. 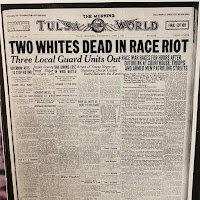 But I won't hold my breath. The MAGAs will call it virtue signaling and will argue that none of the white people who were responsible for the riots and lynching are alive today. As such, no one living today should be held responsible for the actions of their ancestors. That would be unfair, even if some of Tulsa's current residents know that their grandparents participated. Why should the sins of the past be visited upon the present? Besides, how do we know that some of those victims didn't deserve to die? Who told those Black World War I veterans that they could protect a man from getting lynched? And what right did their Greenwood community have to exist and prosper? Who told these Black people that they had rights that their white neighbors were bound to respect? Who said their Black lives should matter?

Don't go looking for those exact words in their tweets because they aren't that brave. No, the MAGAs would rather take aim at George Floyd and Andrew Brown, two dead Black men with troubled pasts, and argue that they didn't deserve to get clean, reset their lives, or breathe. They will claim that their violent uprising at the Capitol doesn't compare to the violence and destruction that we caused last summer. Mind you, we marched with signs to protest a man's death; they armed themselves with assault weapons to march on state capitols to protest wearing masks. They call us delusional for demanding a better America and perhaps we are because what have we learned from the Tulsa riots, the backlash to the 1619 Project, and how hard they work to suppress our votes...

Nikki Haley doesn't get a pass because she's Asian American and not Black. It is still Pacific Islander Heritage Month and she's from South Carolina, so close enough. By attacking Harris, the highest ranking Asian American woman in government, Haley thinks she is drawing a contrast with her would-be rival since Harris knocked her off her historic trajectory and derailed her ambition. It must hurt not to have a job that requires her participation in official functions today, but she can still enjoy the long weekend at the beach.

Send in the clowns to warm up the MAGA crowd who live for the performative patriotism of wearing $5 tee shirts from Old Navy. Send in the clowns who were complaining that masks and social distancing were infringing on their freedom to shop Memorial Day sales last year. Send in the clowns who keep thinking that their loyalty to these people will ever be rewarded with anything other than more greasepaint.
Posted by Ayanna Damali at 7:25 PM