Reflections on Ten Years of Being a Busy Black Woman

As of today (May 23), this blog is officially ten years old. Officially that isn't quite accurate since I started the blog in December of 2010 with a grand set of ideas and intentions. However, it was by May 2011 that I was beginning to make the moves to bring the vision into existence. On this date, I officially bought my domain name. In case you were wondering, I marked this occasion back then by writing about my patron saint, Oprah Winfrey, as she was about to transition away from her daily TV talk show.

I am in a moment of self-reflection again which means this isn't my usual intentional style of writing. I am sitting outside under my house (I have an addition that provides me with shade) and had been mindlessly scrolling through YouTube to find a video about a show that I watched as a kid. That was in response to a tweet to name the best 80s theme song (my response was the theme to A Different World, seasons 2-5, as sung by Aretha Franklin). I initially came outside to check in on my little garden.

EVERYTHING in my life starts off with a different intention...And the point of that statement was to mention how the point of this blog was to support an idea I had about selling tee shirts. I sold a few shirts ten years ago. I haven't sold that many more shirts in these past ten years, even though I produced more shirts, mugs, and have had other merchandising ideas. This is not intended to provoke guilty purchases (because I know that it won't), but I am just stating fact. My intentions at the beginning of this blog project were very different.

As I sit here, I am thinking of a few other intentions I've had over the years connected to this blog. The associated Facebook and Twitter accounts were supposed to help promote the blog, which to some extent I believe they do. However, I have become clear that those social media accounts (along with the Instagram account I started a couple of years ago), really just promote the Busy Black Woman as an alter ego of Ayanna Damali, the woman behind the blog. And maybe one day that will mean something.

After ten years, I have to admit to a mix of feelings about things. This is actually my third blog. It is my most consistent effort, although I still have unfinished writing over at the Café that I am still pondering in some form. I rarely update the Garden Blog, even though I have never really stopped gardening. I just haven't revived it, and right now it is doubtful that I will since I am back on pen and paper these days. As for the Café, I am unsure how to revive it or if I should given that in many respects, it is an earlier, evolved version of Busy Black Woman. I wrote about everything over there in its heyday, and once I started this blog, I thought that I would separate my writing personas so that BBW would cover a specific set of topics and the Café would deal with my private life. Then I suddenly stopped writing altogether for almost two years (my second major hiatus from writing) until I was about 8 months pregnant. I returned to writing on both blogs; however, sometime in 2018 it made more sense to write exclusively here.

On the one hand, I am a little bitter that it seems like I'm in the same place. I think my writing has improved and every now and again, I get positive feedback. But it is inconsistent. And I am unsure how to overcome that because I don't really know how I'm supposed to be creating and promoting my work while maintaining everything else in this Busy Black life. I have been reluctant to admit that for some time because I feel that writers are supposed to make a way through this. If no one reads our work, then we are just diarists. I should be cool with that, but after ten years, shouldn't I have more?

This year has been kind of full circle in that I am seeing growth and promise, but experience has me doubting whether anything will change. Twenty years ago, I hit a homer out of the park with a piece I wrote about Black music. I have alluded to that piece quite a few times, and it was sometime in the last two years that I found the hard copy of it again. The problem is that still feels like the high water mark of my writing career in spite of the fact that I am a much better writer today. Is that my imagination or is it the dissatisfaction and disappointment I feel that nothing since that point has gone in the direction I intended? 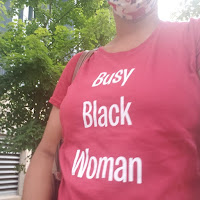 Is my writing supposed to a business, an art, or a ministry?

Yeah, I said ministry, because that word better describes the core of what I believe I am called to do. If I look back, I know that I wrote somewhere about writing being like the air I breathe--I cannot not write. So if that is true, then why can't writing be enough? It would be nice to earn money from it and great if more people read my work, but having been at this for twenty years how much longer should I wait to make it? In fact, it has been longer than twenty years...I recalled recently how I have been writing like this since elementary school. This is what I have always been, so perhaps this isn't the crossroads of wondering where to next. If there is to be a book (big question mark), then would it be to sell tee shirts and mugs, or would it be another vehicle to do what I have been doing all along?

Therefore, if writing isn't my job or my career, then it seems appropriate to call it my ministry. This is how I serve the world, through my art. I am an artist. My opinions are the medium I use to create. That's it. Those who hear my voice will respond, they will share it, or they won't. Maybe someone will pay for it, but I am no longer attempting to sell the concept of being a Busy Black Woman. That is a bold statement to make after all of this time, but after ten years of being the Busy Black Woman, I don't need a clique. I am a busy Black woman who writes, who is a caregiver (mother, wife, sister, daughter, and auntie), and who is still a civil rights lawyer. I am also a teacher, a dancer, a philanthropist, a proud Spelman Alumna, a Delta, DC native, and maybe I will stay busy by becoming a few more things.

And wow, saying that was not my intention when I started writing this...here's to the next ten years and beyond! 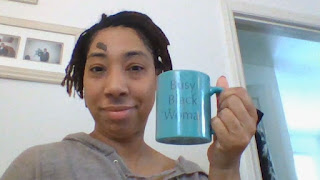 Posted by Ayanna Damali at 6:28 PM