Fear of a Black Princess

I'm still writing the piece from my adventures at Walt Disney World and another piece about Meghan Markle (that I started before the Queen died, so revisions are underway) and yet more unfinished pieces about several other topics that I hope to publish before the end of the year. 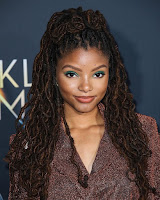 But I felt compelled to weigh in with a little extra emphasis on a topic that has been upsetting a bunch of folks on social media regarding the recasting of The Little Mermaid with actress Halle Bailey. Because y'all really need to chill.

I get it. You grew up with the original movie and loved Ariel because of her red hair. You saw yourself in a girl that was half fish whose best friend was another fish named Flounder. You understood exactly how frustrating it was to be followed around by a meddling Jamaican nanny crab named Sebastien. In your youthful naiveté, you too struck a Faustian deal with your Dad's nemesis in order to run away with some dude whom you hadn't actually met, because adolescent love at first sight always works out.

Having just visited the Magic Kingdom this summer, here are a few things you ought to know about your beloved princess. It pains me to inform you that Ariel went back to being a mermaid, so I'm not sure that things worked out with Prince Eric. I didn't see her featured in the midday parade, but I did see where she and Flounder have settled into a nice grotto in the Fantasyland section of the park, which must be the retirement community for forgotten characters. I offered to stand on line, but the girls were uninterested in stopping in for a visit, so I can't say if Ariel is actually a red-headed mermaid or if she was just some girl wearing a Wonderbra, a fish tail, and a wig.

So let's dispense with all of the wailing and moaning about how much you loved the original character. Of course you did, as did I more than 30 years ago when the film debuted. I was in high school, but I had a baby cousin, so when the movie was released on VHS, we bought it to watch with her. Something I learned then from babysitting (but forgot when my own daughter was born) was that little kids can watch the same movies and TV shows over and over and over. Therefore, for a time, Ariel was on a constant loop until other movies came out. Eventually she was replaced by Belle from Beauty and the Beast (1991), Jasmine from Aladdin (1992), and so on. Clearly, Ariel set the mold for the thoroughly modern 90s heroines, as the drama centered on her pursuit of happiness instead of being thrust into some calamity and having to wait to be rescued by some random hero.

Yet, when Disney re-branded their modern animated heroines as Princesses in the mid 2000s, Ariel was not chosen as the Queen Bee. Disney went back to its vaults to tap their classics: Cinderella, Snow White, and Aurora (blonde in pink from Sleeping Beauty). They promoted Belle (yellow) to a princess even though that's not how her story ended, and it was the four of them who were the original faces of the campaign. The nonwhite princesses like Jasmine and Tiana appeared in the supplemental marketing. Mulan, who had also not been a princess in her story, was featured on the side, along with Ariel who appeared in her human form. In some marketing, they included Pocahantas, and eventually other heroines were invited to join the lineup, including Merida (Brave), Rapunzel (Tangled), and Moana. Of course, when Frozen came out in 2013, it was all about Elsa and Anna.

You can call it a slap in the face to all of the ginger girls who were annoyed that blondes had more fun (even though Anna and Merida both have red hair). Or you can call it a shrewd marketing gimmick to entice middle-class Black mothers into buying more princess crap. But to deride this reboot as "woke" is how, colloquially, I know you effing lying! Are you seriously out here on Blue Ivy's internet whining about the original intent of a centuries old fairy tale that didn't even end with the "princess" finding her happily ever after because she dissolved into seafoam?

I won't go into all of the ways you look and sound ridiculous, but if some of y'all really started a white Christian nationalist Facebook group to protest the film, I honestly can't waste the bandwidth to explore how pathetic that is. I also will not gush too much about how precious it was to see the TikTok compilation videos of all the little girls who were in awe after seeing the trailer, because it might trigger my Fall allergies. But I will point out how one little girl asked if that was Whitney Houston, and yes, that really did touch my Maleficent heart!

My 7 year-old daughter will probably be just as enthralled by Halle Bailey in this movie as she was a few weeks ago when she saw Brandy in the 1997 production of Cinderella (and actually saw the late Whitney Houston in action as the fairy godmother). My daughter was also quite taken by Camila Cabello in her 2021 adaptation of Cinderella. She loves watching The Wizard of Oz (1939), The Wiz (1978) as well as Oz the Great and Powerful (2013). When she watched the upcoming Mermaid trailer, her reaction was the same as the others that have been shared. And you wanna know why?

BECAUSE SHE IS A KID! What did I say about them watching their favorite stuff on repeat a few paragraphs ago? I'm guessing that the unicorn phase we're in now will give way to a mermaid phase next year. And once she finds out that her favorite uncle Lin-Manuel Miranda contributed to the soundtrack...

As a former little Black girl who grew up with NO representations of Black princesses, fairies, superheroines, or space aliens, I have to question the sincerity of all you so-called purists. Anybody old enough to complain about having grown up on the original movie hasn't been a child for quite some time. Which is the reason for the reboot--y'all are in your 30s! I am almost 50. Thus, in my best impression of Leon inhabiting the spirit of David Ruffin--ain't NOBODY making pilgrimages to Walt Disney World to see a middle-aged mermaid sitting in a cave singing to her pet fish! 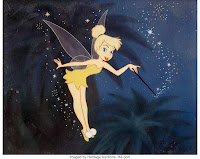 Disney tapped Halle Bailey because she's an It-girl. She's also very talented and beautiful. In the past when they've cast actresses for live-action versions of their movies and televised specials, they sprinkled their fairy dust on the likes of Julie Andrews, Mary Martin, Leslie Ann Warren, Sandy Duncan, Cathy Rigby, Hillary Duff, Lindsey Lohan, Kiera Knightley, and Anne Hathaway. I bet you didn't even question the logic of casting grown women to portray the boy who never grew up (Peter Pan), but let's not conflate issues here. The point is that you never raised an eyebrow when all of those white women got opportunities to become major stars. In fact, never in my lifetime have I heard where some white actor declined a role in an all-white production on the grounds that there was not enough diversity. Y'all barely took notice when a trending hashtag called out the disparities.

A better argument is the call for Disney to produce more original stories with nonwhite leads, and you'll get no pushback from me on that. The success of animated films like Coco (2017) and Encanto (2021) support that very point. It would have been great if that had become the norm when The Princess Diaries was introduced 20 years ago. Whitney Houston was one of the executive producers, Shonda Rhimes wrote the sequel, and perhaps if they could have convinced the powers that be to cast a young up-and-coming Black actress instead of Anne Hathaway, this debate might not be happening. I would have loved for Patti LaBelle to have been Kyla Pratt's royal grandmother. Looking back on that era, it was a big deal for Pratt to star in her own cartoon as Penny Proud. 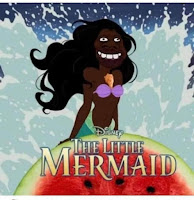 But this isn't an either/or demand for opportunity since calls for more diversity and representation pre-date the election of a Black President, a social media hashtag, and the protests after the death of George Floyd. This is a struggle that has been ongoing since before the original Little Mermaid film debuted in 1989. If it can be called progress that it took more than a decade to go from Brandy as Cinderella in 1997 to get to Princess Tiana in 2009 and then almost another 15 years to get to a Black mermaid in 2023, then this visceral backlash is exactly what we say it is. Because what else describes booshay like this and this 'fixed' trailer and this horrible picture?

Yeah, your racist slips are showing.

The world is changing, and I guess it has been quite the culture shock to realize that whiteness is no longer the standard by which everything else is measured. How awful must it be for your daughters to go to the Disney store and have their costume choices include Tiana, Moana, Mulan, and Rapunzel instead of being limited to the classic four princesses. However will your darlings cope with the realization that anyone can be a Princess (and again, I will simply mention that I will have a lot more to say about Meghan Markle in the coming weeks), but yeah, especially if you marry the right Prince?

As for your false equivalencies and double standards, those arguments are trash and you know it. Do you honestly think it would be "fair" to cast Carrie Underwood as Princess Tiana in some implausible live action version of The Princess and the Frog because in the entire pantheon of the Disney characters, one was reimagined as Black? Is that how you win the fight against wokeness--by demanding that a story that was itself an adaptation written to give little Black girls a princess should be recast? And are you intent to stake your flag and die on the hill that mermaids are of European origin because those are the stories that were published? Really now, because it isn't like colonizers have never profited from the stuff they stole from other cultures...

Too soon? Well, that's okay because that is another conversation altogether and Mami Wata is definitely not some lovelorn teenager.

Here is the bottom line: see the movie and judge it on the merits. Or don't see the movie, and blast it on social media because you're a racist or one of the former Disney cast members who spent half the day sitting alone in a cave hoping for a few visitors. Either way, inclusivity is not a fad, so I can't wait to see your reaction to the Latina Snow White.

Posted by Ayanna Damali at 1:44 PM