It is Fall, so that means Homecoming season is upon us. For those who can't say anything nice about certain institutions, now is your chance to talk all the trash you want until November. For those multiple HBCU graduates and homecoming attendees, now is the time to submit your leave slips, get those booster shots, and start hydrating over the next few weeks. After what feels like YEARS of being on lockdown, this October is about to be LIT!

A few of us got a warm-up two weeks ago at the highly anticipated return of the Morehouse vs. Howard HBCU New York Football Classic. The match-up, which had been an annual tradition for years, is one of several classic HBCU football rivalries, such as the Real HU Showdown and the Bayou Classic. These games are more about bragging rights than anything, and this revived Morehouse vs. Howard game had been known as the Nation's Classic ten years ago when it was last played locally at RFK Stadium. Someone decided to move it to New York City, so the true-believers like me who rarely make it down to Atlanta for Homecoming, made the trek up north and had a blast.

A few days afterward, I saw some buzz circulating about a dance team from the University of Southern California (USC) modeled after HBCU dance teams, framed by all of the stupid arguments that often follow about cultural appropriation and gate-keeping of Black culture. So with a hand on my hip, reading glasses on the tip of my nose, dressed in my best Auntie caftan, and head wrapped in a turban, I'm watching all of this and wondering why y'all are so damn sensitive about isht that really ain't at all that deep. 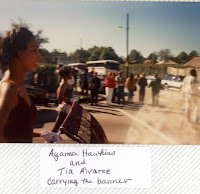 I put that visual out there to emphasize the fact that in embracing that level of Auntie-ness, I am in the unique position of offering some personal history that might put some of this in perspective. You see, way back in 1990, this was me --->

And every Fall, also at this time of year, this photo and a few others from this era of my life resurface on Facebook. Until this past summer, it was something that brought the requisite amount of cringe mixed with nostalgia, much like imagining that my parents could have been Soul Train dancers in the early 70s.

I got a rude reminder of just how Auntie I have become a few weeks ago when I was attending a birthday celebration for my college roommate. While talking to her teenage son about his college choices, I thought it would be cool to show him a picture of me from my marching band days. Y'all, that child recoiled in HORROR at the sight of me, and I swear I am still recovering from his reaction...because damn, I thought I was cute!

Well, that was almost 30 years ago, once upon a time when I was cute enough to go bra-less and high-step in go-go boots in a MILES-long parade route. Also relevant to this march down memory lane is recalling that this was the same year that the Morehouse Dance Team was re-branded as Mahogany in Motion, which was modeled after the famed Jackson State University dance squad known as the Prancing J-Settes. And because I feel like bragging on myself, I am one of the Founding Members (even though in real life, I was just the tall Banner Girl).

I won't take you all the way off course with old marching band stories, but it is important to point out that many of the HBCU dance teams and marching bands copied each other back then, and still do. Having just watched the dueling halftime performances between Morehouse and Howard, I can assure you that neither program is doing anything all that unique (even if I am eternally biased towards Dear Old Morehouse). If you've ever seen Drumline (2002), then you get that it is all just a show and at the end of the game, most of us only care about the tailgate.

As for this USC dance team stealing from HBCU culture...that's a reach in an era when everything is accessible on YouTube. This isn't like Bring It On (2000) with a bunch of suburban white girls spying on and stealing moves from an inner-city Black cheerleading squad. These are a bunch of Black girls who probably grew up watching movies like Drumline and Bring It On, so they already knew the deal. They have seen that step team episode of A Different World as many times as their mothers have reminded them that there were dorm step team competitions when they were in college. Even if no one in their immediate family attended an HBCU, it isn't like the "culture" is copyright protected against use by other Black people!

Like, do y'all understand that a lot of what you want to claim as HBCU-specific is actually an adaptation of other dance and musical traditions that have nothing to do with attending college? Seriously, watch a Lindy Hop dance number, a Second Line funeral procession, or go to one of these old store-front churches and watch the ushers march down the aisle during the collection. And then come back and argue with me about who appropriated what.

Of course, I didn't need to write a whole piece about why this is not or should not be a thing. Imitation, as they say, is the sincerest form of flattery. As we know from watching the evolution of rock 'n roll and hip hop, everybody samples, interpolates, remixes. This isn't to justify the way it often plays out, with somebody getting paid or becoming more famous than the originator, but I'm pretty sure that NOBODY who chose to attend USC over an HBCU did so because of the dance team. So listen to your Auntie YaYa: this ain't the hill to make your last stand.

Instead (and yes, I am headed there), I need the HBCU students and alumni who are so vocal on social media about USC's dance team to pay closer attention to other matters that are more urgent at our institutions. Do our dancers and band members have on-campus housing? Are they food secure and are their balances paid? Because if not...

Thus, I will say and emphasize for the folks in the cheap seats: AIN'T NOBODY CHOOSING USC OVER AN HBCU BECAUSE OF THIS DANCE TEAM! They are choosing USC because there are programs and resources available to them that are not accessible at most HBCUs. Off-hand, I don't happen to know what all of those amenities are but knowing a little bit about the program budgets at Predominantly White Institutions (PWIs), I am going to start by assuming that their dance team didn't have to hand-sew their own costumes like we did in 1990.

That doesn't mean that we aren't legitimately salty that these young ladies got a feature segment on the new Jennifer Hudson Show. I'm not sure that the J-Settes ever got that kind of exposure, except via this old reality show from 2014 on the Prancing Elites from Mobile, AL. More insulting is that even after all of this ruckus, all of the attention being paid to Jackson State isn't even about the dance team or whether the students have access to clean water.  It is about whether their larger-than-life football coach, Neon Deion Sanders is going to stay on the job for another season.

So why are we really mad?

Don't worry, I've got a few words for all of you Black PWI alumni who get some kind of weird glee at watching HBCU students/alumni engage in online foolishment. Ask yourselves why you need to replicate these cultural experiences on your campuses? The grass may be greener on your side of the fence, but you don't seem to be having nearly as much fun over there. We see you hanging out at our Homecomings wearing those HBCU-ish shirts like we don't know y'all are crashing the party.

Because this BYU dance team clip also resurfaces every Fall, I need folks to recognize that PWI bands have gotten hip and can play Cameo's Talking Out da Side of Ya Neck too. (OK, not at all the same...but that's the point. You know what's been up since Dreamgirls in 2006.)

Which is why I am here to tout the message that you already know needs to be shouted from the rooftops: HBCU Just Give!

I'm not saying anything you haven't read on this blog in the past. The issues facing our institutions are bigger than who got booked on a talk show, especially when that same host also gave a national platform to the new Fisk University gymnastics team. An HBCU is attempting to build a program that could produce Olympic-level Black athletes like Simone Biles and Gabby Douglass, but y'all are arguing on social media about who gets credit for twerking on television...

Don't raise Auntie's pressure with that nonsense. Put your money where your mouth is and just give.

Posted by Ayanna Damali at 9:06 PM